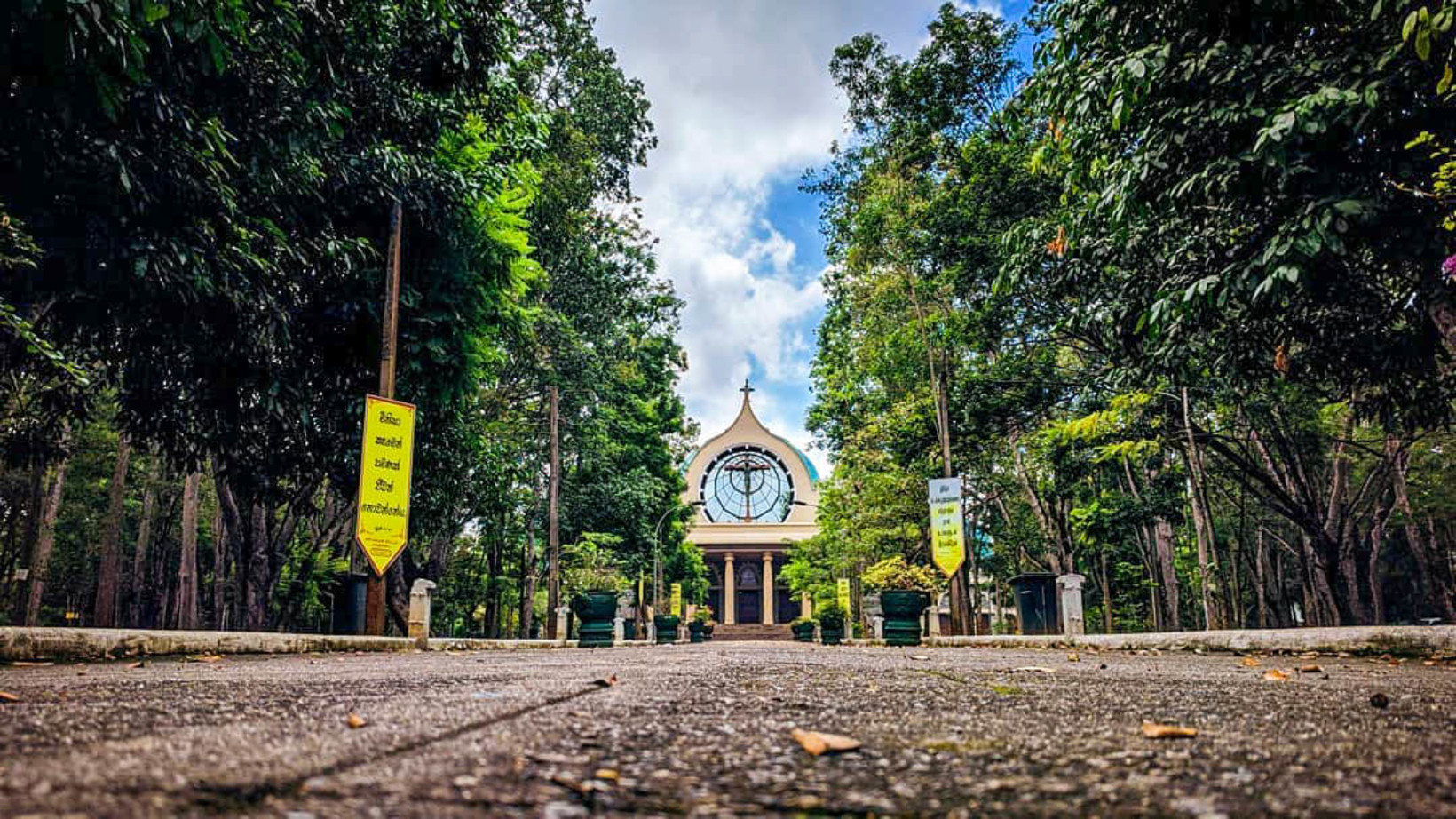 Our Lady of Lanka is a Roman Catholic Basilica in Thewatte, just outside the city of Colombo. It is one of the most popular Roman Catholic churches in the Colombo Archdiocese; and is visited by pilgrims of many religious denominations. One of the most unique characteristics of this Basilica is its atypical architecture that has elements taken from local culture.

What is a Basilica?

For those who are not aware of what a Basilica is, it is important to understand the word’s origin. Basilica originates from the Roman language and was meant to describe a large Roman public building, usually a court of justice. When Christianity spread in the Roman Empire, forming Roman Catholic sect, the term came to refer specifically to a large or important church given special ceremonial rites by the Pope. As it is, there are currently well over 1500 basilicas all around the world. Out of these, except for just a few major basilicas, the others are all minor ones.

The History of the Thewatte Basilica

Our Lady of Lanka began its life in 1911 as a tiny chapel dedicated to Our Lady of Lourdes (Mary Immaculate), France. It was built by the local pastor Fr. A. Kieger and a few Catholic laymen, and was a part of the parish of Ragama at the time. Years later in 1917 another pastor of the chapel Fr. A. Collorec had a grotto built for Our Lady of Lourdes, with the assistance of some Catholic workers from Colombo. With time the place became more popular, as the local Hindus and Buddhists started attending the services as well. This led to the chapel being expanded into a church in the 1930s.

However, its true rise to fame occurred due to the former Archbishop of Colombo, Jean-Marie Masson. During the outbreak of the Second World War, Archbishop Masson made a vow. Masson knew that Ceylon was pretty much smack-dab right in the center of the world, literally. If any of the major powers at the time decided to use the island; they definitely would gain a huge advantage and may even be able to win the war. But at what cost? The island and its people would be destroyed by the wars of the larger countries. So prayed to God and vowed that if Ceylon were to be protected from major conflict, he would build a Votive Basilica under the title Our Lady of Lanka. His wish came true and Ceylon was indeed spared from any major warfare. The Archbishop was delighted and in 1946 he obtained approval from the then Pope, Pius XII, for the construction of a basilica in honor of Our Lady of Lanka.

Sadly enough, Masson died the following year before he could see his efforts reach fruition. However, his successor Archbishop Thomas Cooray did not let the project vanish into the ether. Cooray took on the responsibility of ensuring his predecessor’s vision was realized; and he worked hard and in 1948 the Pope Pius XII established the Mary Immaculate, to be known as Our Lady of Lanka, as the principal Roman Catholic patroness of the island. He then acquired a nearby rubber estate and had the basilica constructed on the amply sized land. Many shady local trees such as Neem, Na and etc were planted to give a place for future pilgrims to rest under.

On February 4, 1950 the cornerstone for the basilica was laid. Construction was done with great care and creativity for many years. It was completed in 1974, a year after Pope Paul VI endowed the church with the title of Minor Basilica. On February 6, 1974, the consecration of the Basilica and crowning of the statue of Our Lady of Lanka took place; making it the National Basilica of Sri Lanka. To this day it received tens of thousands of pilgrims annually, making it one of the most popular churches in the country.

The architecture of the Basilica is a charming mix of local and traditional architecture. It is a marvelous Asian cultural symbol designed by Fr. Heras that includes a lot of local historical, cultural and archaeological components.

The front porch of the basilica is supported by six Grecian looking pillars, to commemorate the number of dioceses in Sri Lanka during the Second World War; the war that was the central influence in creating the basilica. The porch is crowned by a two-dimensional flame like design, the center of which is hollow. That hollow circle is set with glass panes pieced into an intriguing spider’s web; and at the centre of the web is a cross bearing the figure of Christ. This bronze figurine was sculpted by the Sri Lankan artist, Leila Peiris. It was made with a resemblance of Christ’s face on the shroud of Turin, as per the insistence of the Cardinal. The glass panels and the cross front a high arched corridor with a ribbed roof reminiscent the entrance of the Ajanta caves in India.

On both sides of the roof rise two spires on top golden cupola-like bell enclosures. These resemble modern Hindu Temple gopurams. The central dome has the typical Eastern Oriental Church cross featuring three horizontal bars. The cruciform adjoins the semicircular roofs of the Basilica’s extensions, which are made of aluminum, and painted a tranquil blue. The walls of the Basilica are made of solid granite, and are punctuated by large wooden doorways with ornate Indian architraves along the top. Embedded into the walls in between the doorways are 45 artistic faux bronze relief tablet created by Dr. Sarath Chandrajeewa. They depict the ancient beginnings of Christianity and the religion’s contribution to the country’s culture and heritage.

Inside the basilica, once a person enters, their eyes are drawn to the apse painted a beautiful sky-blue and flecked with artistic clouds. The apse forms a backdrop for the life-sized statue of Our Lady of Lanka, depicted standing on top of a snowy mountain peak. The next thing that draws the eye, is the open floorplan with a lack of pews. Most devotees just kneel on the floor. For the more picky ones there are a few small pews along the edge where they can kneel and place their prayer book. But these don’t come with attached bench seats. During main services, temporary plastic seating is brought in; but at other times the wide open space gives a feeling of majesty and light. The main altar is made of a block of undressed white stone brought from a quarry at Kirimatiyagara. The railings are made of a variety of wood types; causing it to give a multicolored lustre to its surroundings.

Other things of note within the chapel are the Holy of Holies that contains a tabernacle, which is a perfect replica of the Ark of the Covenant with measurements taken from the Bible; and the recently refurbished Blessed Sacrament Chapel, situated in the crypt where Cardinal Cooray is buried.

The outside of the Basilica has plenty to see as well. These include the four convents, the Museum and Jubilee Hall, the Retreat House, the new and old grottos of Our Lady of Lourdes, the bathing pond and lake, the old church and etc. The right end of the basilica gives a panoramic views of Adam’s Peak early in the morning. However, more recently the shady trees planted around the basilica have grown to obstruct the view.

Piligrims visiting the church may wish to follow the ‘Way of the Cross’. The Stations of the Cross begin from the left of the old church and winds alongside the bathing ponds, the grotto and the mission house. It ends where a special dais is reached in front of the Basilica and this is the twelfth station that commemorates the death of Christ on the cross. 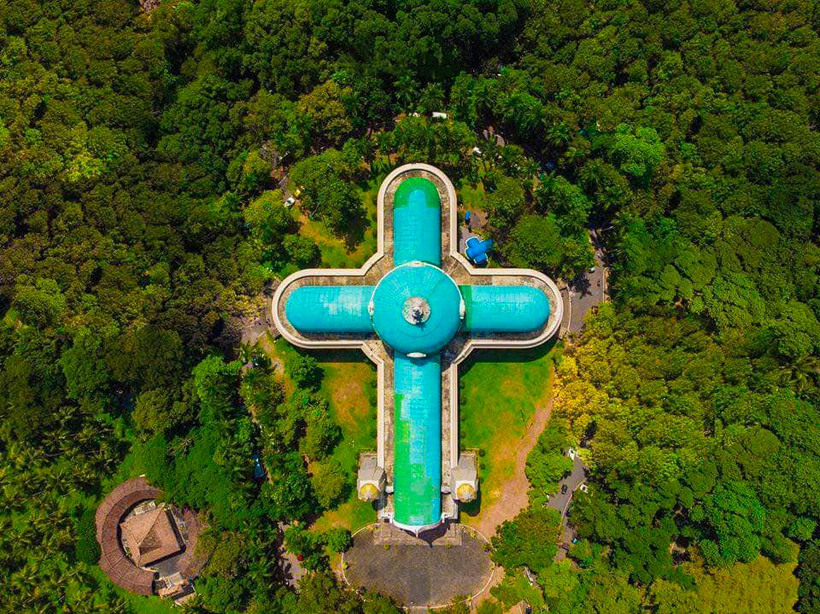 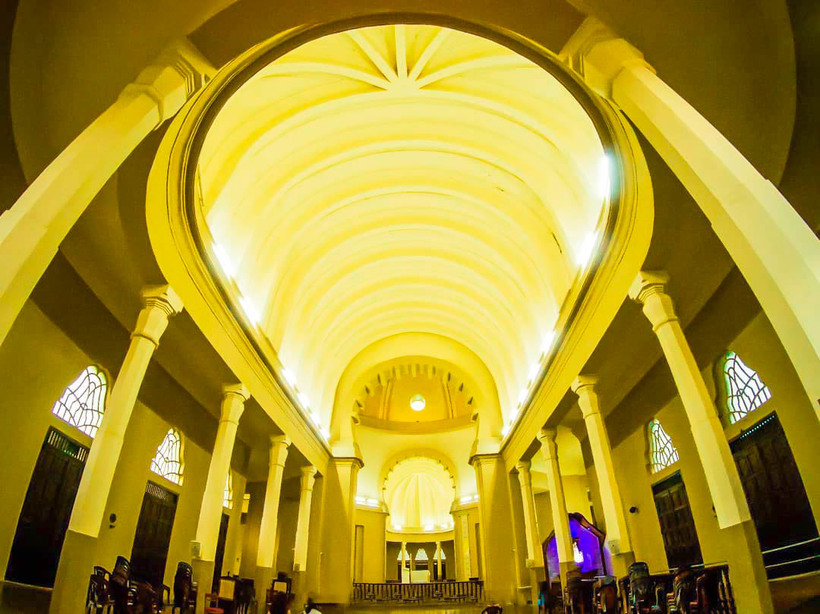 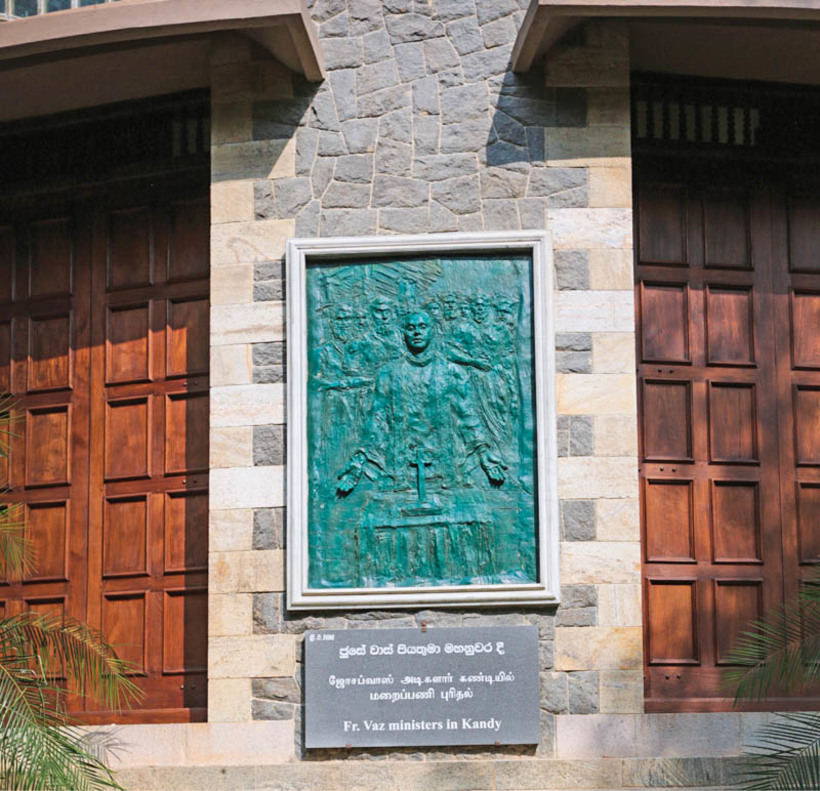 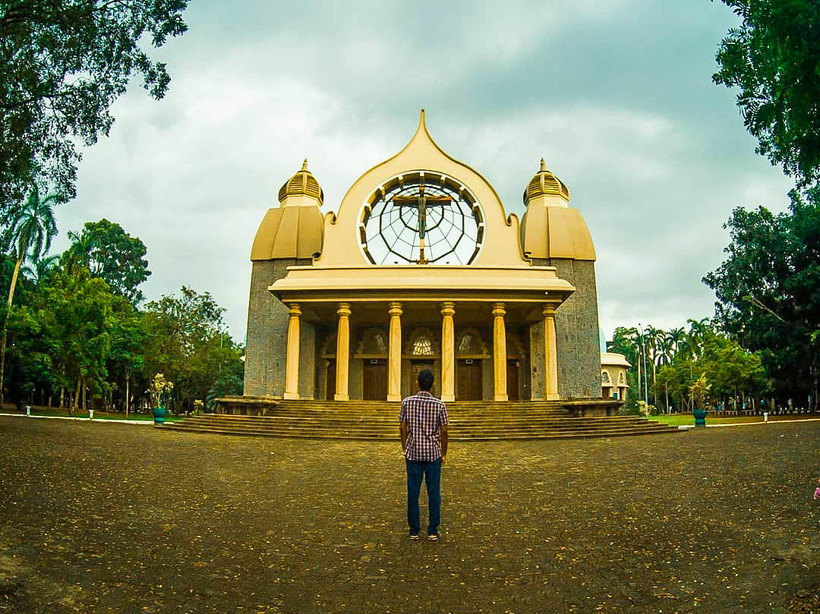 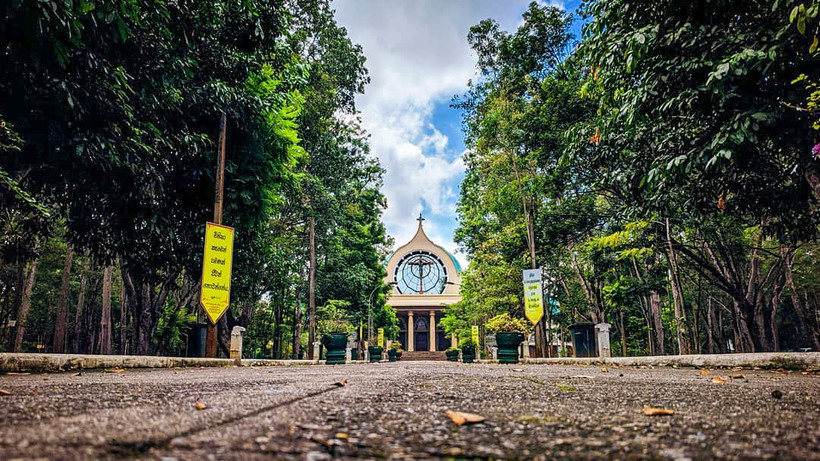 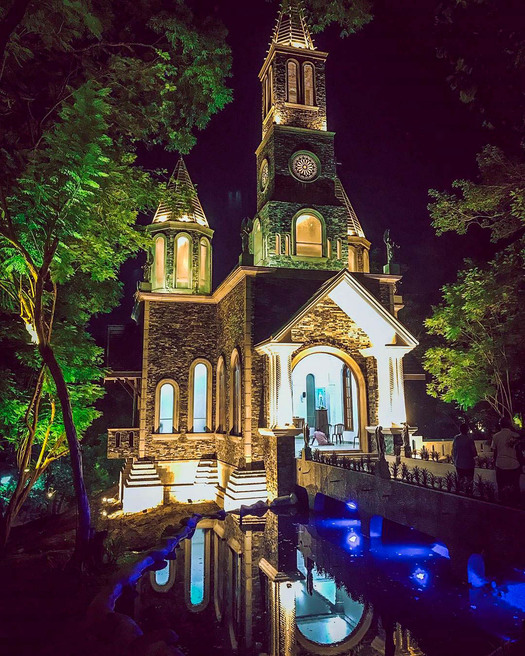