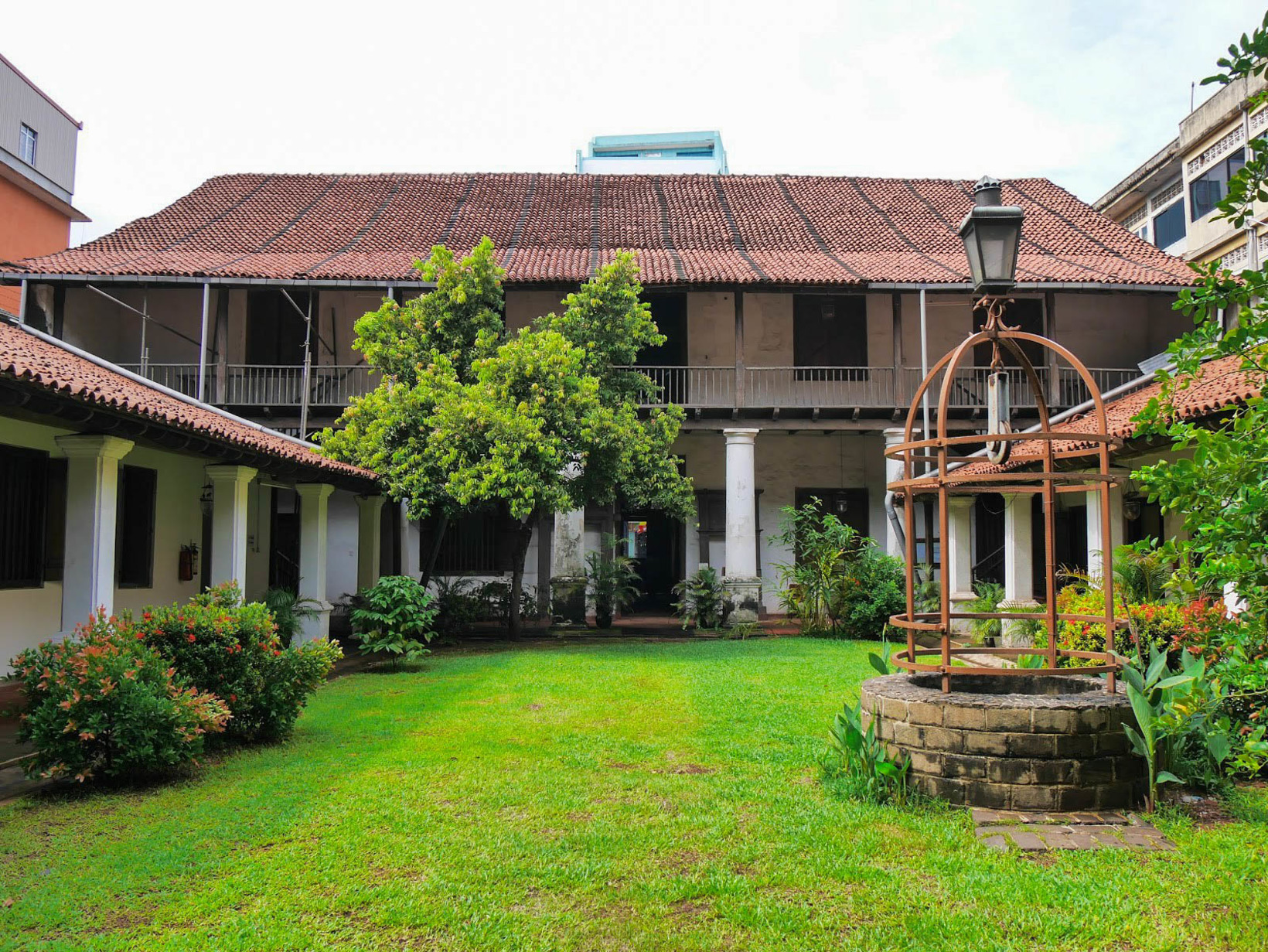 In the late 1600s the Dutch era had just started in Sri Lanka. The Dutch were proceeding to destroy all traces of Portuguese occupancy so that their presence would be indelibly established amongst the masses.

They also built many structures to suit their purposes; and Colombo, which had been a port of great importance to the Portuguese, became one of their target locations. The Dutch built hospitals, churches, residences, military barracks, and much more. Amongst these resplendent structures was a colonnaded two-story building, the best of the Dutch architecture from the era.

The building was built in 1692 to be the residence of the Governor of Dutch Ceylon, Thomas van Rhee. Governor van Rhee’s term of office came to an end in 1697, and the structure lost its use as a residence for the Governor. The Dutch had no interest in letting such a big and luxurious (at the time) structure go to seed. They used it for a variety of purposes over the years.

For the next several decades, the 17th century Dutch urban-style residence functioned as a seminary. It became an institution the Dutch used for educating the clergymen who later served in the churches that were being built by them. Towards the latter part of the 18th century, it also served as the residence of Colonel August Carl Frederick Von Ranzow. Afterward, it became an orphanage under the supervision of deacons from the Dutch church and was financed by the Dutch East India Company.

In the late 1700s, the British invaded, and in 1796 the rule of the much-contested island of Sri Lanka was taken over by the British. Another round of building and restructuring followed their arrival, as once again the British tried to erase as many traces of their predecessors, or at least make what was leftover part of their own culture.

The structure of the Dutch Museum, which until then had been an orphanage, got converted into a military hospital to handle the wounded from the battles that the British were waging in the vicinity of Colombo. It served as a hospital for almost half a century, until it became converted into military barracks in the latter half of the 19th century.

At the turn of the century, in the year 1900, the British decided to convert the place into a police training school. It served in such a manner until the year 1932 when the old Dutch building became the Pettah Post Office in the now flourishing city of Colombo.

The Fall of a Monument

Though the building was large and spacious, and quite comfortable for the purpose, it wasn’t to be for long. In 1971, the age-weakened outer walls collapsed during the heavy monsoonal rains of Sri Lanka. The entire structure was deemed dangerous and immediately abandoned.

Restoration and opening of the Museum

With the location being a valuable piece of real estate, as it was right in the middle of the business center of Colombo at the time, the ruined structure was slated for demolition by the government. However, intense protests by the Royal Asiatic Society and the Dutch Burgher Union prevented such plans.

In 1973, a decision was made to restore the building and convert it into a museum for Dutch colonial-era artifacts. As such a committee was established with representatives from the Ceylon Tourist Board, the Department of Archaeology, the Netherlands Alumni Association of Lanka, and the National Archives.

Meetings were held and plans made, In 1977, restoration was started on the old Dutch building with the sponsorship of the Netherlands government. The structure was rebuilt to the exact specifications of the former building and was completed in 1981. It portrayed the unique architectural features of a colonial Dutch townhouse.

The structure opened its doors as a museum to the public in 1982. Over 3000 Dutch era artifacts were stored and displayed there. Amongst the displays were furniture, ceramics, coins, and weaponry that showed off the many facets of contemporary life and culture in the Dutch Colonial Era of Sri Lanka.

In 1999, the value of the Museum as a historical monument was recognized by the Sri Lankan government. On the 18th of June 1999, they formally declared it an archaeologically protected monument of Sri Lanka under Gazette Number 1085.

To this day, the artifacts in the Dutch Museum and the history that pervades its halls make it a huge draw for locals and tourists alike.