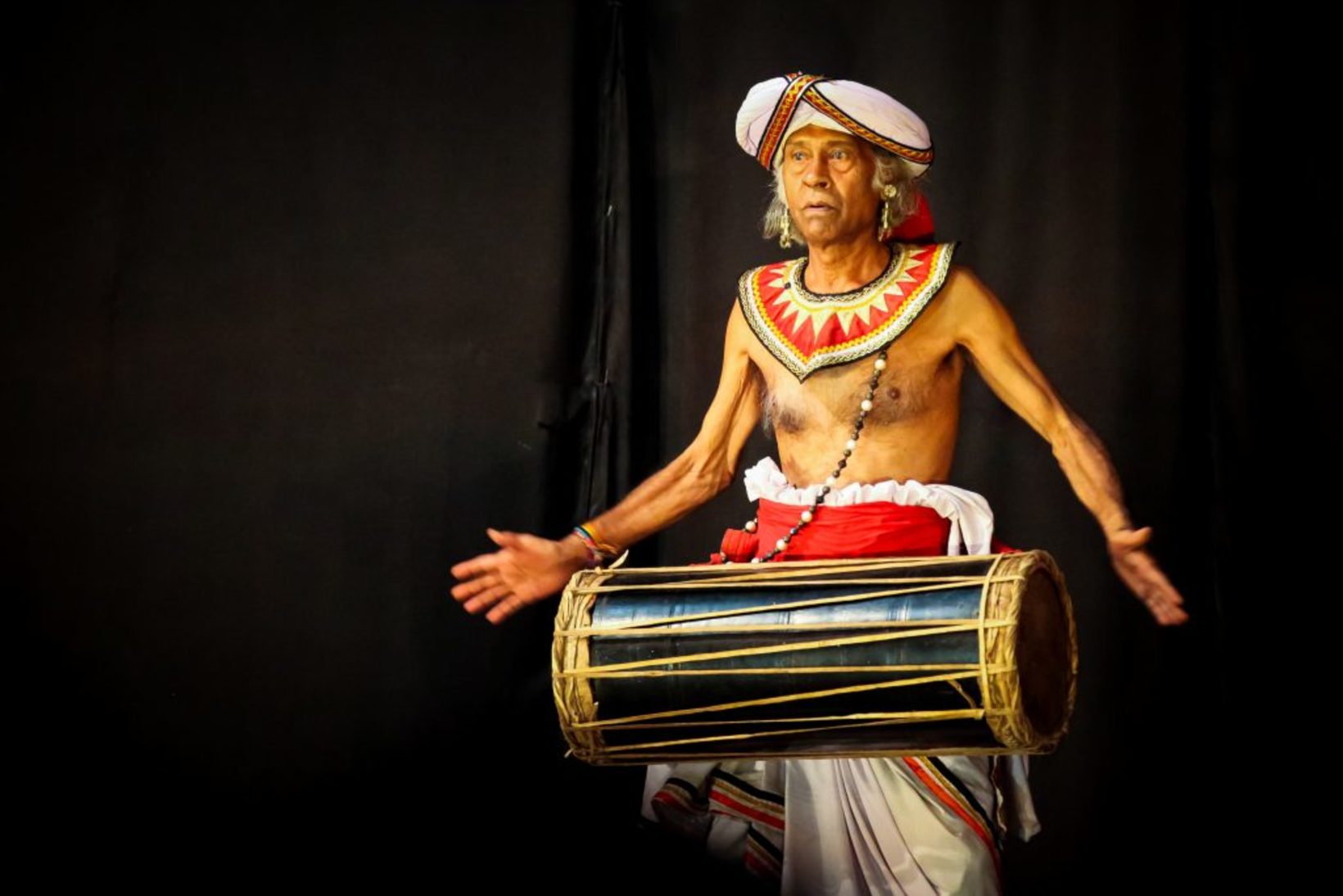 This hill country drum is called the Geta Beraya (a drum with a knot) according to its shape. This is the main drum used to accompany dance sequences in all Kandyan rituals. The two faces of the drum are described as ‘left’ and ‘right’. The right side is covered with the hide of a monkey or monitor lizard and the left side is covered with cattle hide, which is used to provide a finer sound. Since the drum is usually played at open air venues, the sound carries quite a distance. This drum is turned out of wood from Ehela, Jak, Kohomba and Milla trees. Various parts of the drum have separate names and is played by tying around the waist.

A drum employed by Hindu devotees of Sri Lanka during religious and social activities. It is used to keep rhythm during these functions. This practice originated in South India. The accepted belief is that when the body of the drum is shorter it begets finer tones. Therefore, drums of various sizes are used by the musicians according to their needs. The diameter of one face is about 5 to 6 inches and it consists of 3 planes of hides. They are known as Veddu Thaddu (Meettu), Koddu Thaddu and Saatham (Karanai). The drum is played while seated, positioned on the player’s lap.

This low-country drum is also called the Ruhunu Beraya, Yak Beraya or the Goshaka Beraya. It is used in the southern coastal areas known as the Pahatha Rata’. The Yak Beraya is the main drum used to accompany dance sequences in this region of Sri Lanka. This cylindrical drum is covered with the stomach lining of cattle and turned out of wood from Kitul, Coconut, Kohomba, Ehela and Milla trees. The drummer plays the instrument by hand whilst tied around the waist. Some players decorate the trunks of their drums with various motifs or fix stainless steel bars around the body.

The Maha (big) Rabana or Banku (bench) Rabana which is played by two or more people at a time is used at wedding festivals and Sinhala New Year Celebrations in Sri Lanka. It also symbolizes the spring festivals of the country. Generally women are the best players of the Banku Rabana and a special system of Raban Pada is in practice among them. One reads out the beat loudly and plays it in collaboration with others. Some of the onlookers would enjoy the music with dance in order to tune it for better sounds. The Rabana is kept on three wooden trunks about 18 inches high and the leader kindles fire under the instrument so that it can be tuned for finer sounds. The face of the instrument varies in diameter from 24 to 48 inches. Apart from playing the Rabana by hand, some elders use eakles as well.

The Thammattama consists of two separate pieces. It is called the Pokuru Beraya and is also referred to as the cluster of drums. This twinset of drums are of different sizes. As this is a twinset, it is termed `Ubhayatala’. The top side is covered with cattle hide and the body turned out of wood from Milla, Kohomba, Jak and Ehela trees. The left side produces low pitched tones while the right produces high pitched tones. These drums are played with two special sticks fashioned out of Kirindi. The Thammattama is an essential instrument during religious services at Buddhist temples and shrines.

In shape, the Bummadiya is like a water vessel or a clay pot. It is prepared after burning in a kiln. This instrument has only one face and its diameter is between 6 to 8 inches. Animal hides (goat, monkey or monitor lizard) are used to cover the face. In Kandyan villages this drum is played while harvesting paddy. The body of the drum is decorated in colourful motifs. The drum is hung on the player’s shoulder with swppert of a Savaram or connecting wire. Kala Ham or Kalabera are synonyms for the Bummadiya.

The Daula is the main musical instrument utilized for the rituals of the Sabaragamuwa tradition of dancing. It is an essential instrument in the Buddhist ceremonies and Hevisi performances. The Daula is used in the religious services (theva) of Buddhist shrines and in religious processions. The drum is 15 inches in length and has an approximate face diameter of about 16 inches. The body of the Daula is painted in colours and in the hill country these decorations are known as `mevara kireema’. In this exercise, ancient motifs are usually painted on the instrument. Both faces of the drum are covered with cattle or goat hide. One face of the Daula is played with a stick known as a Kadippu, and the other by hand.

The Udekkiya is a very handy drum predominantly used during Kandyan rituals and folk dances. It is played with one hand while handling and controlling the sound by pressure applied on the string and Sawarama with the other. Various types of wood such as Handun, Jak, Ehela, Gansuriya and Kohomba trees along with metals like silver and brass are used to carve and construct the drums. Wooden structures are gaily decorated with lacquer work. The drum faces are covered with goat, monkey or monitor lizard hide. The length of an Udekki is about 11 inches. The middle is thin and named `giriya’ or `gela’ which means neck in Sinhalese. The face called “Valayama” is not used to produce sound in this drum.

The Maddalaya, used in the operatic folk dramas known as Nadagam, is of South Indian origin. Present day Sri Lankan instrumentalists too employ this instrument, which is prevalent among Indian musicians under the rubric of Suddha Maddalaya, Tamil Drum, Mridangam and Mattalam. The Maddalaya has two diametrically different drum faces. A powdery paste is applied on the left hand face and the other is covered with an oily paste. In a Nadagam two drummers are engaged, one plays the minor beat and the other, the major beats. According to research, the musical system of Maddala playing consists of seven tala, namely Pasan, Kadinam Pasan, Kobehara Pasan, Vadimudi, Tirlana, Thangapatta and Tillana Keertanam.

Hindu devotees in Sri Lanka employ the Tavil drum of South Indian origin, during their secular and mundane rituals or festivals. The length of the Tavil drum is nearly 18 inches and it is made out of Jak, Kohomba and Ehela wood. The faces differ in size whereby the right hand face is about 10 to 12 inches. One side of the drum is played with a stick, known as Tavil Kali made out of a flowering plant called Tirruvacci. The other side of the drum is played by hand, and the drummers wear rings on their fingers. The hide of goat is used for both faces. The drum is hung with a string called Nada which is connected with an iron ring. 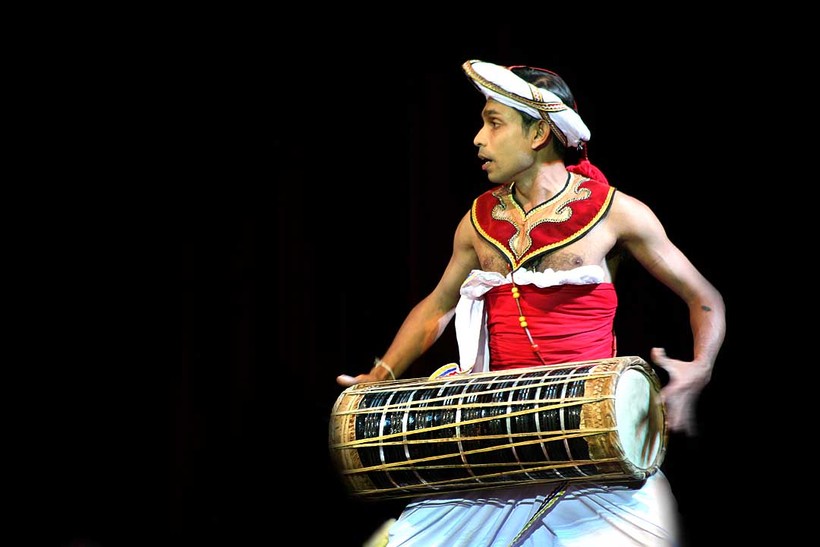 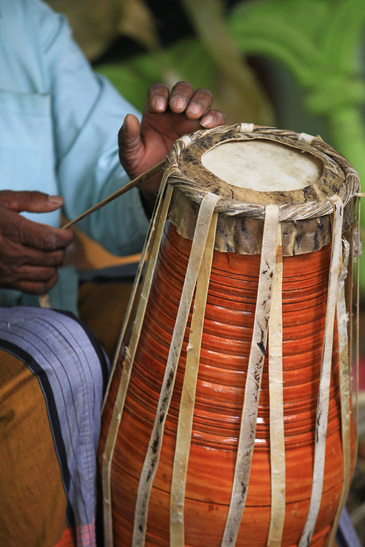 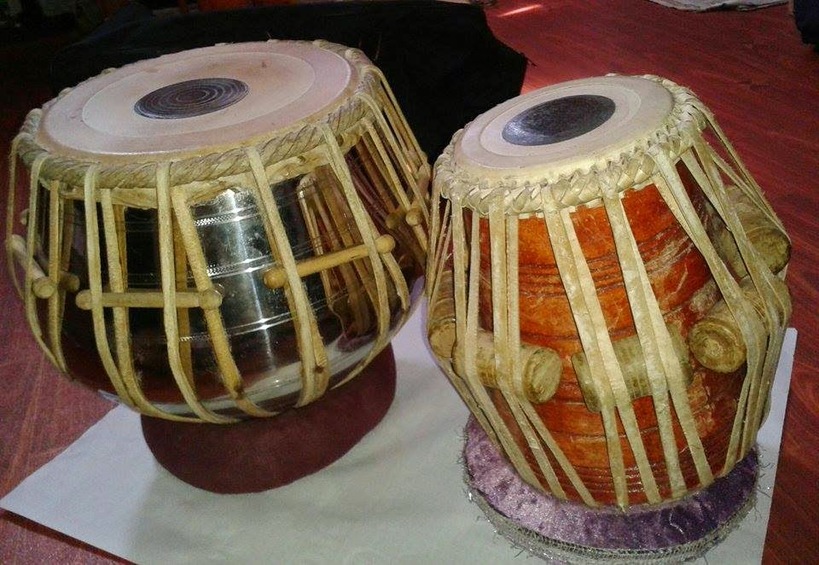 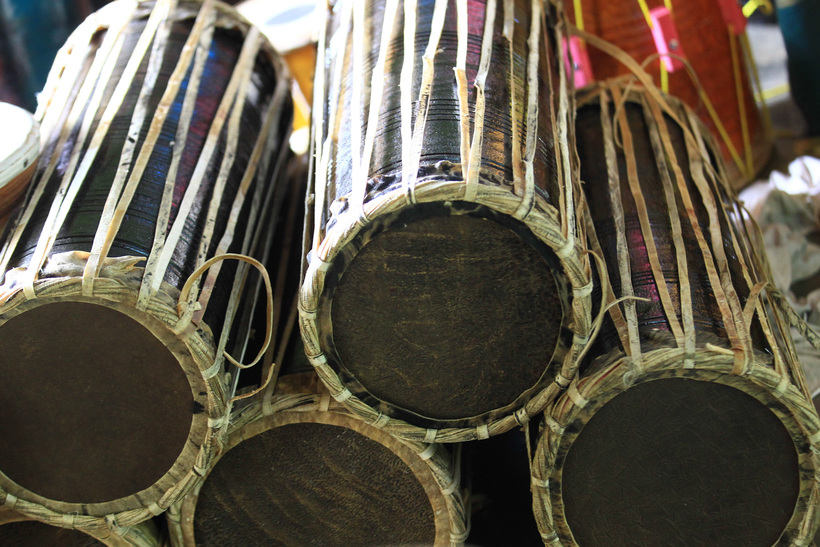 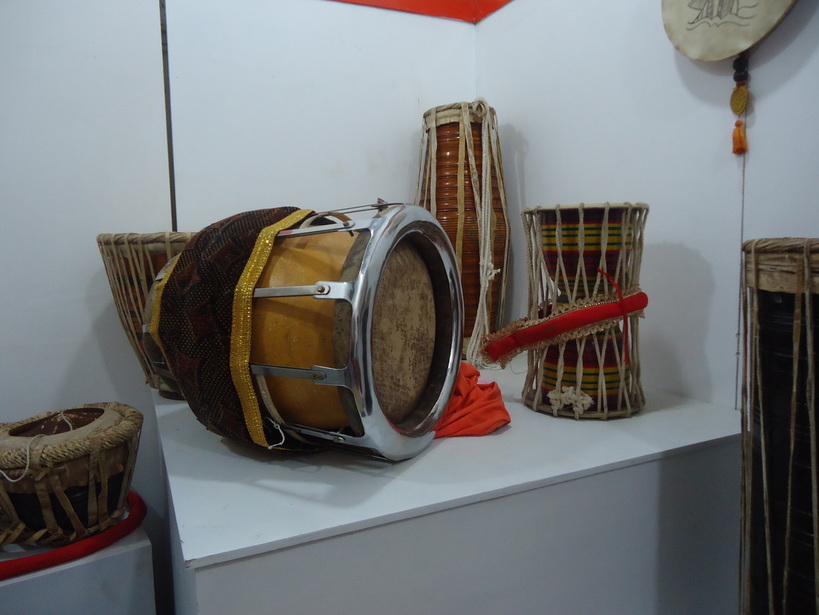