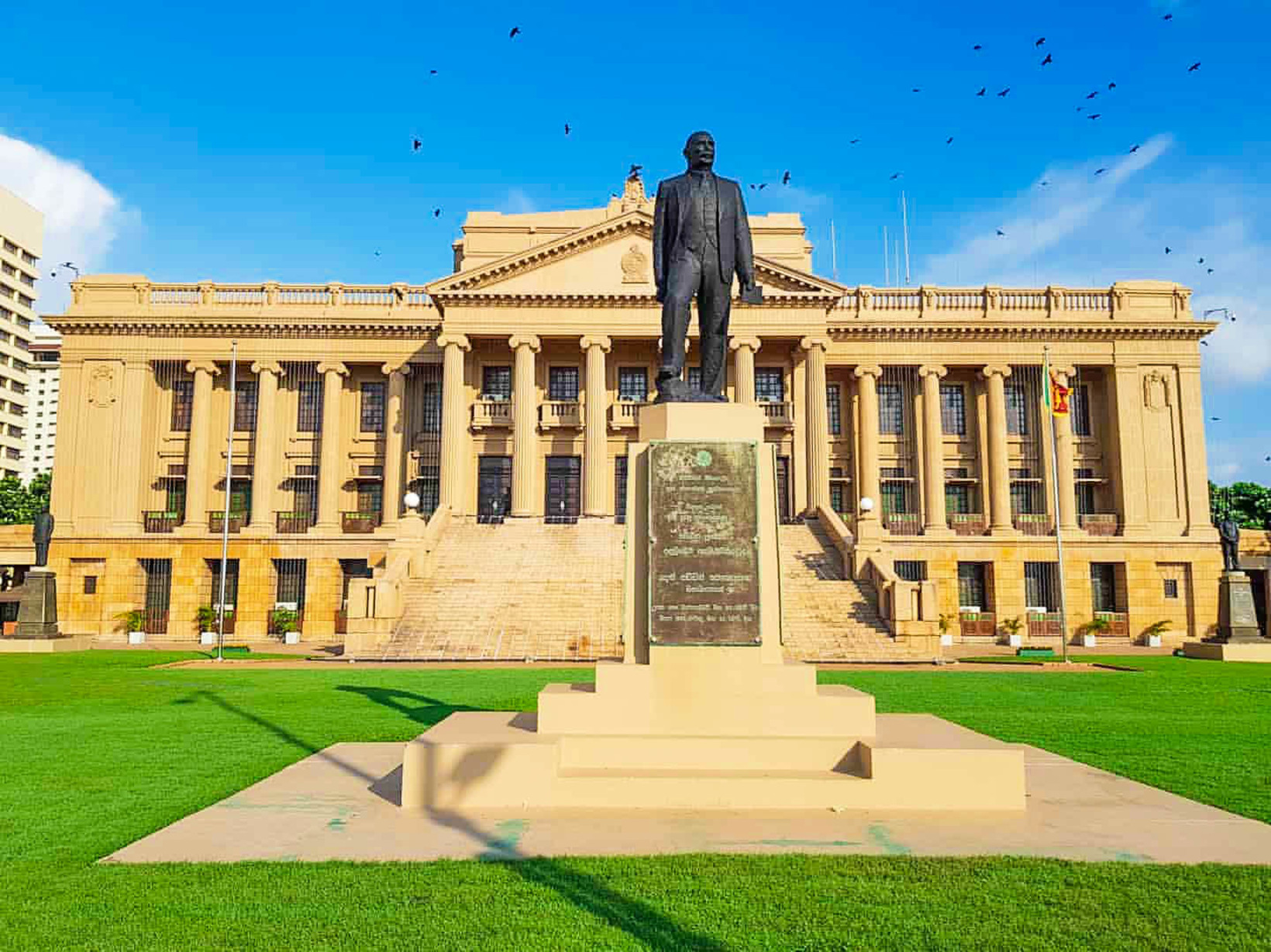 Old Parliament Building in Sri Lanka: The Center of Administration

Travelling past Colombo’s Galle Face Green towards the area known as Fort, a cityscape looms. In the background, silvery skyscrapers and cream-colored buildings dominate. You will notice a building close to the sea whose dimensions are in complete contrast, being several hundred meters long and only three storey’s high.

This Neo-Baroque-style building was built during the British colonial era to house the Legislative Council of Ceylon. It was built on an idea of Sir Henry McCallum, which led to a proposal made by a committee to construct the new building for the Secretariat, Council Chamber and Government offices on reclaimed land at the northern end of Galle Face’ were accepted by the Government in 1920.

The chief architect of the Public Works Department, A. Woodson was responsible for the design of the building with his initial estimate of Rs 400,000 for the scheme being later revised Rs 450,000, taking into account the extra expenses involved.

The building was declared open as the Legislative Council on January 29, 1930, by Governor Sir Herbert Stanley. He expressed the desire that “all the deliberations, which will be conducted within these walls may serve to weld the several communities and classes of the population together into an organic unity of national life and national progress, not by the suppression of varying traditions but by their co-ordination on a basis of mutual respect.”

The revivalist architecture of the Old Parliament Building in Sri Lanka integrated exquisite columns of the classical “Ionic” design, gently fluted towards the capital with a representation of two opposed scrolls. The façade of this magnificent building has an entrance reached by ascending many flights of broad steps. At the top are six columns supporting a traditional triangular pediment, and on either side are four more columns. Along the length of the structure is a series of colonnades, a pair with eleven columns each. The building has been aptly described by Sri Lankan architectural historian Ismeth Raheem as a “masterpiece in stone”.

Woodeson gave the building an open outlook so it would receive the maximum benefit from cool breezes. He was also wise enough to locate the Council Chamber on the east side of the building, away from the noise of the sea and sheltered from the afternoon sun. Incidentally, the initial estimate for the construction was 400,000 rupees, which was later revised by the Public Works Advisory Board to 450,000 rupees.

Great care was taken by Woodeson with the interior design, in particular the working environment. Cork carpet and linoleum were used to minimize noise. Lighting is indirect and secluded. Within the Chamber, the acoustic properties are as perfect as possible. Ventilation was provided by air propelled into the building by basement fans. Under members’ seats were adjustable grills through which the air flowed, thus eliminating the need for electric fans that so easily disturb public speaking. In addition, the
illumination of the upper portion of the Chamber is achieved by means of the reflection of floodlights fitted outside the topmost windows.

The British Coat of Arms adorned the top of the building face till 1948, when it was replaced by the arms of the Dominion of Ceylon and was once again replaced in 1972 with the arms of the Democratic Socialist Republic of Sri Lanka.

Since 1983 the Old Parliament, as mentioned earlier, has functioned as the Presidential Secretariat and the Office of the Executive President. This is where all important official announcements are made and appointments of state administered. The building, especially the former Council Chamber, is also the venue for various state functions. In addition, the letters of credence of arriving ambassadors and high commissioners are accepted here by former President Mahinda Rajapaksa.

The front garden of the Old Parliament Building is host to several bronze statues of eminent statesmen;

Nowadays there is nothing other than passing traffic to diminish the view of the Indian Ocean from the west-facing frontage of the Old Parliament. But during those early years in the 1930s there was a former guardroom on the seafront that served as the headquarters of the Boy Scouts Association of Ceylon.