Sri Lankan kings ruled the island from the Kingdom of Polonnaruwa from 11th century until 1310 CE. The city of Polonnaruwa is situated on the left bank of River Mahaweli. Archeological evidence and accounts in chronicles suggests that the city is as old as the kingdom of Anuradhapura. According to the most accepted one word is derived from conjunction of the words Pulun which means cotton in sinhala and Maruwa which mean exchanging.

The kings who ruled in Polonnaruwa engaged in foreign trade. During the period of king Parakramabahu I, Sri Lanka was self-sufficient in paddy and also had exported to many Southeast Asian countries as well as to India. The people of Polonnaruwa had many of their requirements fulfilled except salt, which they had to bring from the coastal area.

Buddhism continued to be the main religion in Polonnaruwa era. Before the Sinhala kings’ rule, there was a strong influence of Hinduism caused by Cholas. It is evident from the removal of cow shape in Polonnaruwa moonstone and also by the presence of Shiva temples in Polonnaruwa. After Chola rule a lot of vihars were renovated by Vijayabahu I and Parakramabahu I. Various divisions or Nikayas in
Buddhism were united by Parakramabahu I.

The Kingdom of Polonnaruwa was abandoned in the 14th century, and the seat of government for the Sinhalese kings was moved to Yapahuwa. Although many factors contributed to this, the leading cause of the abandonment of Polonnaruwa as the kingdom of Sri Lanka was its susceptibility to invasions from south India.

King Nissanka Malla, also known as Kirti Nissanka and Kalinga Lokesvara was a king of Sri Lanka who ruled the country from 1187 to 1196. He is known for his architectural constructions such as the Nissanka Lata Mandapaya, Hatadage and Rankot Vihara, as well as for the refurbishment of old temples and irrigation tanks.

Nissanka Malla declared that only a Buddhist had the right to rule the country, thereby securing his position and justifying his claim for kingship. He spent large sums for various constructions and refurbishments, and also gave money to the public in an attempt to put down crimes. He maintained cordial relationships with several countries, and also invaded the states of the Pandyan and Chola dynasties in South India.

Several rock inscription made by Nissanka Malla at Dambulla mentions that he is of the Kalinga dynasty and a descendant from the race of Prince Vijaya. Another inscription at Ruwanwelisaya describes him as being a member of a royal family of Kalinga, born at Sinhapura.
Nissanka Malla declared that only a Buddhist had the right to rule the country, thereby securing his position and justifying his claim for kingship. He spent large sums for various constructions and refurbishments, and also gave money to the public in an attempt to put down crimes. He maintained cordial relationships with several countries, and also invaded the states of the Pandyans and Cholas in
South India.

Nissanka Malla came to Sri Lanka under the invitation of Vijayabâhu II, who succeeded Parākramabāhu the Great, and was appointed as Vijayabâhu’s Aepa (sub-king). Vijayabâhu was killed by Mahinda VI of the Kalinga Dynasty. Mahinda VI reigned for only five days before Nissanka Malla killed him and assumed the throne himself in 1187.

The Nissanka Latha Mandapaya, constructed by Nissanka Malla is a unique type of building. It contains 8 granite pillars which were used to support a roof.

With pillars are carved out of granite in the form of lotus stems with opening lotus buds on the tops, and are positioned on a platform. Historians believe that the palace would have been a two storied building with top floor made of out of wood.

He also performed major refurbishment was carried out at the Dambulla cave temple.

Standing close to the shore of the great man-made lake, the ruins of the palace of King Nissankamalla(1187-1196 AD), is less well preserved than those of the Royal Palace, but is pleasantly located. This palace includes a royal bathing pool just south of the palace, and the King’s Council Chamber, where the names of the king’s ministers can be seen carved into the pillars which supported the chamber roof. 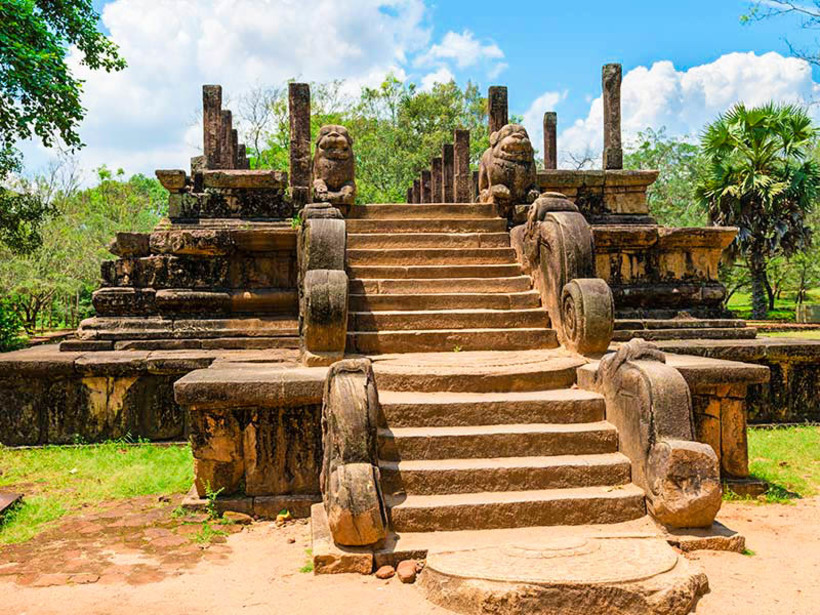 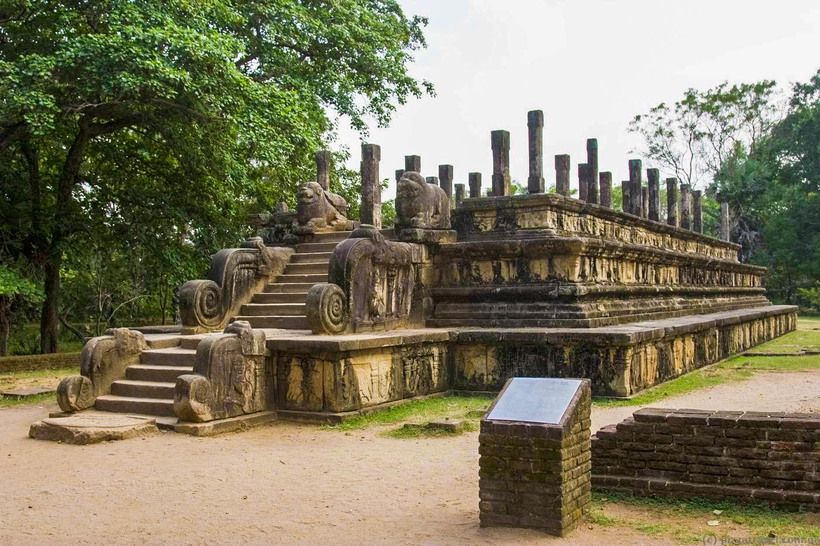 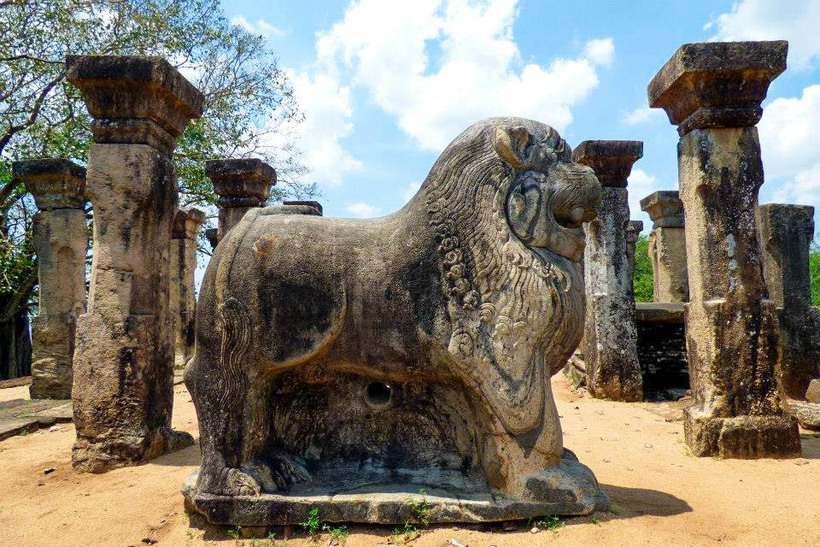 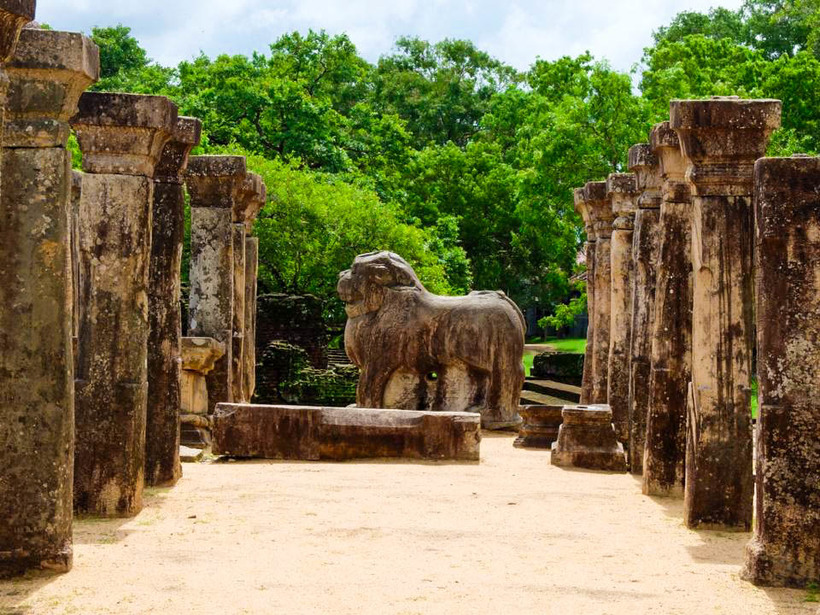 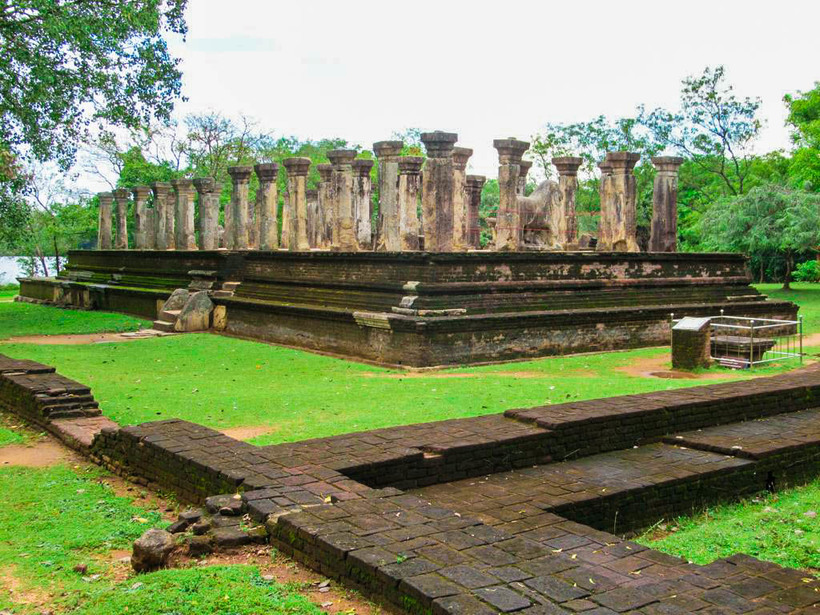 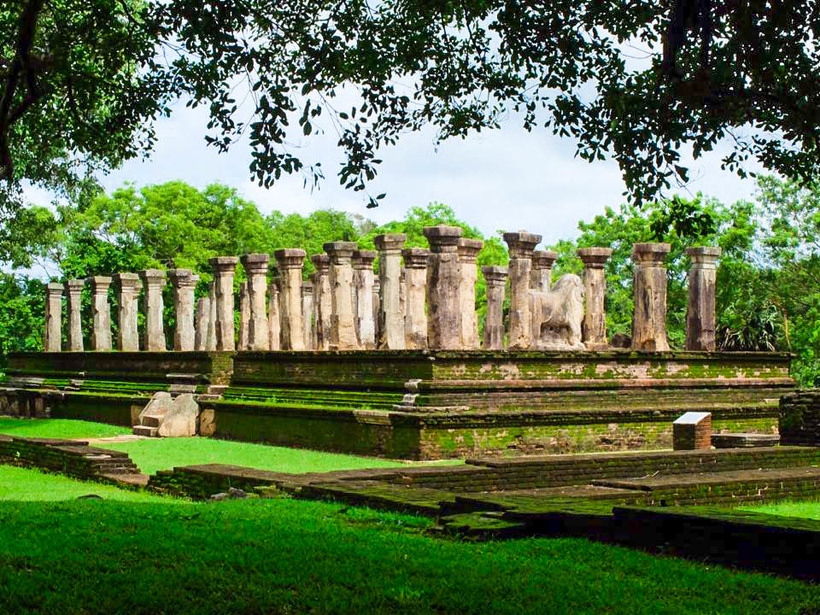