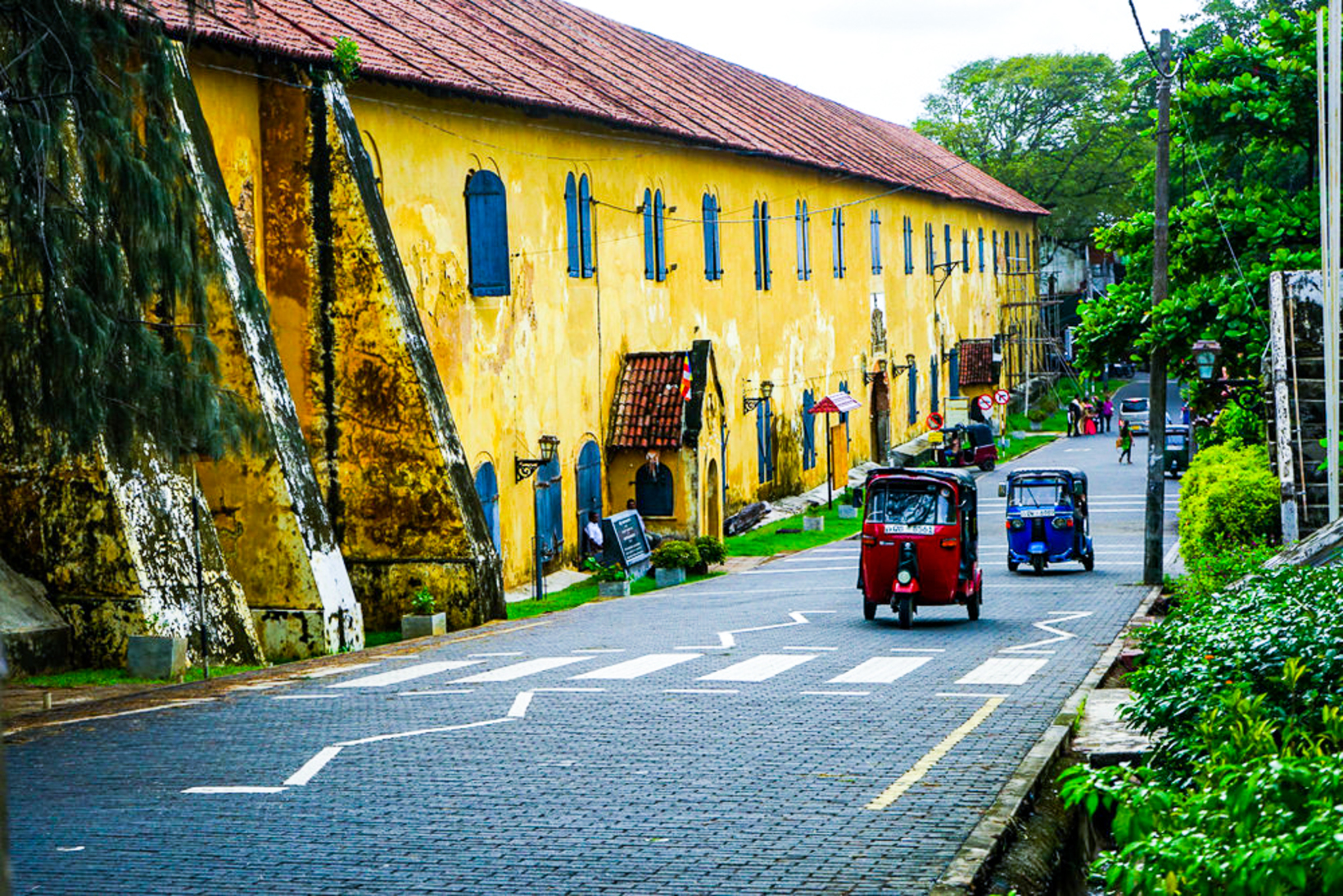 The National Maritime Museum of Galle is a beautiful piece of old Dutch architecture filled chockfull of nautical and marine marvels, dug up from the sea and showcased here. The building has a long and interesting history that is well worth elaborating on.

Over 400 years ago, Sri Lanka fell to foreign invasions. Lands ruled by various royals and nobles were conquered after bitter wars, where rivers of blood ran. Religious and cultural symbols were burned to make way for the those of the invaders, the war-loving Portuguese. They made Galle their base. But their empire barely lasted for a century before they were succeeded by their conquerers, the profit seeking Dutch. These new invaders took over all the most profitable ports of Sri Lanka and used them to further the Dutch East India Company (or VOC as it was known then) that traded goods from all over the world. Sri Lanka, or Ceylon as it was called then, was a key point in their shipping routes, being practically smack-dab in the centre of the world and surrounded by the ocean.

Galle has always been a major harbor, visited by ships and traders from across the globe for several millennia. As such it did not escape the clutches of the Dutch traders who put profit before all else. It served as their main base of operations. Unlike their Portuguese counterparts, the Dutch preferred not to bring areas under control by war and cruelty. They instead built up a very solid stone fort with three protective bastions and high ramparts, and then created a prosperous city within. Their buildings were beautifully made, and their shops had many unique unseen things. Most of all, the locals found that they could trade with them to some extent and make money. This encouraged the people to cooperate with them, though there were many areas that were not under Dutch control.

The fort had its man entrance in the western ramparts. And just beyond the imposing Gatehouse were a long strip of elaborately built Warehouses constructed in 1671. These spacious structures were used to store the goods that traders brought in, along with necessary food, weapons and other goods.

However, in the 18th century, nearly a hundred years after the Dutch took control of Ceylon, the British Empire began a storm of conquering. They defeated the Dutch and took over Ceylon, ruining any hopes that the Ceylonese had of freedom at that time. Under their rule, the entire island was conquered – whether by force or persuasion. Even those stray struggling free groups, who had managed to still stand under the other two invasions, fell under intense combat with highly trained and better equipped troops. Therefore, they were able to choose wherever they liked as their base, unlike the Portuguese and Dutch.

They chose Colombo as their base, and Galle slowly lost its importance. While ships of traders still visited the harbor, they were not as often or as large scale; preferring to do their trade in the harbor of the capital – Colombo. The British also changed the location of the main entrance in the Galle Fort, to suit their own needs. The new main entrance was created in the northern (main) ramparts in 1873. They also made their own warehouses separately. With that, the original entrances and adjoining warehouses became used less and less.

In the mid 20th century, the British Empire gave independence to most of its subordinate countries. Ceylon gained freedom once again, and the foreign invaders all left. Trade slowed down, especially in the towns except Colombo, and Galle became more sedate. The warehouses near the fort’s gate were abandoned. Several decades passed.

On the 09th May 1992, the government took up the initiative to create a National Maritime Museum in the warehouses. The structures, which were barely holding on were renovated to their original state. At the time, the museum mainly focused on exhibits of sealife. There were stuffed specimen, fossils, shells, skeletons and scale models of whales, dolphins, porpoises and fish. The museum also displayed exhibits connected to sea-faring, maritime trade, fishing and relics retrieved from the 20-odd shipwrecks around Galle. Other exhibits included life sized dioramas of Sri Lankan fishing methods; a “walk along the sea floor” exhibit with natural coral beds, seaweed and deep sea fish; and an exhibit of the causes of sea pollution, coastal erosion, and solutions for these problems. It was a much welcomed location of interest in Galle at the time. But things changed in 2004.

On the 26th December 2004, Sri Lanka was heavily hit by a tsunami triggered from an undersea earthquake off the Sumatran coast (Indonesia). Galle was one of the most directly affected areas. The northern entrance gate of the Galle Fort broke down from the weight of the tsunami, releasing a flood of water into the structures within. Water rose to a level of over 2m at the National Maritime Museum, causing all the specimen and exhibits to get damaged. Many exhibits returned to the sea with the waters, and only 20% of the estimated 3600 displays were salvageable.

In 2007, the government together with the Royal Government of Netherlands, renovated the warehouse under the Sri Lanka – Netherlands Cultural Co-operation Program. The renovations were completed in 2010, and the museum officially reopened. The museum, while being on a smaller scale than the previous version of it, has a decent collection of artifacts – the number of which continues to grow.

Things to See at the Museum

The National Maritime Museum is an interesting place to visit which can be reached by both foot and vehicles. There are two entrances that you can easily access it by; the upper level entry linked to the present main gate, and the lower level access which is also now used as a prominent gateway.