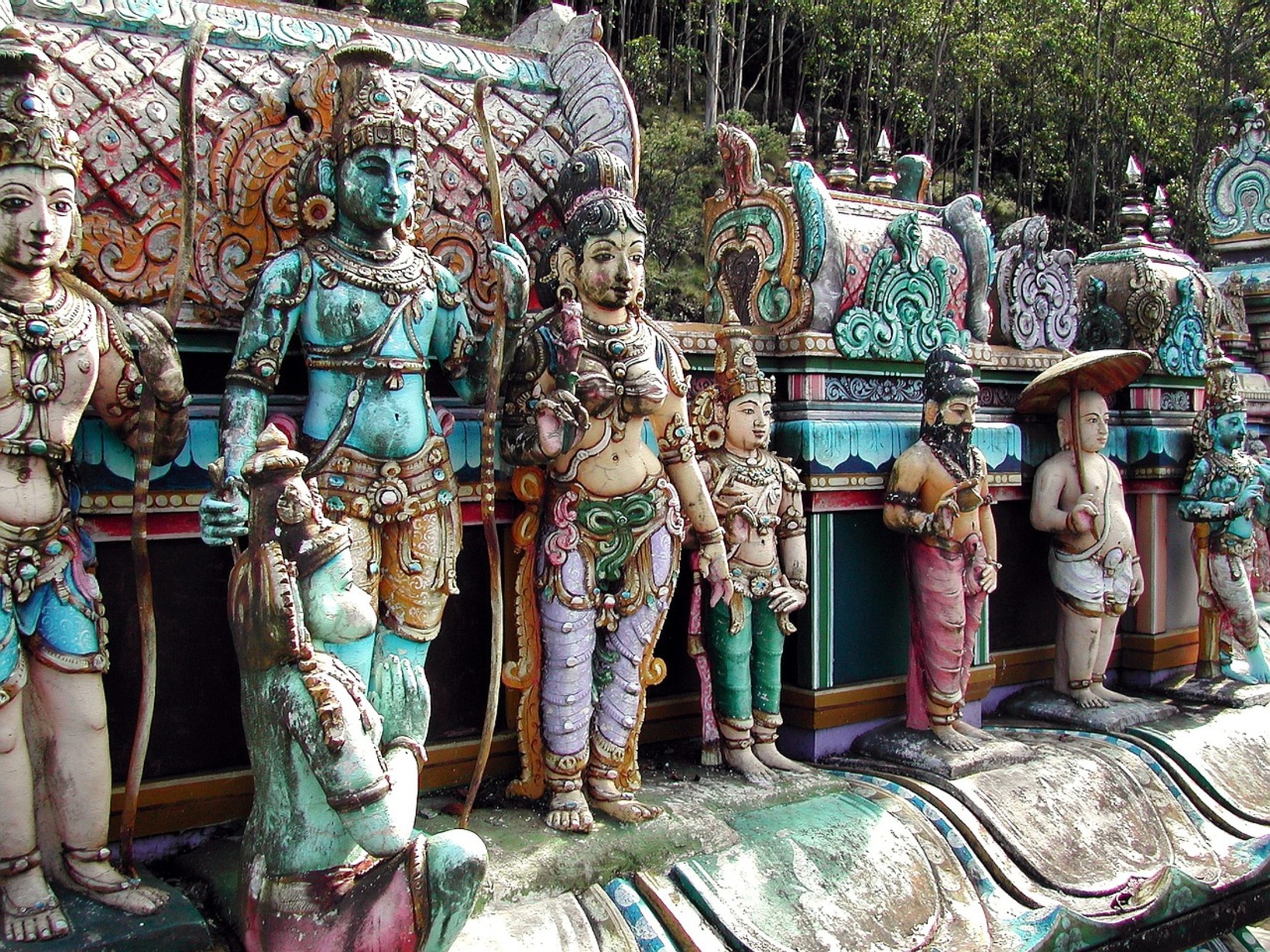 Hinduism has a long tradition in Sri Lanka, and Hindus make up around 13% of the population. Although more concentrated in the North, temples and kovils can be found in all corners of the island. Take a Tour of some the most sacred and beautiful Hindu devotional sites in the Sri Lanka.

Located in a sleepy hamlet in the outskirts of Chilaw, this temple is dedicated to the Lord Ishwara, and is similar to other famous temples such as Koneswaram and Thiruketheeswaram, in that three Sivalingams are enshrined here. The annual festival is celebrated on the 16th of September, and culminates at the water cutting ceremony performed at the Deduru Oya.

Venerated by Saivites from across the continent, this temple is located in Trincomalee in the Eastern Province. The primary deity is the Lord God Shiva in the form of Konesar. Many royals have renovated the complex throughout the years, and it is as much an edifice that records history as well as a religious hub.

Found about seven miles North of Mannar town, this is purported to be the ancient temple where Kethu Bhagavan worshipped Lord Siva, giving it its name. The holy waters present in the Palavi Tank adjacent to it are also venerated through the ages, and although the exact date when the temple was built is unknown, it is a place of great religious significance to Hindus.

Manavari, about 6 kms north of Chilaw, is the first place where Lord Rama installed a Lingam, as a remedy to Lord Shiva after committing Brahmincide by killing the King Ravana who was a Brahmin. This Shiva Lingam in Manavari is called Ramalingam because it was made by Lord Rama. There are only two Lingams in the world named after Lord Rama, the other is in Rameswaram in India.

The historic Kandaswamy Temple in Nallur, not far away from Jaffna's town centre, is dedicated to Lord Murugan in the form of the divine spear Vel, a well-known symbol of Tamil religiousness. Founded in the 10th century this Skanda Temple was enlarged during the 13th to 15th century when Jaffna was a major principality of the island, especially under Chempaha Perumal, who later on became the Sinhalese king Bhuvenaikabahu VI in Kotte.

Shri Mamangeshwarar Kovil in Amarnthakali, or Amirthakally, 6 kms away from Batticaloa, is a well-known holy place for Hindus, who believe that bathing in the sacred water of Mamangeshwarar tank will improve the rebirth conditions for their deceased relatives. Besides the main temple for Kali Amman there are shrines for Lord Shiva and Lord Ganesha. Amarnthakali furthermore is believed to be the site where Lord Rama and his consort Sita and his brother Lakshmana partook their first meal after the war. The so-called Old or Hanuman Lake is said to have extinguished the fire set on Lord Hanuman's tail.

Temple of the Tooth and Devales, Kandy

Kandy's Tooth Relic Temple is the most significant Buddhist holy place in Sri Lanka, venerated by Buddhists from Southeast Asia as well. There are four shrines for Gods connected to the Buddha's Tooth Temple. These Devales, which play an important role in the processions of the Buddha's Tooth Temple, are mainly Sinhalese places of worship, whereas Tamil Hindu temples are called Kovils. But the Devales are closely connected to Hinduism in many ways. The above mentioned world-famous procession called Kandy Perahara, originates in the Ratha Yatras held for the Hindu deities. And the priests of the Kataragama Devale in the city centre are not Sinhalese Kapuralas, but Tamil Brahmins.

The Sita Amman Temple, located halfway between the highland village Sita Eliya and the Hakgala Botanical Gardens, has become the most venerated of all Ramayana Trail sites in Sri Lanka, because it is believed to be the place where Sita lived most of the time of her captivity on the island of Lanka. After she refused to stay in Ravana's magnificent palace she was transferred to Ashok Vatika or Ashokavanam where she lived under Ashoka trees.

Kataragama is the name of the God and his hometown as well. Kataragama is the Sinhalese form of Skanda, also known as Subhramaniya. He usually is called Murugan or Karthikeya by Tamils. His local consort Valli and his Indian consort Teyvanai (Devasena) and his brother Ganesha are worshipped in their respective own shrines in the holy city of Kataragama, too. Sinhalese worship Skanda-Kataragama as one of their four or five national Gods, especially as protector of the island's south.