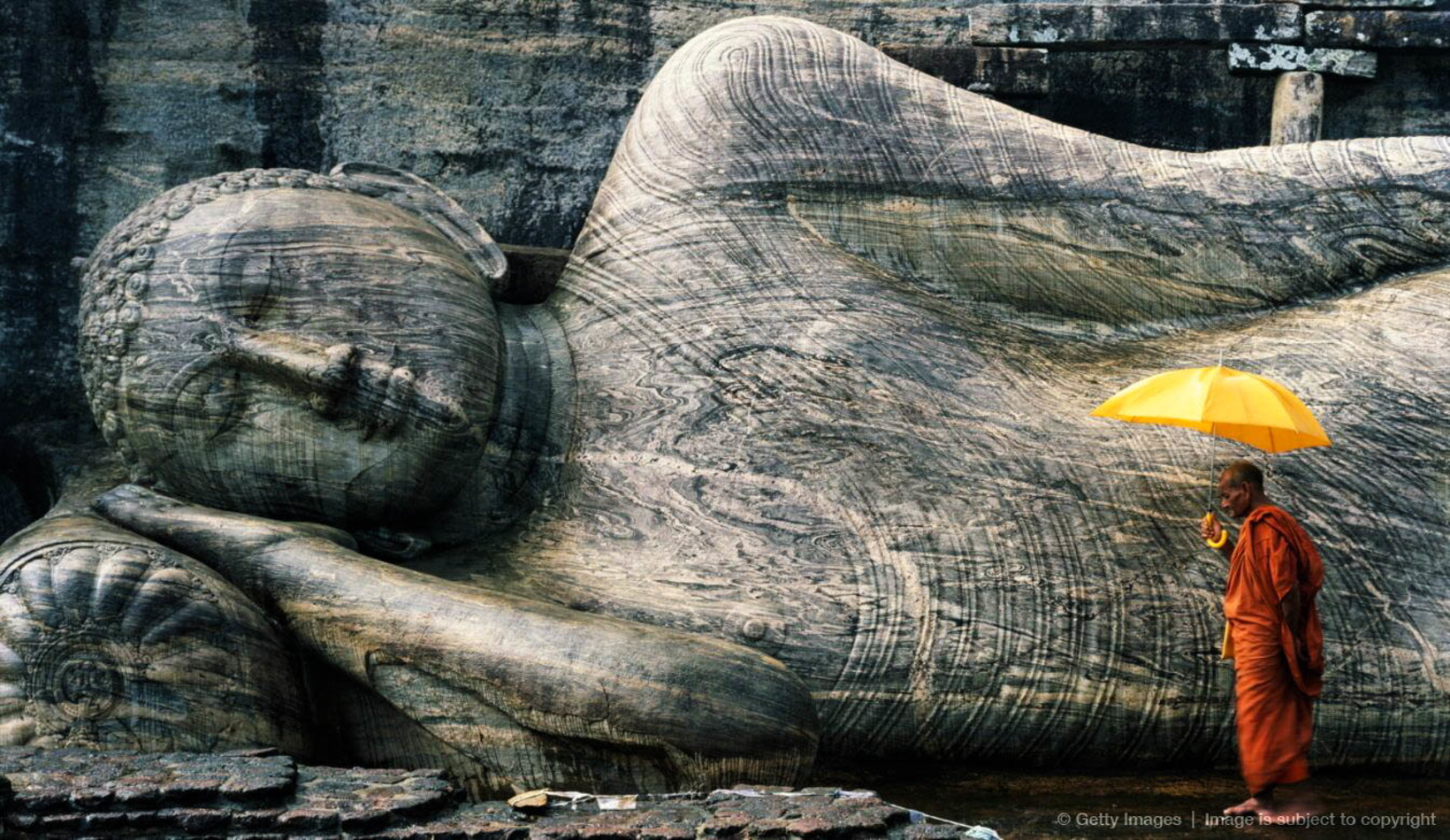 Gal Vihara (Sinhala: stone temple), Buddhist Temple at (UNESCO World Heritage Site) at Polonnaruwa, Sri Lanka is the most perfect specimen of Buddha statue hewn out of solid stone. Crafted during the reign of King Parakrabahu (1153-1186 A.C), Gal Vihara statues are still incomplete preservation with their irresistible charm and sublimity. It is undeniable that the sculptors of Gal Vihara were of greater skill and expertise in the art of stone sculpture in Sri Lanka. The images at Gal Vihara have brought about a higher level of awakening in the observers with respect to Buddhist art in Sri Lanka.

Gal Vihara at Polonnaruwa in Sri Lanka known as “The Northern Temple” at the beginning of its history, is a cave complex, about 27 meters in length and 10 meters in height at the center and sloping towards the ends, with sculptures carved on the solid rock in four shrines.

Gal Vihara, like numerous other Buddhist shrines of Sri Lanka, is a shrine of Theravada Buddhism. Then again Gal Vihara testifies to the influence of Mahayana Buddhism during the 12th century.

Gal Vihara consists of four cave shrines with sculptures hallowed out of granite rock.Caves from left to right are

(a) Cave of Vijjadharas,
(b) Excavated Cave,
(c) Cave of Standing Image and
(d) Cave of Reclining Image.

Though the brick walls of the four shrines had collapsed centuries ago, the foundations remain giving evidence that each statue was separated from one another.

The cave consists of a main image of Buddha sculpted out of the rock boulder, having carved round and four small bas relief carvings of Buddha. The small bas relief statues are carved on either side, above the head of the main image.
The main image depicts the chief of meditative Buddhas titled Dharmadhatu, Adi Buddha, Vairocana, and Vajrasattva.
The four small images of the Buddha in Dhayani Mudra represent the four directions of the universe.
All five images are of Dhyana Mudra or meditative posture is believed to depict the all-embracing Body of Law (Dharmakaya).

The Excavated cave too houses an image of Buddha in dhayana mudra or meditative attitude sculpted out of the rock boulder. The image herein is smaller than the main image at Vijjadhara Cave.

The Cave of Standing Image

The Buddha statue rising to 7 meters in height herein, stands on a lotus pedestal called Padmasana. Padmasana signifies that Buddha is a transcendental being.

The Cave of Standing image: Ananda or Buddha

The standing statue is at the head of the massive reclining Buddha. The standing statue’s placing of arms across the breast has caused a controversy as to the identity of the statue. The early archeologists believed the statue was that of Ananda, an attendant disciple of Buddha grieving at the passing away of Buddha.

However, the subsequent studies at Gal Vihara on the features of the statue have established that the standing image is that of Buddha and not of his disciple Ananda.

Firstly, since the standing image was once contained in its own shrine room, separated by brick walls it has no relevance to the reclining image. Though the brick walls of the three caves had collapsed several centuries ago, the foundations can still be seen.

Thirdly, the Buddhist artists never offered the Lotus throne or Padmasana to disciples Fourthly, the ears of the statue herein are elongated. Of all the statues of Buddha, his disciples, and deities, only the images of Buddhas consist of elongated ears.

The Cave of Reclining Image

The reclining image of Buddha at this cave is 14 meters long. In spite of the colossal proportions, the statue carries supreme grace and serenity.

The Cave of Reclining Image: Reclining posture Vs. Parinirvana posture

The argument over the massive statue with respect to Buddha’s posture of passing away and the posture of reclining was won over by the proponents who established that the great statue at this cave is a reclining image. Firstly herein the Buddha statue with a lotus symbol in the palms and feet is sculpted in the posture called Simhaseyya: the pose of a sleeping lion. The lion sleeps resting its head on its right paw.

Secondly, in Sri Lanka, the theme of passing away wasn’t taken as a popular feature in Buddhist art. Thirdly the images that regularly accompany the images of Buddha’s passing away, i.e.images of disciples, sal trees, and flowers aren’t present at this statue.

(SKU: LK60211500) The Polonnaruwa Ancient Kingdom and Wild Elephant Safari from Sigiriya (Private Day Tour) This tour takes you to Polonnaruwa and Minneriya, on a...
Book now

(SKU: LK60061500) The Polonnaruwa Ancient Kingdom and Wild Elephant Safari from Dambulla (Private Day Tour) This tour takes you to Polonnaruwa and Minneriya, on a r...
Book now