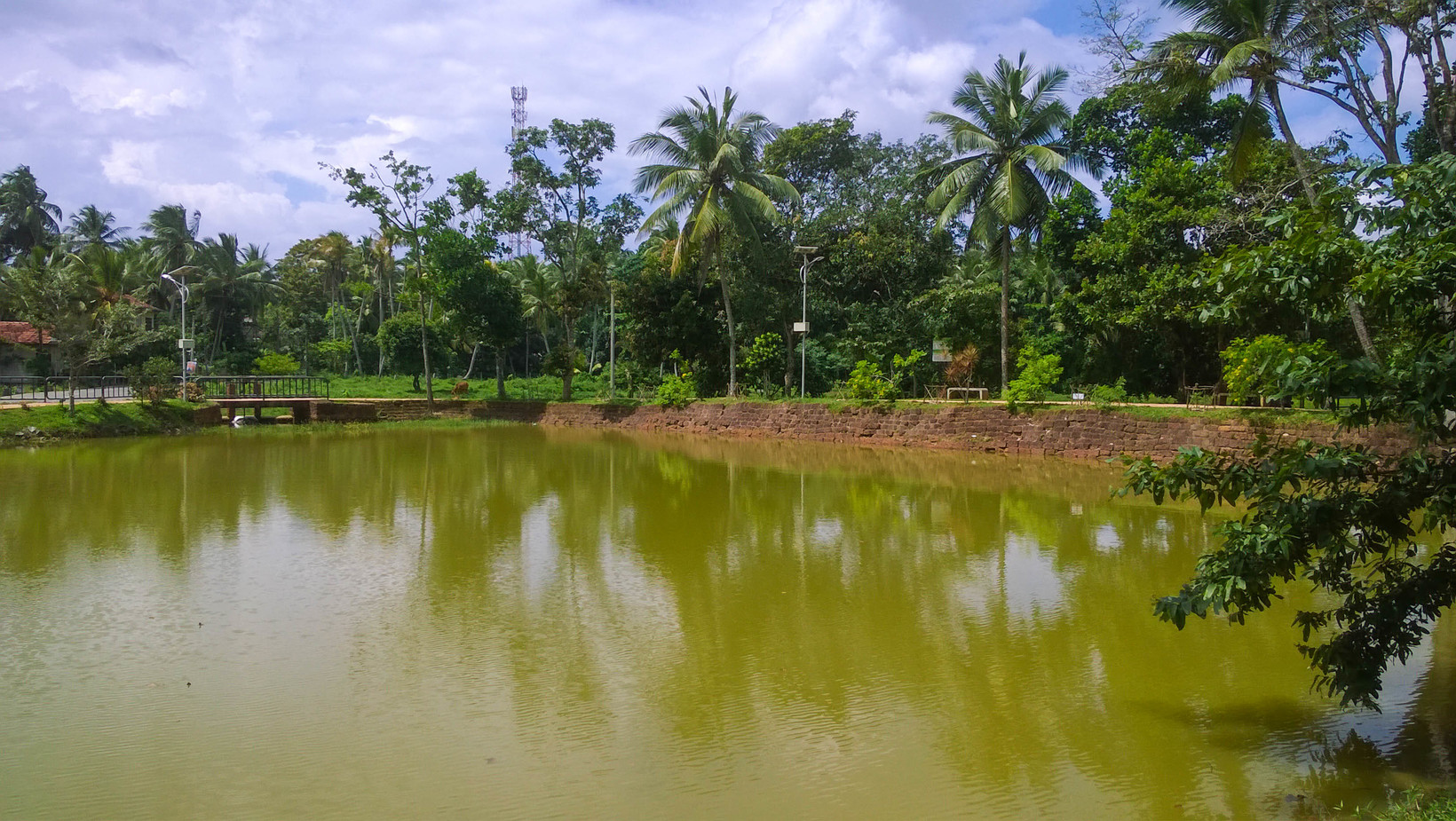 Udugampola is a small town in Gampaha. It was a a subdivision of the Kotte Kingdom in the 15th century AD, and was ruled by the viceroy Sakalakala Wallabha; As such there are some interesting historical attractions in this town; mainly the Palace Mound, Pathaha Pond and the Uththararama Purana Temple. The Gampaha Botanical Gardens are also located in this vicinity.

According to the ancient Sri Lankan royal chronicle, Rajaveliya, Udugampola was ruled by the provincial king or viceroy Sakalakala Wallabha, who was one of the three sons of King Veera Parakramabahu VIII of Kotte. His eldest brother King Parakramabahu IX ruled Kotte, while the third son King Thaniya Wallabha took over the Madampe area. King Sakakala Wallabha’s palace in Udugampola is believed to have been located at what is today known as Maliga Godella (Palace Mound). The existence of this palace in Udugampola has been confirmed due to an old engraved copper plate, named Kadirana Sannasa, which was discovered in Kadirana cinnamon plantation near Negombo town. While bearing no date, the Sannasa describes a grant made by King Vijayabahu of Udugampola. It states that a donation was made to a Brahmin by the king, at a royal assembly held in his new palace at Udugampola, on Poson Day (18 June 1517) when a full solar eclipse was sighted.

Pathaha Pokuna (pond) is an old bathing tank or pool located approximately half a kilometer from the Udugampola Roundabout, close to the Uththararama Purana Temple. As of 8 July 2005 the pond was formally recognised by the Government as an Archaeological Protected monument of Sri Lanka. It was identified as the bathing pool of the former king, and this pond has a story to tell.

King Sakalakala Wallabha was a brilliant warrior in the Kotta era. As a result, his kingdom flourished, and taking over his throne and rule was much longed for dream his sons. Due to that, two of his seven sons, the princes Kalu Kumara Bandara and Veeramunda conspired to murder their father and take his throne. They knew that the king would bathe here at the pond without fail, and since nobody else was allowed there was no chance of their evil plan being discovered. They planted pointed wooden stakes with metal tips in the pond so that they were hidden in the water, right at the spot where the king usually jumped into the pond using a flat stone.

However, on that fatal day moments before jumping onto the points to his death, the king observed that small flying insects were able to land on the water surface without sinking. Upon further scrutiny, the king found that the insects were landing on the pointed ends of hidden stakes. Understanding the betrayal of his sons, the king ordered that the two of them were to be executed. Though Veeramunda was captured and executed; Kalu Kumara Bandara escaped to the region of Sri Pada Mountain. Not wishing to suffer the shame of execution and unable to shake off the soldiers sent to capture him; he later committed suicide by jumping off a cliff. It is a belief of the natives that he never attained peace and became an evil spirit named Kalu Kumaraya that haunts the region to this day.

Pathaha Pokuna as it is today is said to be one of the largest ancient bathing ponds found in Asia. This L-shaped pond has an area of 25,805 square feet. The walls of the pond are made of laterite rock with little protrusions jutting outwards from the bottom to the top. The laterite blocks used in the construction of the pond vary in size, but they are fitted together perfectly with no concrete or anything of that sort. While the south and the east banks of the pond are made of laterite blocks in a normal manner, no evidence for the use of extended 122m long portions of the northern bank has been found.

Uththararama Purana Temple (also known as Maligagodella Temple) is located at the Udugampola – Weediyawatta Junction not far from Pathaha Pokuna. This temple received its archaeological site designation on 7 July 2005.

This temple region appears to have been a special place for the old Udugampola kingdom as several ruins related to this time were found here. It is believed that the temple was later built on the palace mount, on the exact place the palace stood. The ruins here include the protective moat and the bathing pond. In addition, there are other regions nearby with royal connotations; such as ‘Kehelbaddara’ where the royal flag bearer lived, Veediyawatta being the promenade where the annual royal parade of King Sakalakala Wallabha took place, Dolaagatha being the place where a small stream-fed into the royal water garden, ‘Devalapola’, and Maabodala where the highest granaries of the king’s treasury stood. Interestingly enough, these names are still used to this day.

In close proximity to Udugampola lie the Henarathgoda Botanical Garden botanical gardens of Gampaha. It was established by the British in 1876; the sole purpose of it being to conduct experiments on tropical economy plants such as Rubber and etc. The first rubber tree imported to Sri Lanka was planted in this garden, and it was the very first seedling of a Brazilian rubber tree ever planted in Asia.

As it is today the garden is composed of a large variety of plants and many of which are from every corner of the tropical world. Sprawling over an area of over 43 acres, the Gampaha gardens are situated next to the river, Attanagalu Oya, and surrounded by paddy fields and a secondary forest. It is separated into lots of interesting sections with eye-catching landscaping and hosts an extensive collection of palms, orchids and trees endemic to the country. The garden is also home to approximately 80 species of birds, including ten endemic species; 18 species of mammals, including the Sri Lankan flying squirrel; 12 species of butterflies; and 10 species of dragonflies. With the recent addition of boat rides on Attanagalu Oya, the place has become more popular amongst the younger generations.