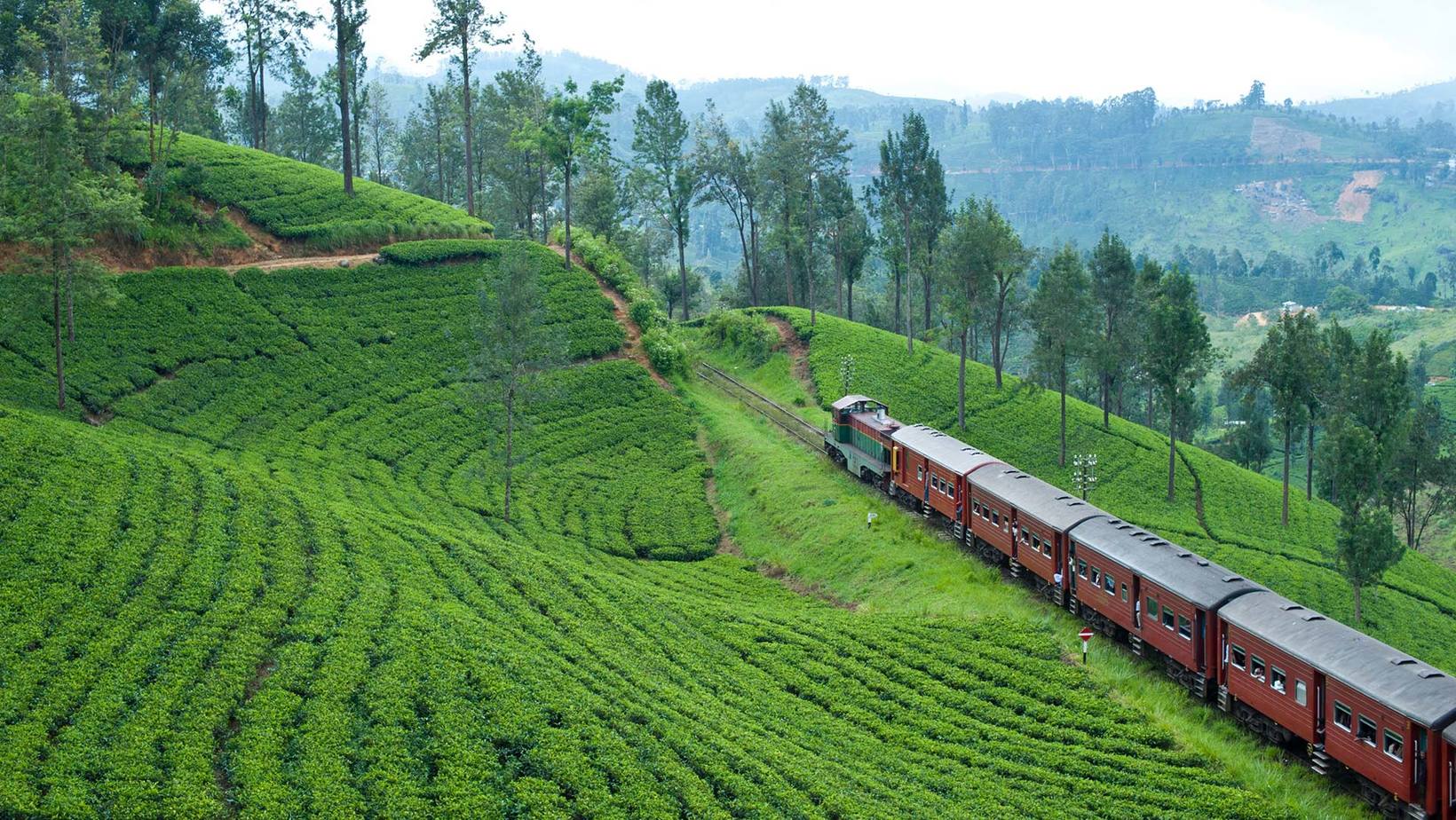 Sri Lanka train tours or train travel, while slower is more comfortable. The trains are the most cheapest, safe and enjoyable traveling method in Sri Lanka. From the Colombo Fort which is the central railway station travelers can take their trains to different destinations. You can take trains to most of the important places in the Sri Lanka.

History of the Sri Lanka Railway: Sri Lanka Railways, or Ceylon Government Railway, was conceived in the 1850’s as an instrument to develop and unify the country. The 1st sod of the Sri Lanka Railways was cut by Sir Henry Ward, the Governor, in August in1858. The Railway Network was introduced by the British in 1864 and 1st train ran on 27th December 1864, with the construction of the Main Line from Colombo to Ambepussa, 54 kilometers to the east. This line was officially opened for traffic on 02nd October 1865. The Railway extended and developed it’s network and in 1927, a total route length of 1530 km was in operation. The Main Line was extended in stages, with service to Kandy in 1867, to Nawalapitiya in 1874, to Nanu-Oya in 1885, to Bandarawela in 1894, and to Badulla in 1924. Other lines were completed in due course to link the other parts of the country, the Matale Line in 1880, the Coast Line in 1895, the Northern Line in 1905, the Mannar Line in 1914, the Kelani Valley Line in 1919, the Puttalam Line in 1926, and the Batticaloa and Trincomalee Lines in 1928.

The Railway was initially built to transport coffee and tea from the hill country to Colombo for export and was for many years, the main source of income. With population growth, however, passenger traffic increased and in the 1960’s overtook freight as the main source of business. The Railway is now primarily engaged in the transport of passengers, especially commuters to and from Colombo, offering a vital service and reducing road congestion.

» 1st class air-conditioned seats car: Only available on one or two trains.

» 2nd class seats: Available on all trains. These come in several versions, depending on the train:
(1) Unreserved seats, where you buy a ticket, hop on and sit in any available seat,
(2) Reserved seats where you must make a reservation and you get an allocated seat,
(3) Reserved ‘sleeperette’ reclining seats which are available on most overnight trains. 2nd class seats are the recommended option on trains with no 1st class.

» 3rd class seats: Available on most of the trains. These come in several versions, depending on the train: unreserved seats, reserved seats, and reserved ‘sleeperette’ reclining seats. 3rd class is very basic and gets very crowded, and it is not generally recommended for visitors.

The railway network, which began operating in 1864, comprises nine lines radiating from Colombo, the most beautiful of which runs deep into the hills, traveling via Kandy and Nuwara Eliya before terminating in Badulla. This journey offers spectacular hill-country views as the train winds its way past gushing waterfalls and through neatly-clipped tea estates.

The Matale Line branches off the Main Line at Peradeniya Junction, near the world-famous Peradeniya Botanical Gardens. It connects to Kandy, home of the Sri Dalada Maligawa, which houses the Sacred Tooth Relic of the Lord Buddha, before descending to Matale.

3. Train Tour Routes in Sri Lanka – Coast Line– Colombo Secretariat halt to Matara via Galle – extension of the track up to Hambantota and Kataragama is currently under construction.

The Coast Line (Southern Line) runs south from Colombo, following the edge of the Indian Ocean. It offers passengers views of tropical beaches and coconut palms.

Polgahawela to Kankesanturei deviates from the Main Line at Polgahawela junction – presently operating only up to Omanthai, track was abandoned beyond Vavuniya due to war but extended service up to Omanthei on May 2011 after the end of civil war. Reconstruction began in March 2009 to re-extend track up to Kankesanthurai.

5. Train Tour Routes in Sri Lanka – Batticaloa Line- separates from the Northern Line at Maho junction and extends up to Batticaloa via Polonnaruwa

The Batticaloa Line branches eastward from the Northern Line at Maho, to Polonnaruwa, site of an ancient capital in the 11th century and home to many historic monuments. The line continues to the eastern city of Batticaloa.

6. Train Tour Routes in Sri Lanka – Tricomalee Line- separates from the Batticaloaline at Gal-oya junction in the to Trincomalee.

9. Train Tour Routes in Sri Lanka – Kelani Valley Line (originally narrow gauge) – Colombo to Yatiyantota – presently operating only up to Avissawella, the track beyond Avissawella was abandoned in 1940. Broad gauged up to Avissawella in 1997