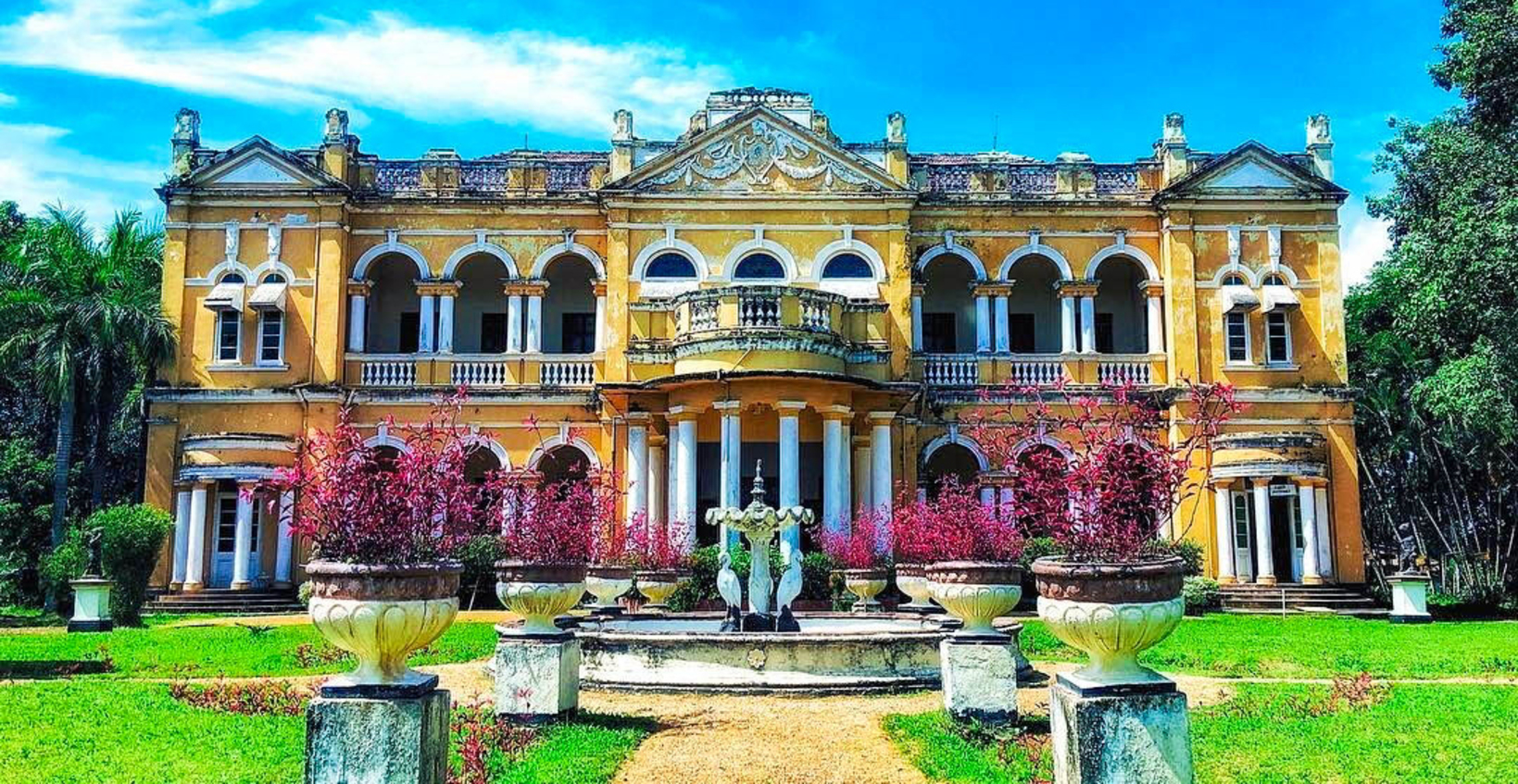 In the countryside of Kalutara, Sri Lanka is Richmond Castle, an old Edwardian mansion. Built in the early 1900s, it was the home of the local baron Don Arthur de Silva Wijesinghe Siriwardena. Located on a hill 2 km from the Kalutara town,  the 42 acre estate is currently open to the public.

Shortly after, Baron Arthur Siriwardena returned to Sri Lanka to take up his position. On the way he visited India, where he was inspired by the palace of his old school pal, Raja Rajeswara Sethupathi, the Maharaja of Ramnad.

As the story goes, he asked for the construction plans of the palace from Sethupathi in order to build a house in the same image. But the maharaja refused on the grounds that a Ceylonese did not have the skills to undertake such a major project. On hearing this, the baron went back to Ceylon where he hired the services of two good local architects. He then visited his friend again, this time bringing along the architects with him. They viewed the castle and copied its plan in secret. The Baron then had Richmond Castle built as a symbol of Sri Lanka’s splendor and power. Every inch of the structure boasted the highest luxury of the era. All essential supplies for the building; such as floor and roofing tiles, timber, stained glass, decorative items, and bathroom fittings; were outsourced from various countries abroad. It was a sight never before seen in Sri Lanka.

The Baron moved into Richmond Castle in 1910 upon his marriage to a young noble beauty, Clarice Matilda Maude Suriyabandara. Richmond Castle had beautiful flower gardens and fruit orchards, and was often host to lavish banquets for  foreign and Sri Lankan dignitaries. It is said that Siriwardena also had a troupe of over 50 performers for the entertainment of his guests, a grand white horse driven carriage, and employed a small private army for protection.

However, despite the fairytale life blessed with every comfort in life, the noble couple lacked one of the greatest delights, a child of their own. It is said that marble statues of infants all around the park were made so that the couple could gaze at them lovingly from atop the balcony. Sadly, the marriage did not last, and the baron was overcome with grief. He bequeathed all his wealth to a trust for the public and then lived as a hermit in a hotel in Kandy. He never returned to Richmond Castle for the remainder of his life. Baron Siriwardena died in 1947 at the age of 59, but made provisions for his ex-wife’s care till the time of her death.

The estate was taken care of by his trust, and was later opened to the public.

Richmond Castle is created with a smooth blending of European and South East Asian architectural styles designed by master architects. It encapsulates four distinct styles of architecture. The local central courtyard tradition, the Indian Royal architecture, Roman-Dutch architecture (believed to have been derived from the Baron’s Roman Catholic roots), as well a slight touch Greek design.

The mansions has two floors with 99 doors and 34 windows. The Venetian stained glass window panes are exquisitely designed depicting elegant grape vines. Records indicate that all the wooden balustrades and other wooden structures amounted to two shiploads of imported Burmese teak. The banquet hall, which at times doubled as a performance arena was designed with a ventilation system that directed the cool air flowing over the nearby Kalu River through ingenious underground passages that runs right through the foundation of the mansion. This naturally air conditioning kept the hall and its guests cool in the heat of the burning tropical climes of Ceylon. The hall also showcases 12 great Rangoon Teak pillars with intricate wooden carvings resembling those in the Embekke Temple in Kandy. They  support six massive decorated arches that serve as roof beams.

The wide staircase in the lobby is a typical rich English mansion affair, set upon checkered marble floors, with intermingling western and local patterns embedded in it. The bedrooms on the upper floor are soundproofed using some wonderful techniques that are now visible due to the aged lime covered walls peeling off like crisp paper. The lime maintained a comfortable temperature within the mansion interior throughout the year.

Richmond Castle is now a historic site reminiscing the grand old times long gone. The Public Trustee Department runs an orphanage within the premises while also leaving portions of it open to the public. The large servants quarters which were previously in ruins are now renovated and painted for the use of young orphans, while some of the mansion’s rooms are designated study areas for them.

The master bedroom has undergone a massive change into becoming an exhibition room for old photographs dating from over a century ago. Included are photos of the grand wedding celebrations, the parties and banquets, the Mudaliyar’s gallant achievements and photos of his close relatives and preeminent acquaintances. Some of these photos were taken by the very first studio in Sri Lanka; Plate and Co.

Once a location of enormous pride and cheer; Richmond Castle remains a historical monument that commemorates a resplendent past.

(SKU: LK60160400) Coastal Ride to Galle from Kalutara (Private Day Tour) The Coastal Ride in the South of Sri Lanka takes you to the most memorable places you'...
Book now

(SKU: LK60160500) Bentota City Tour from Kalutara (Private Day Tour) The first place you will visit is the strange and yet beautiful Lunuganga estate that was...
Book now

SKU: LK60160100 Pinnawala Elephant Orphanage from Kalutara During this full day tour to Pinnawala, this tour allows you to have some one-on-one fun with the el...
Book now
【LK94000717: Richmond Castle. Text by Lakpura™. Images by Google, copyright(s) reserved by original authors.】