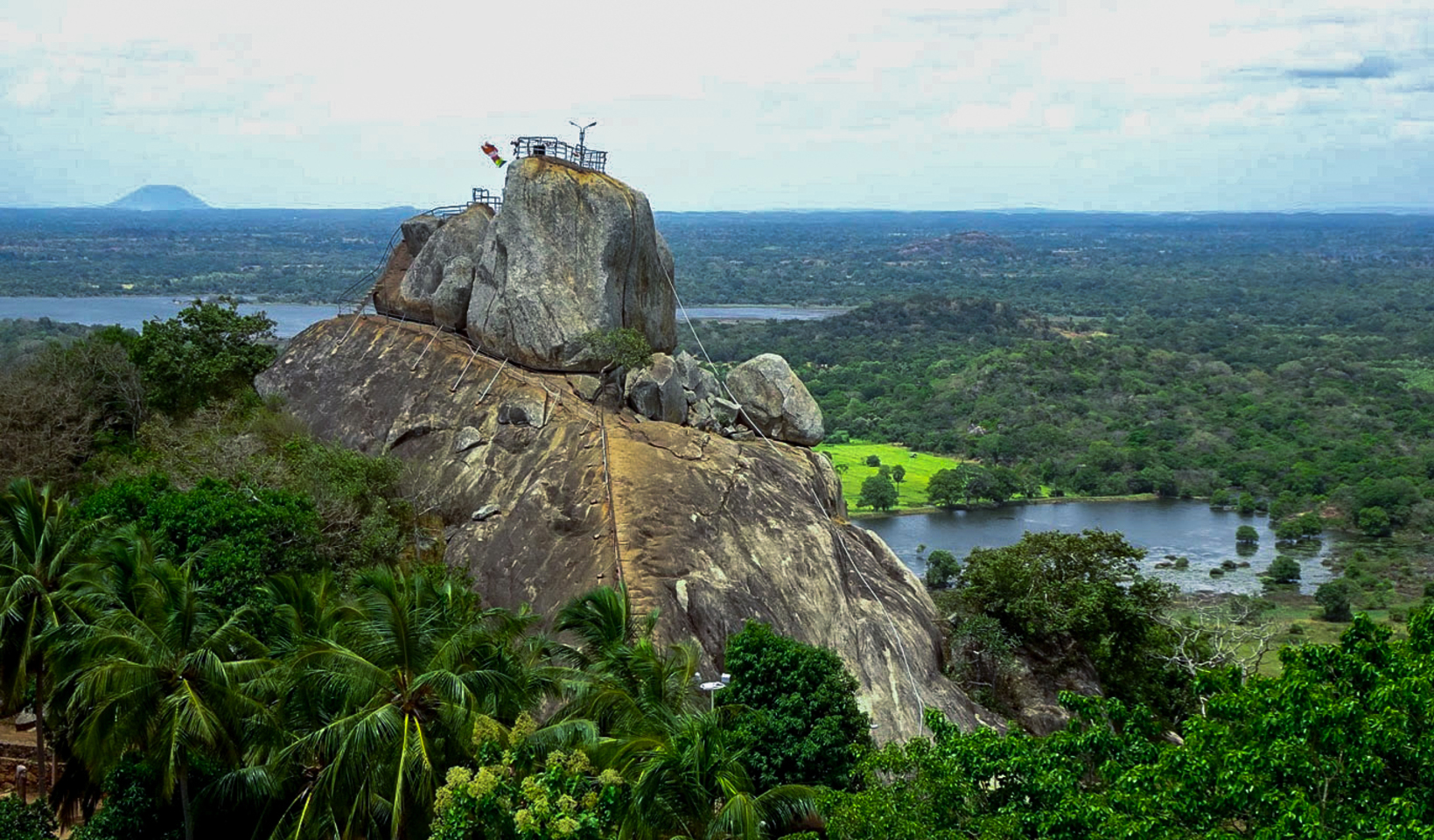 Mihintale is located 221 km from Colombo in the Cultural Triangle of the north-central province of Sri Lanka.

Mihintale Mountain, with the arrival of Buddhism in Sri Lanka, began to serve as a residential area for the venerable monks headed by Arahath Mahinda Mahathera. But soon, with the royal patronage, the sanctuary housed a multitude of with monastic buildings-stupas, uposathgharas, bodhigharas- to serve the monks. Sixty eight cave dwellings provided the monks shade and shelter. Mihintale, the sanctuary for many thousands of laymen as well as holy men, had all the facilities and amenities for basic living.

Vedahala – the Hospital at the foot of the mountain at Mihintale

With the growth of the community of monks and the pious laymen, there arose the inevitable need of a hospital. The first hospital at Mihintale was founded by King Sena the second (853-887 AC) at Mihintale. The identification was based on a tenth century inscription found at the site.

Today, the ruins of a hospital with its layout restored can be seen at the entrance to the site of Mihintale. At the entrance to the hospital is the outer courtyard that consists of four rooms: consulting room; room for preparation and storage of medicine; room for hot water baths. At the end of the outer courtyard, to the north is the main building: the quadrangular courtyard having a small shrine in the center.The rooms are arranged on a two high platforms on all four sides of the Central Courtyard. The rooms face the shrine which is in the Courtyard. The area of each room is about 100 square feet. The rooms open onto an inner Verandha making all cells accessible.

Archeological excavations have unearthed clay wares and blue colored jars. These jars are another evidence of the cultural and trade connections with Iran and Sri Lanka at such an ancient time.

Arama: the residence of the monks at the foot of the mountain at Mihintale

Between the ancient hospital and the great stairway to the mountain of Mihintale are ruins of ancient monastic buildings girt by a boundary wall. The entrance to the monastery is decorated with steps, Guard-Stones, makara (dragon) balustrades and naga (cobra) figures. This building is similar to arama buildings found in Anuradhapura. Ruins of quadrangle’s two story buildings, each built on 12 or 16 stone columns called Prasada that houses several rooms are found here.

The great stairway at Mihintale

The great stairway that leads up the Mihintale Mountain consists of no less than 1840 rock cut steps. While some of the neat steps are carved into the natural rock, the rest are paved with cut granite. Exceedingly wide for a pedestrian climb, the impressive staircase of unique distinction, well sheltered and shaded with frangipani flower trees and ever-green wood makes a very pleasant climb. The blossoms of Araliya (frangipani) make the staircase fragrant while the intrusive hoards of monkeys hover around and hang in the branches of the trees to grab snacks off the visitors.

When one proceeds along the ancient stairway-about half the distance, the path branches off to the right into a still steeper climb. The pathway, which consists of about 80 steps, leads you to the site of the Kantaka Cetiya. The branch pathway is 10 feet wide and about half the size of the stone steps laid on the main path. Mahasaya, Atvehera and Rajagirilena Kanda are approached through similar pathways.

Refectory, the Alms Hall at Mihintale

To the left of the first level of Mihintale is the main refectory. Two stone cut troughs used for serving rice are lined up along the walls to the north and east. The larger of the trough with a length of 23 feet is an indication of the large number of monks. Interior of these troughs were believed to be lined with a layer of metal. Refectory also consists of overhead water pipes and elaborates drainage system. A rock cut inscription reveals the members at the refectory: 12 cooks, warden and firewood suppliers.

Dage, the Relic House, the Main Shrine at Mihintale

Mihintale’s main shrine is located at an elevated level adjoining the refectory. A flight of stairs leads to the main shrine. Two large slabs of stone contain inscriptions in length on both sides of the entrance to the shrine. The beautiful inscription on polished slabs of granite made by King Mahinda the fourth (956-972 A.D.), one of the longest ancient inscriptions of Sri Lanka shed a great deal of information on the monastery.

Kantaka Chetiya in its ruined state, is of a height of 40 feet and a circumference of 425 feet. On the four sides of the stupa are found four projecting front pieces called Vahalkadas. Two of the four Vahalkadas are preserved in good condition. The Vahalkadas are profusely ornamented with sculptures: frieze of ganas (dwarfs) and frieze of hamsa (geese). The caves located near to the stupa are the earliest dwellings of the resident monks at Mihintale.

The sixty eight caves at Mihintale

The sixty eight caves, the earliest dwellings of the monks at Mihintale are located around the Kantaka Cetiya. The Mahavamsa, the great historical chronicle of Sri Lanka narrates on the donation of caves to the monks by King Devanampiya Tissa. Furthermore the inscriptions engraved above the drip ledges of these caves too elaborate of the offering.

To the south of the Assembly Hall in the middle terrace at a lower level is the Lion pond amidst the ruins of a monastic building. The pond built into a natural rock has water channeled from Naga Pokuna at a higher elevation. The water is discharged through the open mouth of the life size-lion carved onto a rock wall. Right round the pond are sculptures depicting dancers, Elephants, musicians and dwarfs.

The first monument that comes into view when entering the upper terrace is Ambastala dagoba built by King Mahadatika Mahanaga (09-21 AC). It is a small stupa surrounded by stone pillars forming a circle. The pillars are the unmistakable evidence that Ambastala dagoba was a circular relic house with a roof of wooden construction over the stupa supported on those pillars.

The site of Ambasthala Dagaba is believed to be the precise location at Mihintale where Mahathera Mahinda met King Devanampiya Tissa and the great sage delivered his first sermon on the mount, Cula Hatthipadopama Sutta.

Sila Cetiya at the upper terrace is believed to have been built on a spot Buddha had seated on his third visit to Sri Lanka. It is a stupa built in the medieval era of Sri Lanka.

Mihindu Seya was built by King Uttiya (210-200 BC) to enshrine a portion of the bodily relics of Mahinda Mahathera.

Aradhana Gala (The Rock of Invitation) at Mihintale

On the eastern side of the Ambasthala Cetiya is the rock called Aradhana Gala. It is believed to be the location where the novice monk Sumana invited the gods and deities to the first sermon of Mahinda Mahathera in Lanka.

Returning from Mihindu Guhawa Cave to the maluwa (plateau), the Mahasaya can be seen on the summit of the mountain to the south. 110 steps cut into the rock leads to the Mahasaya the great stupa. The largest stupa on the summit of the mountain, Mahasaya stupa is the monument all would invariably witness from far distant while arriving at Mihintale. Mahathupa is 45 feet in height 136 feet in diameter. The location of monument must have made the construction entailing as much expense and effort as one of the large monuments at the capital.

Just below the Mahasaya and Mihindu Saya at the foot of a steep hillock is the Naga Pokuna (Cobra Pond) built into a natural rock basin. Originally, a rainwater filled pool, following the establishment of the monastery, springs were tapped to maintain the storage of water. Naga Pokuna was central to the supply of water to the monastery: Lion Pond and Alms Hall too were supplied with water from Naga Pokuna. The name of Naga Pokuna is derived from the five hooded cobra cut in low relief on the rock surface.

A long flight of some six hundred steps from Naga Pokuna leads to Atvehera stupa at Atvehera Kanda hill. Though the stupa at the summit of the hill is smaller than Mahasaya, the view from the location is panaromic.

Descending from Atvehera, at the ruins of the ancient hospital at the foot of the mountain, the main road Mihintale-Galkulama leads to an ancient vihara Indikatusaya to the right hand side. Well protected by a stone wall are ruins of two stupas. Indukatusaya, the larger of the two stupas, is built on an elevated platform paved with stone slabs. The platform is about 5 feet above the ground level and each side is about 40 feet. The stupa has basal terraces that differ in form and style from those of other stupas. The stairways are flanked by balustrades and a plain moonstone.

About half a kilometer from Indikatusaya along the gravel road and on the turning to the left is located Rajagirilena Kanda. On the low hill with a height of about of 100 feet, among the boulders at the summit are caves once occupied by the monks. Fairly roomy cells were formed by brick and clay walls that divide the interior sheltered by an overhanging rock roof. Rajagirilena Kanda with its airy caverns in a pleasant setting is believed to be first dwellings of the Buddhist monks at Mihintale.

A short path of about fifty meters through the boulders at Rajagirilena Kanda leads to Kaludiya Pokuna, the central attraction of the hill named Porodini in the Mihintale Tablets of King Mahinda the 4th. Kaludiya Pokuna, the largest pool at Mihintale measures 200 feet in length and 70 feet in width. Around the pool are the ruins of meditation halls, bathing houses and walled caves. The name Black Water Pool was a result of the dark shadows left upon the waters by the rock boulders and shady trees surrounding the pool. 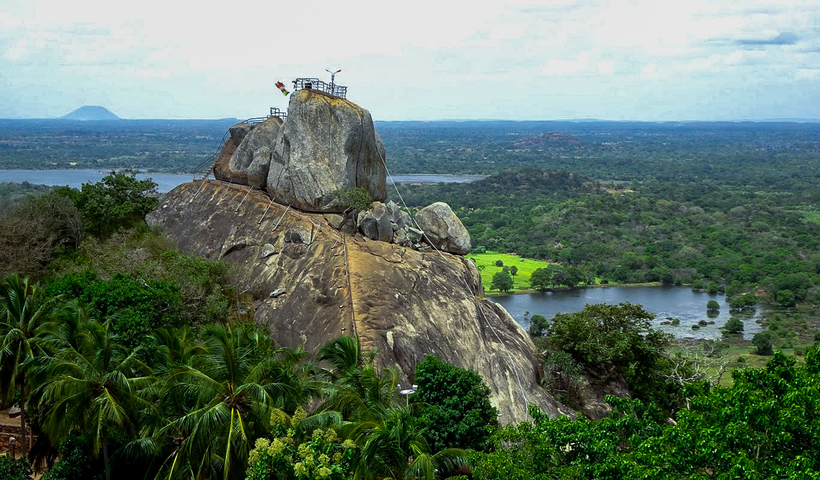 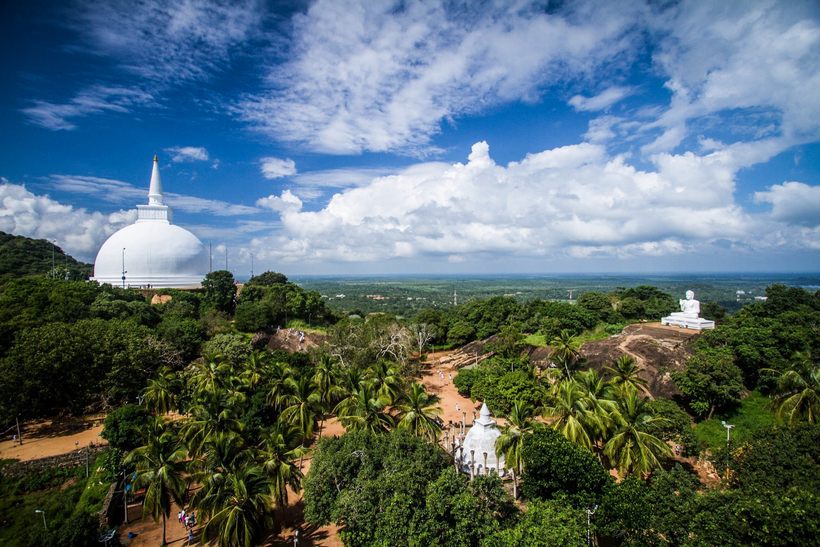 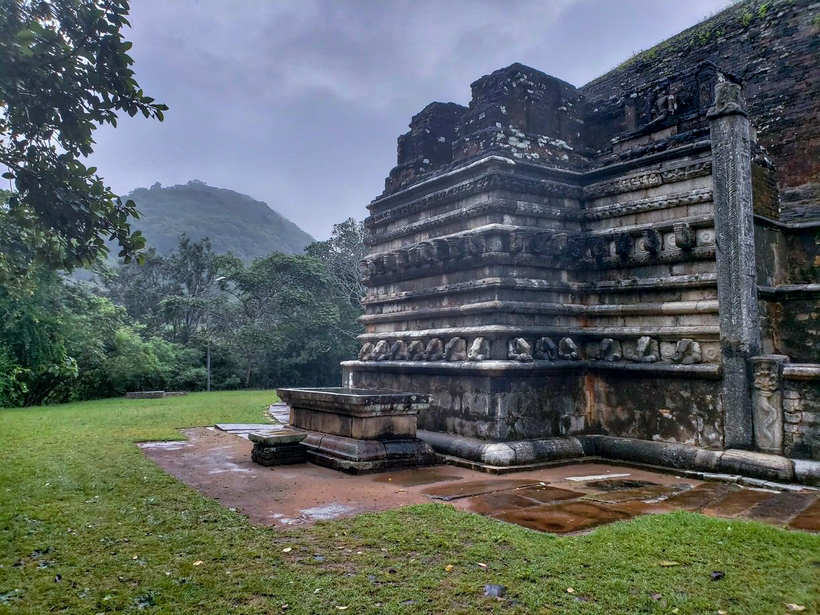 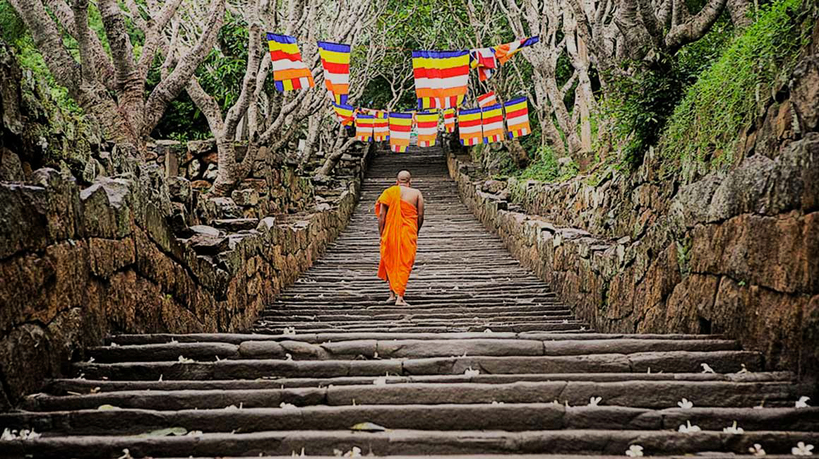 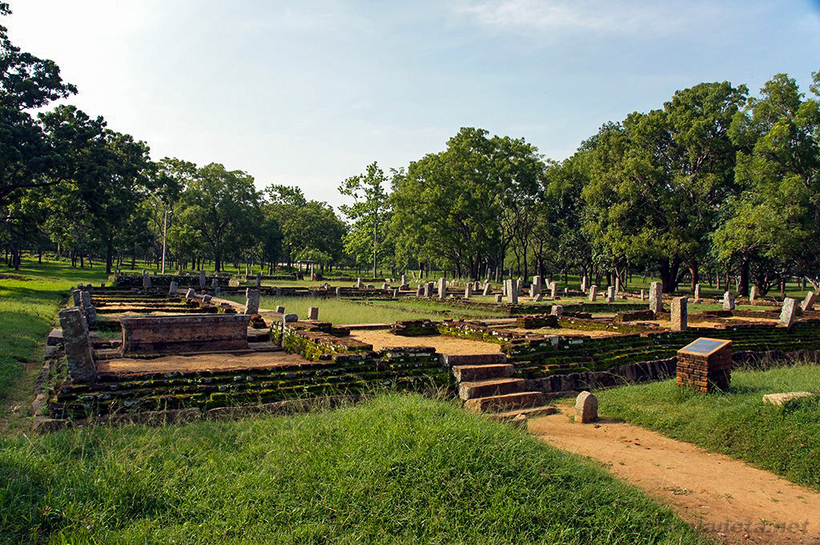 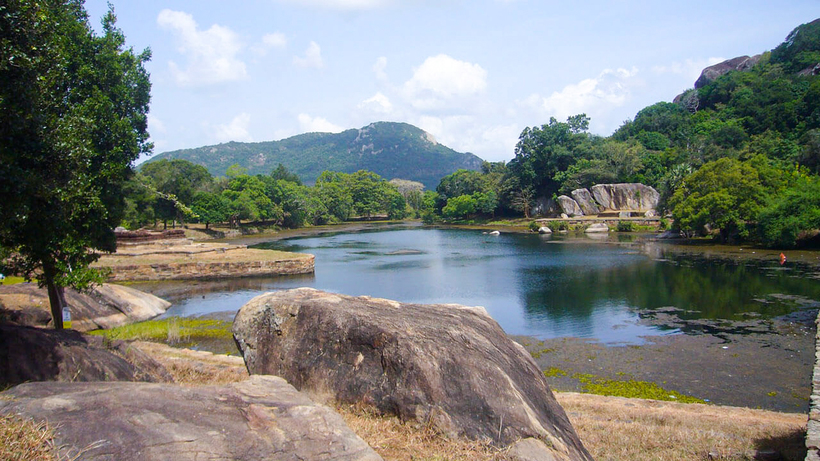