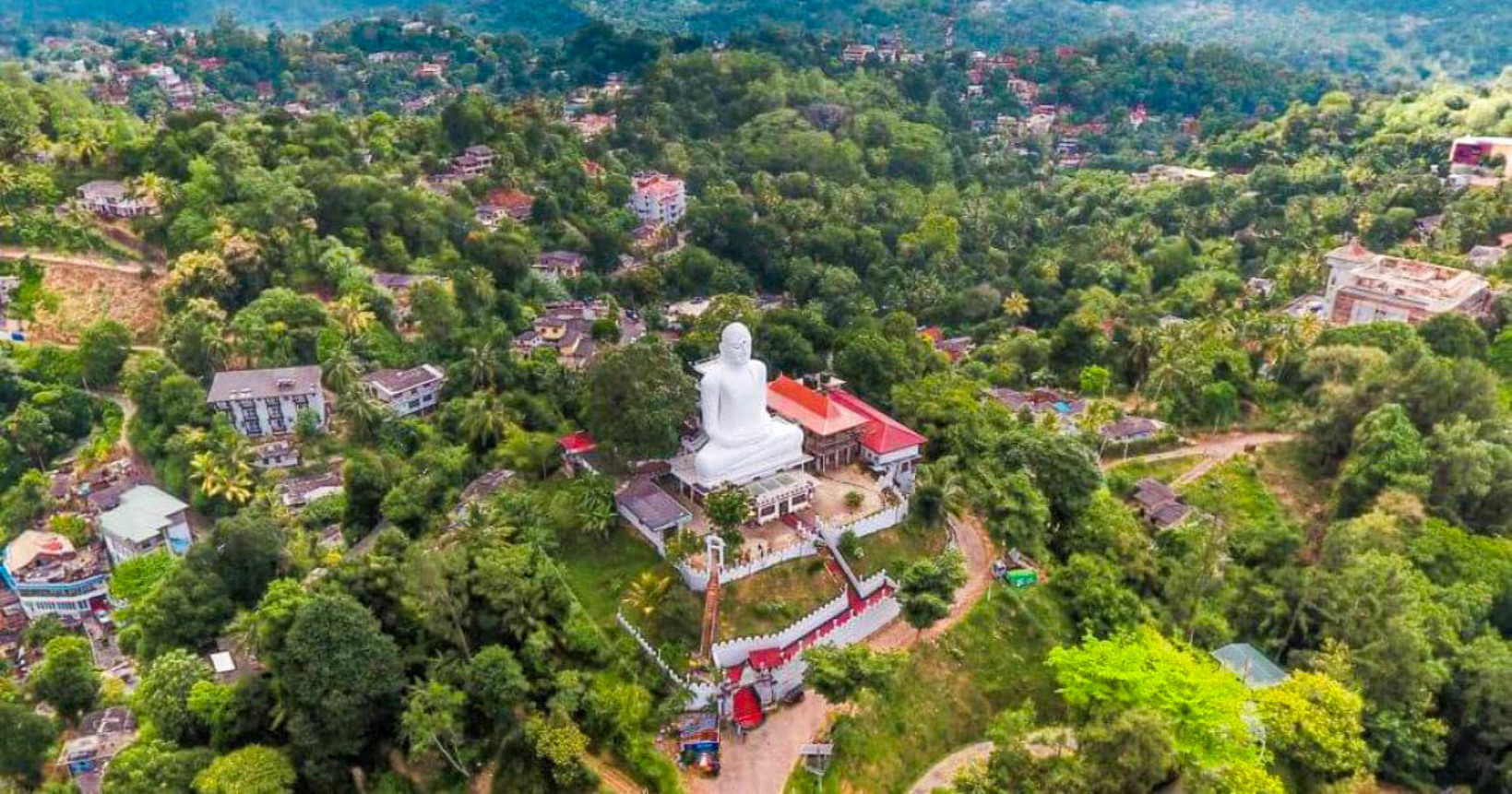 Rising from a hill adjoining the holy city of Kandy is the giant Buddha statue of Bahirawa Kanda. The statue is a mere 2km from the Temple of The Tooth Relic and was built in 1972.

Many legends surround the hill of Bahirawa Kanda which means ‘gnome mountain’; and about how this statue came to be. Chief amongst these are two stories.

The first speaks of an ancient temple to the primitive god of protection, Bahiravar; which was implanted there during the reign of the Nayakkar Kings. During the olden days in India, the standard methods of worship for this god often involved animal sacrifice; though human sacrifice was never involved. But for some reason this practice seems to have gotten twisted in the localisation process; and the priests of this temple threatened the wrath of the god unless hundreds of virgin women were sacrificed in time. The naive people of the region handed over a large number of girls for sacrifice and lived in fear of the god’s wrath. However, this came to an end when the fiance of the Chief of the Royal Mahouts was taken for sacrifice. The man, whose name was Dunuwilla Gajanayake Nilame, used his power in the palace and his bravery to get her released; and caused such a great disturbance that the sacrificing ritual was broken. This marked the end of the people’s fear and superstition; and the temple was abandoned with time.

Another story speaks of how the hill gained the name ‘Gnome Mountain’ or ‘Devil’s Hill’. According to this legend there was a time in the past when the mountain emitted strange noises and engulfed the people who lived nearby in abject fear. They believed that it was the work of an evil gnome and searched for a way to appease it. Meanwhile, unknown to anyone, an actual gnome had infilitrated the palace and taken the place of one of the ministers. Realising the opportunity; the ‘minister’ advised the king that the gnome would be appeased if a beautiful virgin was sacrificed every year, and hence a new superstition began. But then one year; the nominated sacrifice was the lover of the fake minister’s very own son. The villagers kidnapped her during the night, took her to the hill and left her there. The minister’s son discovered this in the morning and immediately set off to rescue her. He fought the gnome , his father, who had been there for his own nefarious purposes; and returned to the village. The alarmed and fearful people had begun to wonder if the rescue of the sacrifice had angered the gnome; when the cunning son quickly made a gnome sound (after all he was a gnome too, being the son of the original gnome). The people the took this to mean that the sacrifice was accepted; and the couple left the village that same night, instead of risk having their trick being discovered.

The Statue and the Sights

The Bahirawakanda Buddha Statue is located alongside the Sri Maha Bodhi Temple which is on the top of the Bahirawa Kanda hill. This beautifully sculpted white statue displays Buddha in the seated Nirvana pose and can be seen from the entire city of Kandy that sprawls out before it. It stands at 88 feet in height and is one of the biggest Buddha statues in Sri Lanka.

Visitors can climb the top of the hill for panoramic views of the City of Kandy, the inside of Bogambara Prison, and the mountain range nearby. It makes for some spectacular photographs and memories. The temple of Bahirawa Kanda is open for worship. Devotees are required to remove their hats and shoes; and can offer flowers or light oil lamps. There is also set of stairs that run behind the Buddha statue, that allow visitors to climb to a greater height for better views of the landscape. However, the best time to visit Bahirawakanda is at night, when the entire statue is lit up and the city of Kandy spreads out in a map of twinkling lights. 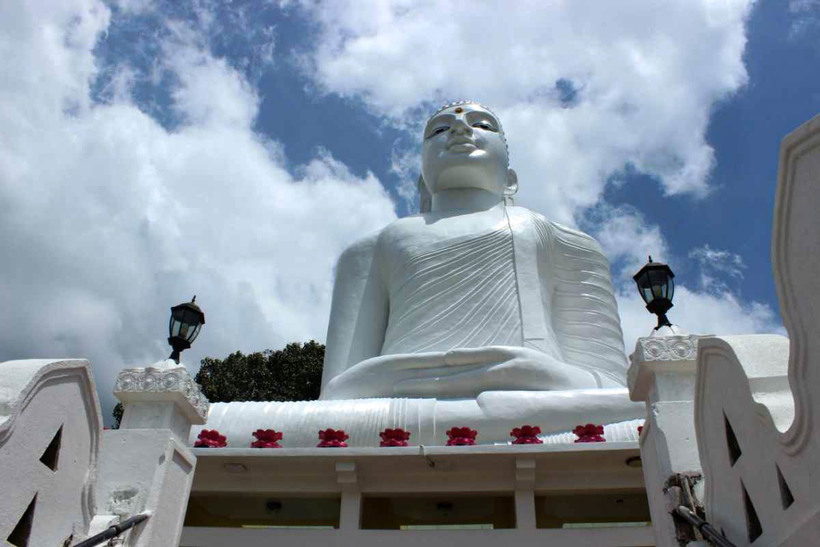 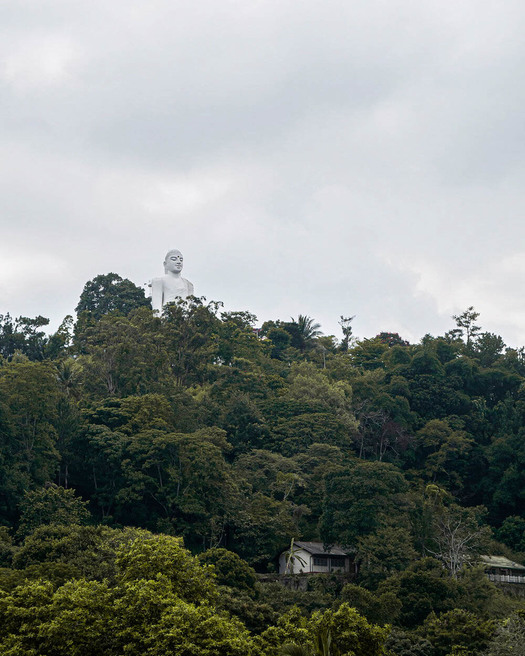 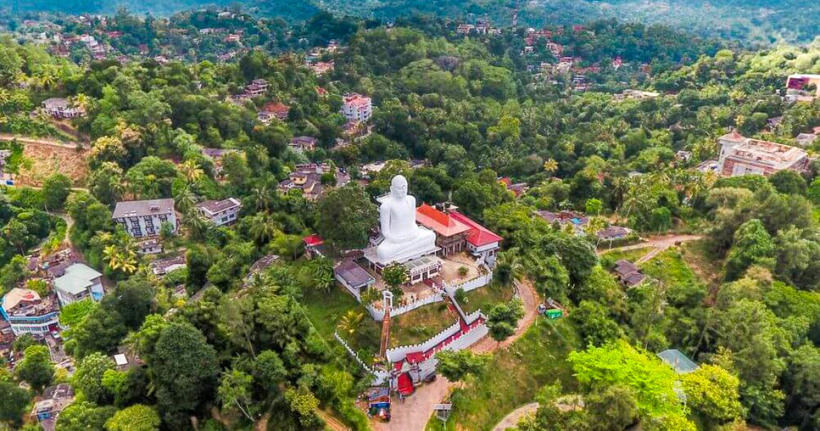 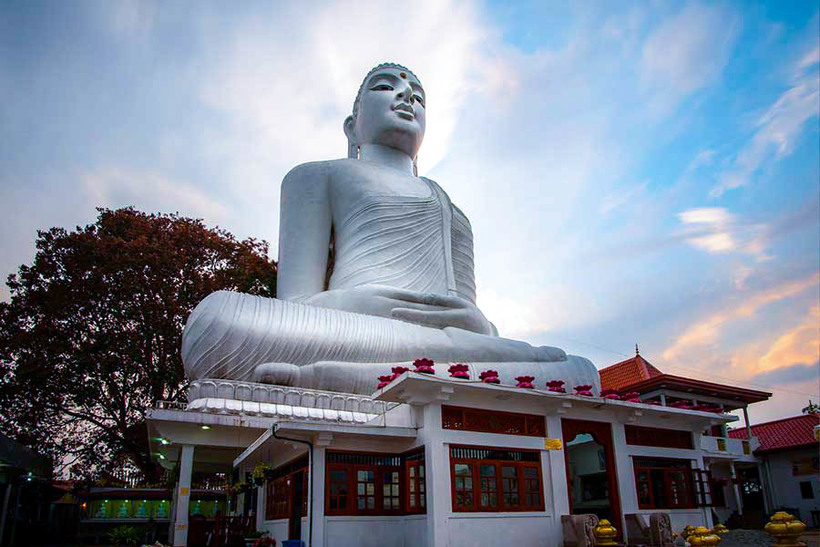 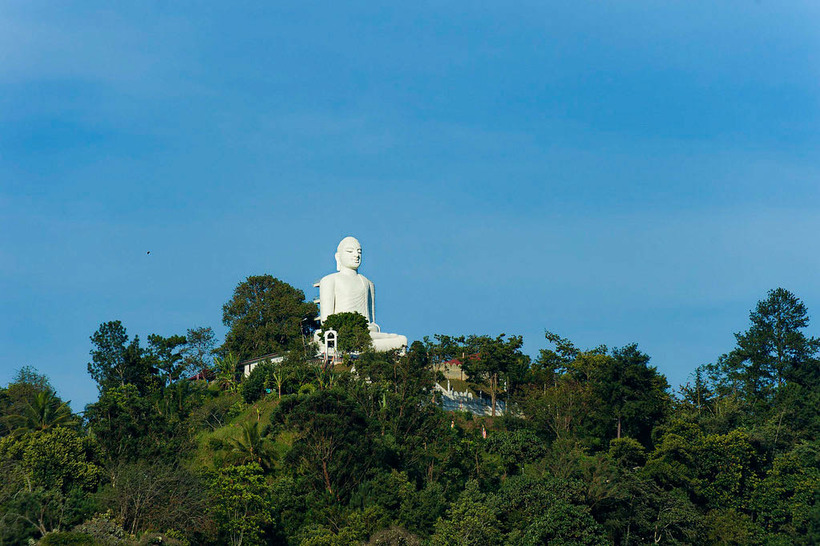 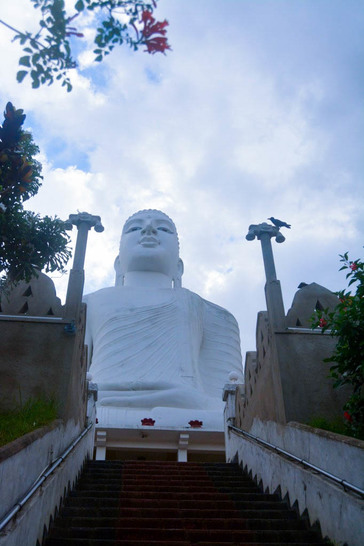