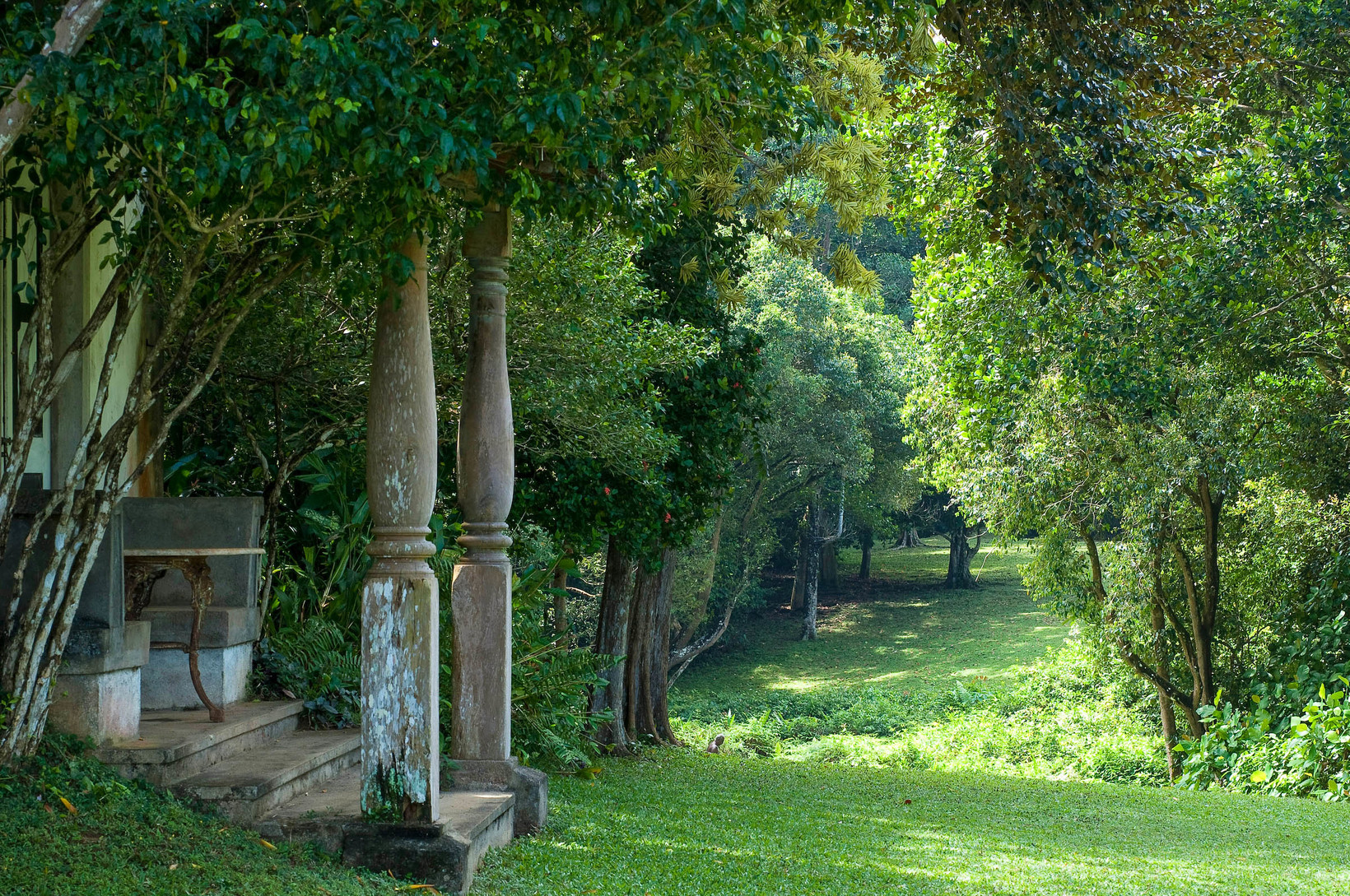 Lunuganga estate is the brainchild of the late architect Geoffrey Bawa (23 July 1919 – 27 May 2003). This country home was his very first muse and his experimental laboratory; while remaining his go-to place for rest and relaxation as his fame increased throughout the years. Designed with the whimsical beauty and eccentric style typical of Bawa; the estate is filled with with a number of art and artifacts from all over Asia and Europe.

The 6.1 hectares (15 acres) property is located on the banks of the Dedduwa Lake in Bentota; not far from the beautiful beaches in that area, and just a hour or so away from Galle. The estate was named Lunuganga by Bawa, ( it means Salt River in Sinhala: Loonu – Salt Ganga – River) for its closeness to a salty river.

Lunuganga Estate was used as a cinnamon plantation during the Dutch era and then a rubber plantation during the reign of the British. The estate had a small bungalow on site to accommodate the workers. Bawa, who had then been a newly appointed lawyer just called to the Bar at the Inner Temple, saw the place in 1947 and fell in love with the expansive gardens. However he was unable to purchase it at the time. In 1948, the bungalow was rented out to a local tax collector. In 1949, Geoffrey Bawa achieved his dream of purchasing the estate in its entirety and and planned to convert the bungalow into a weekend house and the rest of the estate into a tropical version of a European renaissance garden.

It was only after he undertook the project that Bawa recognised his lack of architectural knowledge; and so he went to England to study architecture. After qualifying as an architect he returning to Ceylon in 1958 and joined the architectural practice of Edwards, Reid and Beggs. Bawa began working on his house and the gardens in 1963, and continued to do so for 40 years until his death in 2003.

Since Bawa’s death in 2003, Lunuganga has been managed by a group of his close friends, who formed the Lunuganga Trust in his memory. The gardens are now open to the public and the buildings on the estate are run as a seasonal country home hotel.

The Lunuganga estate has a number of structures and gardens as Bawa experimented with spaces and structures. The main bungalow itself included large comfortable rooms, spacious living and sitting areas, many reading nooks, a library full of books with a few busts interspersed, dining rooms and etc. The garden had many more structures and is a masterpiece of space and beauty.

The entrance court at Lunuganga was created as the main entry to the house after the remodeling by Geoffrey Bawa. At this point he changed the actual entrance of the house back to front.

The Porte’Cochere or portico and the Glass Room were part of the 1980’s additions. They replaced a coconut thatched carport that was part of the original bungalow.

The Red Terrace is so called due to the red laterite ground surface.

This garden is elaborate and beautiful with great views of ponds and other water sources, both natural and artificial. The view down at the water garden was one of Geoffrey Bawa’s favourites.

The yellow courtyard is so named for its ochre coloured walls. This area started off as a simple wall to hold two neo-gothic windows given to Bawa by his friend Anjalendran.

The Black Pavilion forms the eastern end of the water garden and is the axis of the Broad Walk.

The Water Gate at the edge of the Dedduwalake is the departure point for boats sailing over the lake, and to the two islands of Appaladuwa and Honduwa. Excursions still take place from here.

The Hindu Pan is a sculpture of the pagan god, Pan. It was sculpted by one of Geoffrey Bawa’s architectural assistants, Narasingham and was called a "Hindu" Pan by Bawa.

It received its name for the study of the contrasts of Narasingham being a Hindu, while sculpting a pagan god.

The Plain of Jars

The Plain of Jars are sloping grassy plains with an occasional tall tree. The distinguishing feature that Bawa added here are the number of Ming Jars that dot this part of the landscape.

This homely structure was the last addition to the Garden before Bawa’s death. During the construction, Bawa used some of the ideas from his successful designs; the Kandalama Hotel and the Lighthouse Hotel both of which were built around the same time

This hill was once part of the old cinnamon plantation that pre-dated Geoffrey Bawa’s purchase of the estate; and was once overgrown with cinnamon. Bawa named the hill in memory of this.

At the bottom of the Cinnamon Hill in the grove of trees to the north is a small verandah that leads to the Gate House. This construction is a remnant of the era of sprawling mamsion houses that populated the UK; and was where the gatekeepers stayed. It gives a whimsical aura to the entire estate.
The Southern Terrace

The southern terrace is a great place to sit and relax. It can be reached by walking up the gravel entrance road, and past the entry court up the steps to the left.

Perhaps one of the most beautiful landscape views anywhere in the world; this tropical version of a classic romantic garden view connects Lunuganga to some the great garden traditions of the world.

The Western Terrace is a walk past the bust of a Roman; and around the house. Here the lawn that opens out from the main living spaces of the house, the sitting room and the main verandah.

Coastal Ride to Galle from Bentota