Anuradhapura was first settled by Anuradha, a follower of Prince Vijaya the founder of the Sinhala race. Later, it was made the Capital by King Pandukabhaya at about 380 B.C.According to the Mahavamsa, the epic of Sinhala History, King Pandukabhaya’s city was a model of planning. Precincts were set aside for huntsmen, for scavengers and for heretics as well as for foreigners. There were hostels and hospitals, at least one Jain chapel, and cemeteries for high and low castes. A water supply was assured by the construction of tanks, artificial reservoirs, of which the one named after the king itself exists to this day under the altered name of Baswakkulam.

It was during the reign of King Devanampiya Tissa (250 – 210 B.C.) that the Arahat Mahinda, son of the great Buddhist Emperor Asoka, led a group of missionaries from North India to Sri Lanka. With his followers he settled in a hermitage of caves on the hill of Mihintale – the name which derives from Mahinda’s own.The new religion swept over the land in a wave. The King himself donated land for a great monastery in the very heart of the city which was also his own Royal Park – the beautiful Mahamegha Gardens.The Buddhist principality had had but a century to flourish when it was temporarily overthrown by an invader from the Chola Kingdom of South India. The religion, however, received no set-back. At this time far away on the southeast coast, was growing up the prince who was to become the paladin of Sinhala nationalism: Dutugamunu (161 – 137 B.C)

For his entire martial prowess, King Dushta Gamini must have been a man of singular sensibility. He built the MIRISAVETI DAGOBA and the mighty Brazen Palace, which was nine stories high and presented to the Mahasanga (order of monks). But, the RUWANVELI DAGOBA, his most magnificent creation, he did not live to see its completion.

Two more, at least, of the Anuradhapura Kings must be mentioned – if only because some of the greater monuments are indisputably attributable to them.

The earlier of these was Vattagamani Abhaya (Valagamba) (103 & 89-77 B.C.) in the first year of whose reign Chola invaders again appeared and drove him temporarily into hiding. For fourteen years, while five Tamil Kings occupied his throne, he wandered often sheltering in jungle caves. It is recorded that as in his plight as he passed an ancient Jain hermitage, an ascetic, Gin called and taunted him. “The great black lion is fleeing!” Throughout his exile the gibe rankled. Winning the Kingdom back at last, he razed Giri’s hermitage to the ground, and built the ABHAYAGIRI Monastery. The name is a wry cant on his own name and the tactless hermit’s as well as (meaning mountain of fearlessness) a disclaimer of his cowardice!

Anuradhapura was to continue for six hundred years longer as the national capital. But as the protecting wilderness round it diminished with prosperity and internecine struggles for the royal succession grew, it became more and more vulnerable to the pressures of South Indian expansion; and the city was finally abandoned and the Capital withdrawn to more secluded fastnesses.

But the monuments of its heyday survive, surrounded by such beauties as they become the past: the solemn umbrage of trees, the silence of cold stone, and the serenity of the sheltering sky.

The construction of Ruwanweliseya was prophesied by the great Buddhist missionary Maha Thera Arhath Mahinda, who brought Buddhism to Sri Lanka from India during the reign of King Devanampiya Tissa (250-210 BC).

Having heard of the prophesy of Maha Thera Mahinda to the effect that a great Stupa would be built by a great king at a certain location at Anuradhapura, King Devanampiya Tissa had an inscription pillar planted at the said location narrating the prophesy.

A little more than a century later, the inscription pillar was destined to be found by a fitting hero: King Dutugamunu (101-77 B.C.), who rescued the Sinhalese Buddhist nation from the Dravidian invader. “The Hero of the Nation” wasted no time and commenced the construction of Ruwanweliseya also named Maha Stupa or Ratnapali Stupa or Swarnamali Stupa.

Following the declaration of the king that no work at the great stupa should go unrewarded, a streak of luck dawned on the pious king: a rich vein of Silver was discovered at a village subsequently renamed Ridigama meaning Village of Silver in Sinhala. The construction of the stupa cost the king 6.4 million coins in wages alone.

Standing at a circumference of 370 feet and a height of 180 feet, Ruwanweliseya, the third largest stupa of Sri Lanka, is the focal point of the Maha Vihara, the first monastery of Sri Lanka. It is believed that a considerable amount of relics of Buddha is enshrined in this glorious stupa, built in replicating the shape of a bubble of water. At the eastern entrance to the stupa is a statue of King Dutugamunu. According to the records made by Fa Hsien, the Chinese Buddhist monk, who toured Sri Lanka in the 5th century CE, Maha Vihara monastery housed no less than 3000 Buddhist monks.

Since the death of King Dutugamunu, “The Hero of the Nation”, the great stupa had been renovated by a succession of Sinhalese kings till King Nissanka Malla (1187-1196 AC). By the 19th century, Anuradhapura, once the greatest monastic city of the world, also named Anurogrammon, by the Greek cartographer Claudius Ptolemy (90-168 AD) was deserted; Ruwanweliseya was in ruins.

In the year 1893, a patriotic and pious Buddhist monk called Naranvita Sumanasara Thera supported by a community of humble villagers in the region, took upon the Herculean task of reconstructing the great stupa. The community resulted in forming a society called Ratnamali Chaityawardhana Society.

Today, all we have are 1600 stone pillars in 40 rows of the Brazen Palace. A great gleaming roof, made of copper, slanting down to all four sides from the centremost point gave shelter to 1000 windowed chambers in 9 stories rising to a height of 150 feet.

According to the Mahavamsa, the great historical Chronicle of Sri Lanka:

“A thousand well-arranged chambers were in the prasada, overlaid with various gems and adorned with windows. The king had a gem-pavilion set up in the middle. It was adorned with pillars consisting of precious stone, on which were figures of lions, tigers and so forth, and shapes of devatas. A bordering of a pearl network ran round the edge of the pavilion and thereon was a coral vedika.” (Ch. 27)

That was during the reign of King Dutugamunu, ‘The Hero of the Nation”. Such was the splendour of the monumental Brazen Palace built on the location of the chapter house called Mahamucala Malala consecrated by Maha Thera Mahinda, the apostle of Gauthama Buddha who devoted his lifetime to propagating Buddhism in ancient Lanka.

Adjoining Lohapasada or Brazen Palace are ruins of an Alms-hall called Catussala of the Buddhist monks of Mahavihara monastery. At the eastern corner of these ruins is a rice boat, a 45 feet long vessel cut into a slab of rock that could contain alms to at least 3000 monks at a time. The rice boat corresponds well with the narration of the Chinese Buddhist scholar Fa-Hsien. According to him, there were 3000 monks at the Maha vihara monastery at Anuradhapura.

Ground or air transfers from different airports or cities to Anuradhapura city.

Ground or air transfers from Anuradhapura city to different airports or cities. 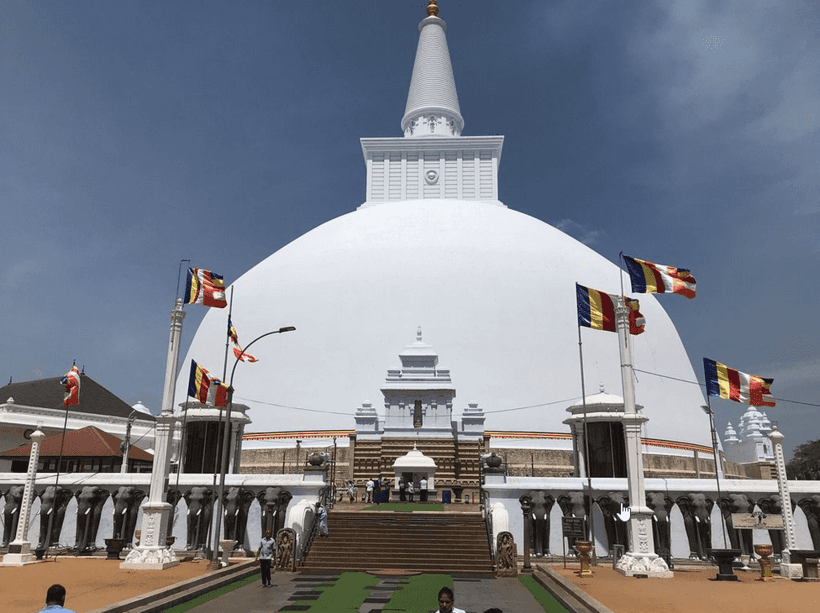 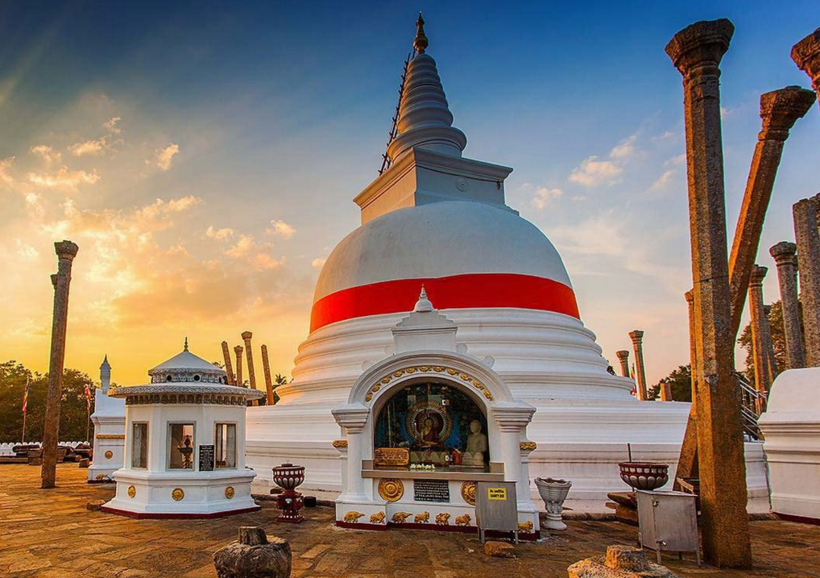 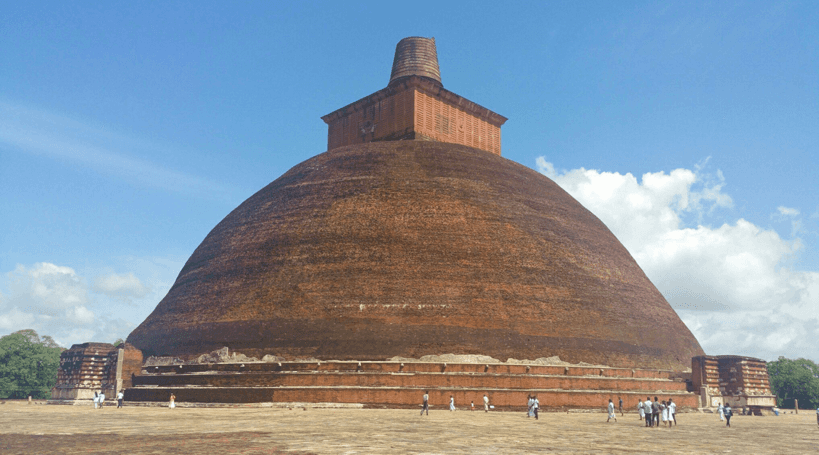 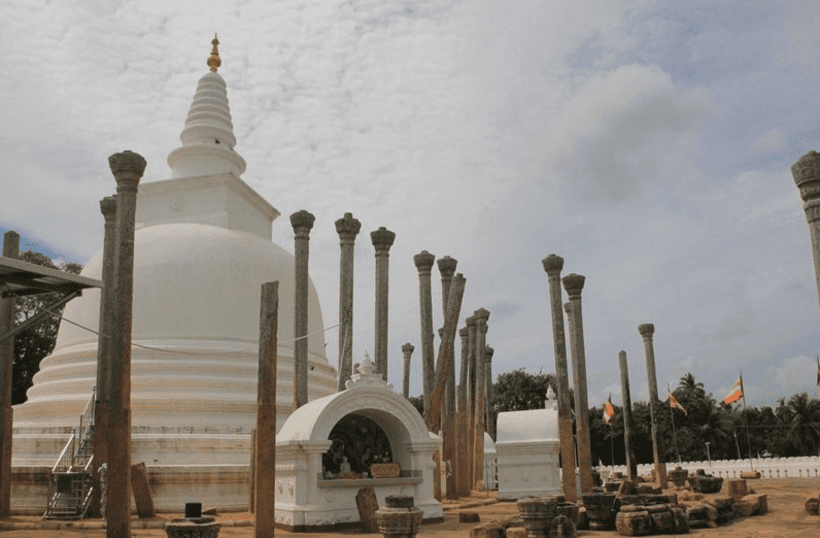