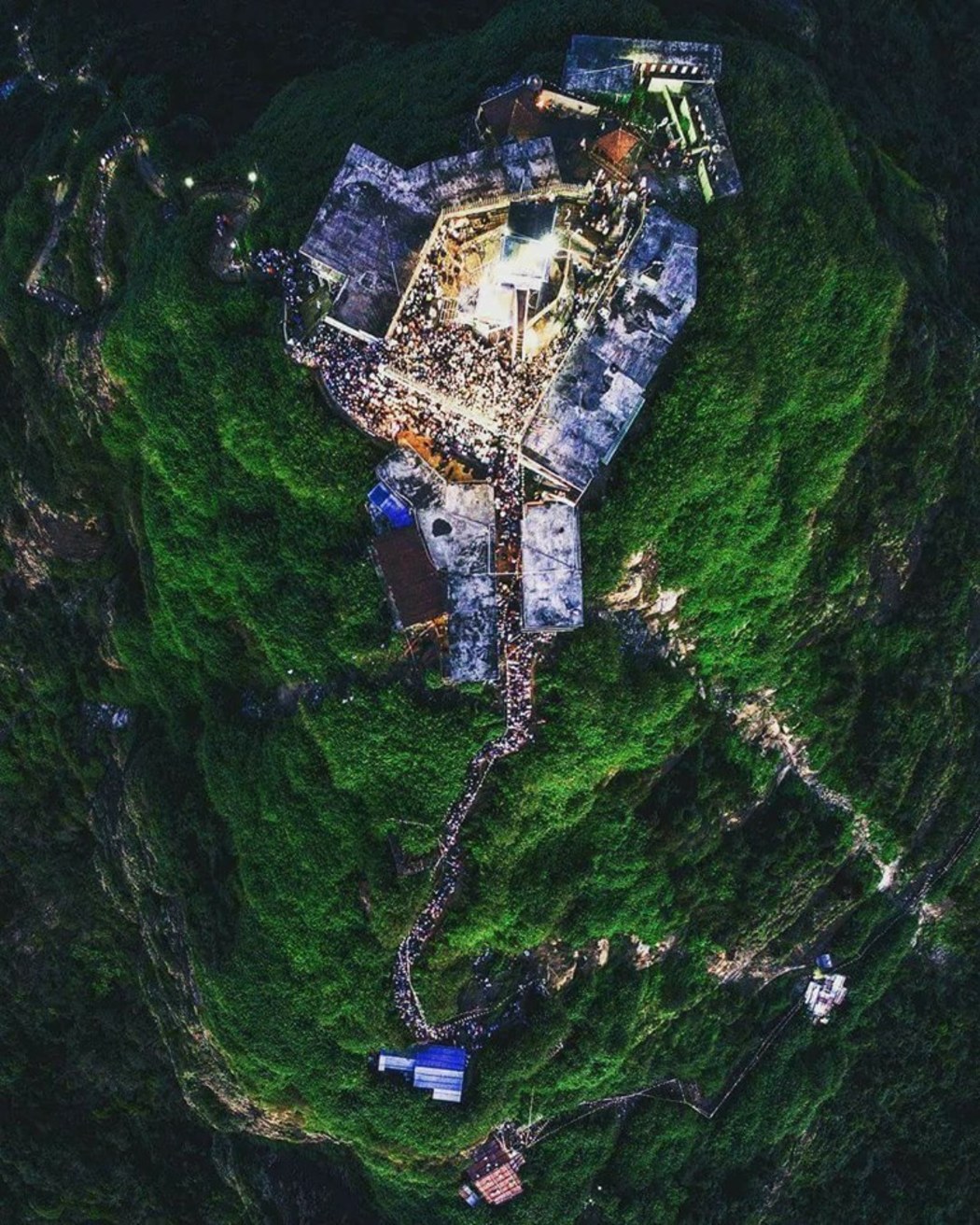 The amazing Adam’s Peak is Sri Lanka’s fourth highest mountain at 2244m and is located 40km northeast of Ratnapura.

Adam’s Peak or the Sri Pada is an important pilgrim site. Buddhist believe the impression on the summit is the footprint of lord Buddha himself. Though it takes around 5 hours to reach the peak by foot, devotees of many religions climb the mountain daily to invoke blessings. The mountain is also named as Samanala Kanda or Butterfly Mountain.

Adam’s Peak is surrounded, largely by the forested hills, with no mountain of comparable size anywhere near the vicinity. The region of Peak Wilderness Sanctuary that encompass the Adam’s Peak together with Horton Plains National Park and Knuckles Range, all in the Central Highlands of Sri Lanka is recognized as a World Heritage Site in the year 2011.

Begin from the Base

The most popular routes are the Hatton-Nallathanni & Ratnapura-Palabaddala due to the picturesque views and postcard worthy scenery that can be encountered along them.

Once you reach a final node (Nallanthanni or Palabaddala or Erathna) there begins the difficult journey through the jungle on foot. Most of the pilgrims use the Hatton route as the journey can be reduced by more than five kilometers even though the slope of this route is much greater than the others.

The Season and Timing

The greater part of the track leading from the base to the summit of Adam’s peak consists of dozens of steps built in cement or rough stones being illuminated with electric power lines. The night ascent is safe even when accompanying kids. With the track having night rest stops and wayside stalls and kiosks that serve refreshments, the goal of reaching the summit on time to enjoy the spectacle of sunrise made even easier and less tiresome.

You could also arrange to climb up during the day, camp overnight enjoying the starry spectacle at the summit, witness the majesty of the beautiful sunrise the following morning and then descend. The daytime ascent affords the luxury to climb at a leisurely pace and have plenty of time to enjoy the views all round.

Accommodation on the summit of Adam’s peak is basic and you would have to bring your own food and perhaps a blanket or sleeping bag. However, whenever you decide to go, check the weather report before setting out. Rain can make for a miserable trip and it is more likely that cloud or mist will obscure the view.

The Sama Chatiya at Adam’s Peak

On the way up, after a few minutes climb you can find the Sama Chatiya, the World Peace Pagoda.

This stupa was built by the famous Japanese Buddhist monk Ven Nichi Fuji in 1976. Today it is maintained by several Japanese monks. Though not much could be made out of the stupa and the landscape in the night ascent, during daytime the Peace Pagoda stands out dramatically with the amazing backdrop of Adam’s Peak.

Majestic Sunrise and the Shadow of the Mount

When the sun is just about to rise, the pilgrims and tourists rush to the eastern side to witness an amazng spectacle. The sun almost leaps over the eastern horizon drawing a perfect triangle of a shadow of the mountain spreading over the western backdrop of the mountain. As the sun keeps on rising, the shadow shifts towards the base of the mountain until it completely disappears, a grand finale to a breathtaking natural spectacle.

On the summit of Adam’s Peak is located a shrine, a belfry and a resting place. The center of the attraction is a stone tablet covering the sacred footprint of Lord Buddha. Most pilgrims attempt the climb solely for the purpose of paying homage to the shrine. This is where mountains sinhala name originates; Sri Pada(Sinhala for Resplendent feet).

Nearly as much has been written about the sacred footprint as has been about the mountain itself. According to Giovani de Marigolli a 13th century seafarer, “The size, I mean the length thereof, is two and a half of our palms, about half a Prague ell. And I was not the only one to measure it, for so did another pilgrim, a Saracen from Spain”.

Robert Knox, an Englishman who lived in Sri Lanka in the 17th century, wrote that it was “about two feet long”.

Captain John Ribeyro in his account of Sri Lanka presented to the king of Portugal in 1687 claimed that the footprint “could not be more perfect had it been done in wax”.

In 1859 James Emerson Tennent, the colonial secretary of Ceylon during the period of 1845 to1850, described the footprint as “a natural hollow artificially enlarged, exhibiting the rude outline of a foot about five foot long”.

Those descending along the Ratnapura track can bear witness to large chains riveted into the sheer rock face of the Adam’s Peak. The Muslims believe the iron chains were fixed by Alexander the Great. The Zaffer Namah Sekanderi, a 15th century Persian poem celebrating the exploits of Alexander describes, “he fixed thereto chains with rings and rivets made of iron and brass, the remains of which exist even today, so that travelers, by their assistance, are enabled to climb the mountain and obtain glory by finding the sepulcher of Adam”.

However the Sinhalese records reveal that the chains were fastened onto the rock face by King Vijayabahu (1058-1114 AD).

The Mahavamsa records a stipulation by King Vijayabahu: ‘Let no one endure hardship who goeth along the difficult pathways to worship the Footprint of the Chief of Sages on Samantakuta Mountain’, he caused the village of Gilimalaya which abounds in rice fields and other lands, to be granted to supply pilgrims with food. And at the Kadatigama road and at the Uva road he built rest houses”

According to the Mahavamsa; the historical chronicle of Sri Lanka, Lord Buddha visited the island three times. It was during the last sojourn of Buddha, at the request of the deity of Adam’s Peak God Maha Suman Saman, the footprint was planted upon the summit of the rock.

The Chrakasamvara Tantra of Mahayana Buddhism reveals the tale of Lord Buddha leaving the impression of his foot on a mountain. However the failure to record the name of the mountain has resulted in a mistaken identity by a Tibetan scholar a leading to Mount Kailash in the western Himalayas.

Beliefs by the Christians, Hindus and Muslims concerning footprint upon the summit of Adam’s Peak Sri Pada.

Tamil Hindus consider it as the footprint of Lord Shiva. It is also fabled that the mountain is the legendary mount Trikuta the capital of Ravana during the Ramayana times from where he ruled Lanka.

Muslims and Christians in Sri Lanka ascribe it to where Adam, the first Ancestor, set foot as he was exiled from the Garden of Eden. The legends of Adam are connected to the idea that Sri Lanka was the original Eden itself.

The Mount of Many Names

The name Adam’s peak had prior to the arrival of Buddhism in Sri Lanka, is Samantakuta (Peak of Saman) that refers to the mountain as the abode of god Maha Suman Saman.

Sri Pada (Sanskrit for sacred foot) has been name in which mountain has etched into the memory of Srilankans.

Gems found in the mountain had given birth to the name of Ratnagiri (Sinhala for jeweled hill) which is no surprise since the district of Ratnapura is renowned for its beautiful gems.

The long flights of samanala (Sinhala: butterflies) that frequent the mountain during their annual migrations to the region has resulted in naming the mountain Samanala Kanda (Sinhala for the hill of the butterflies).

Adam’s Peak is the name given to the mountain by the British Colonialists (1815-1948) in Sri Lanka, then known to the world as Ceylon.

Sri Pada also known as Adam’s Peak is an ancient pilgrimage site, which has long attracted thousands of pilgrims from all faiths. It is the pilgrimage to the sacred mountain, Sri Pada, popularly known in English as Adam’s Peak. This conical mountain is 7,360 feet high, soaring clear above the surrounding mountain ranges. According to history, when the Buddha visited Sri Lanka he placed one foot on the north of the royal city and the other on Sumana-kuta (Adam’s Peak) fifteen yojanas, or about hundred miles distant. The legendary evidence of Siam brings up that the Buddha left the print of his left foot on Adam’s Peak, and then, in one stride, strode across to Siam, (now Thailand) where he left the impression of his right foot. It is called Phra Sat, and its appearance is supposed to be like that of the foot print on Adam’s Peak and of similar size. Broad steps lead up to this walled enclosure containing the rock over which is a tower-like structure. The portion marked off as having the imprint of the Buddha’s foot is about five feet seven inches long and two feet seven inches broad.
The hole in the rock in Thailand, which is believed to have the imprint of the Buddha’s right foot, is about five feet long and two feet broad. Buddhists attribute this universal size to the fact (such is the belief) that the Buddha was about thirty-five feet tall. The real footprint on Adam’s Peak is believed to be set in jewels beneath the visible rock and Hindus believe it that of the god Siva. The Tamil name of the rock (Civan-oli-pata) means “the mountain path of Siva’s light”. Muslims believe the footprint to be that of Adam (hence the name Adam’s Peak); Christians, that of St. Thomas, the disciple Jesus. Alongside the rock is a shrine containing images (one of which is made of silver) of the God Saman and a Brahmin priest officiates at this shrine. In front of the shrine is a small table on which pilgrims place camphor and lighted candles. 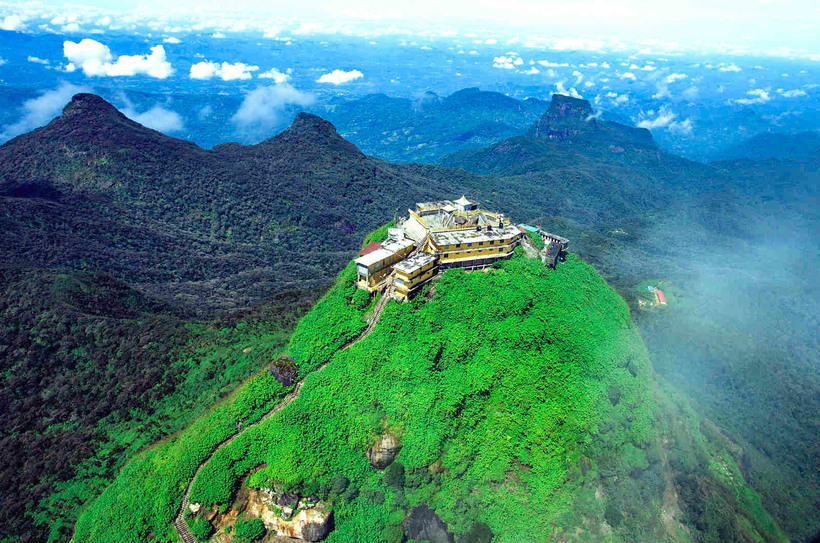 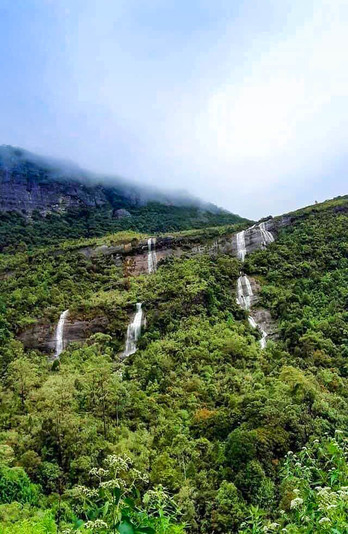 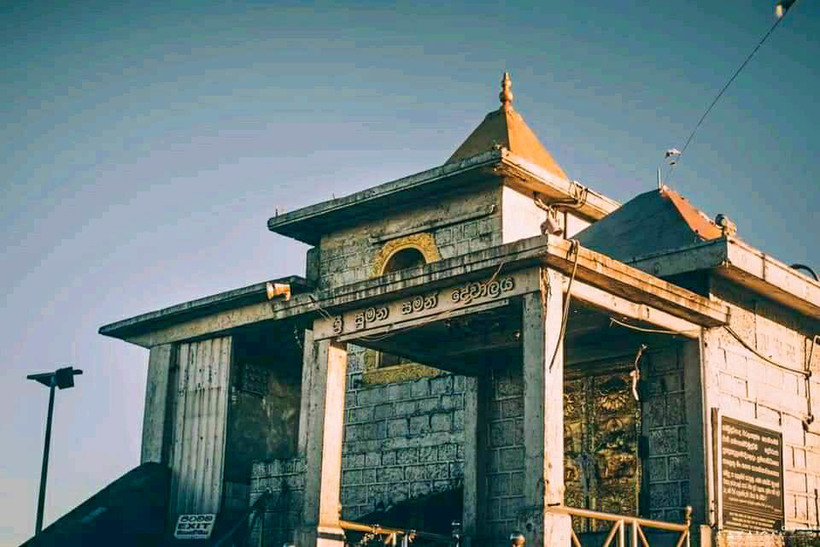 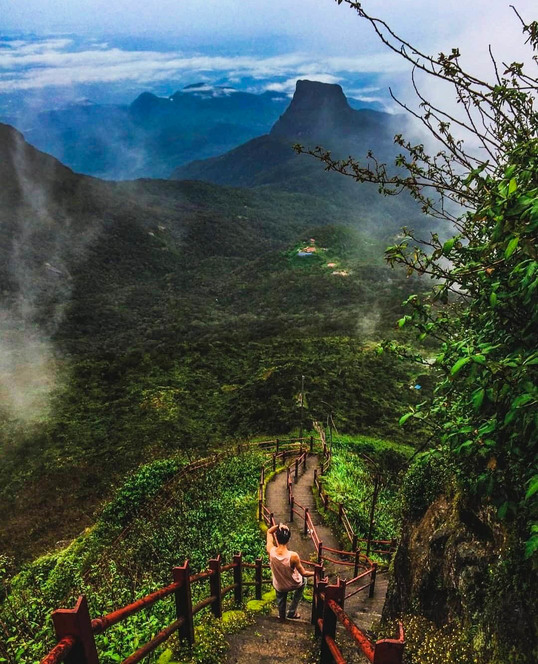 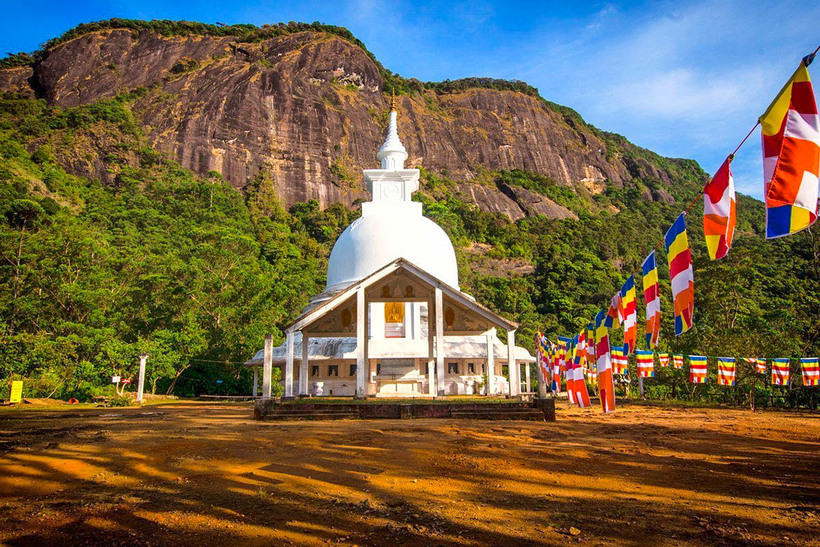 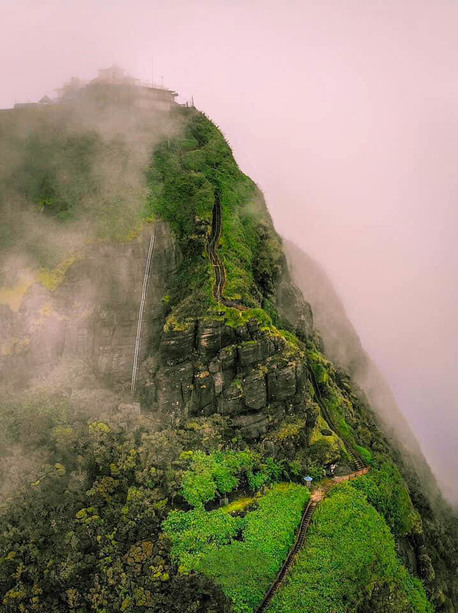