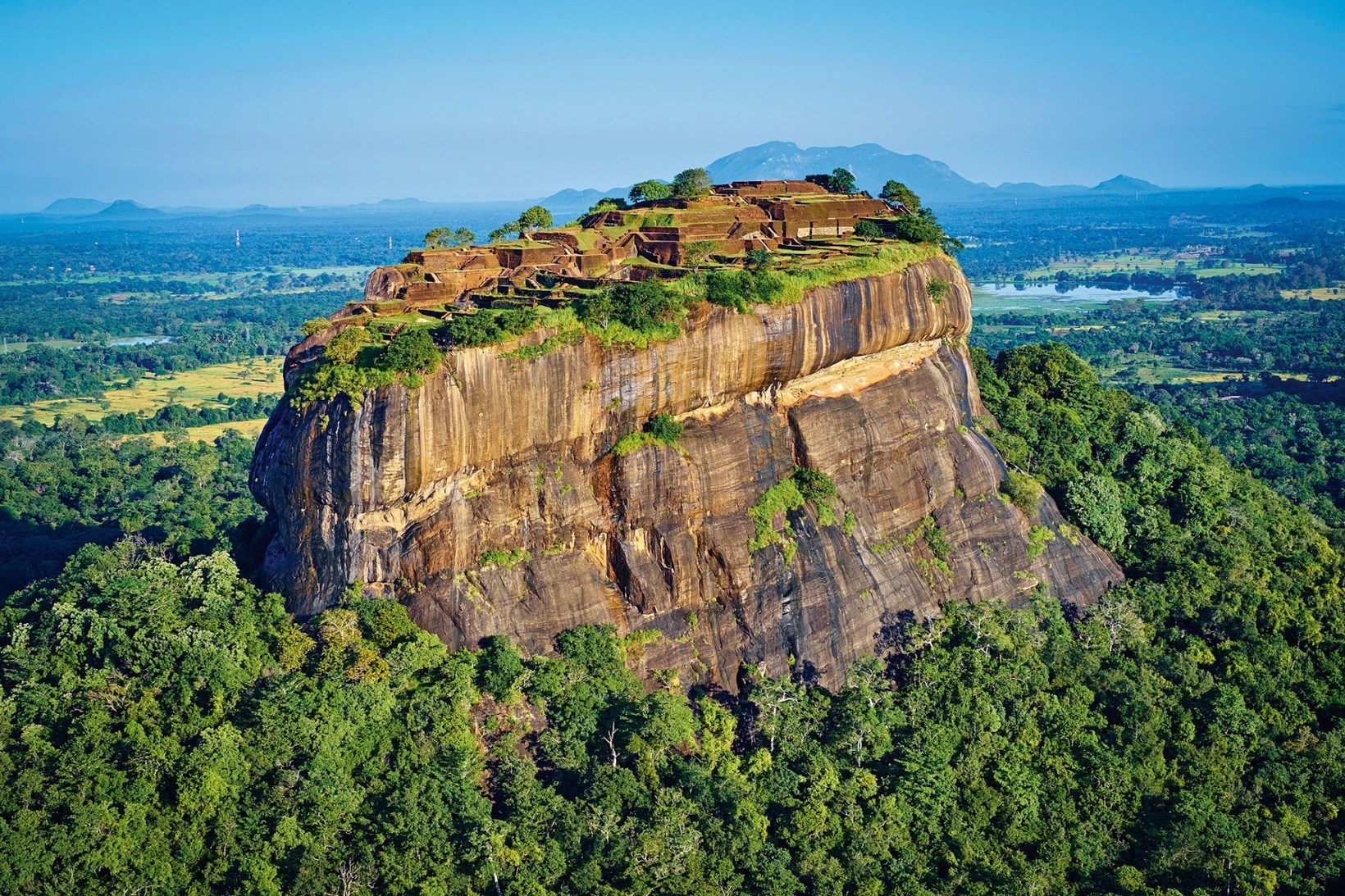 According to inscriptions found in the caves which honeycomb the base of the rock fortress, Sigiriya served as a place of religious retreat as far back as the third century BC, when Buddhist monks established refuge in the locale. It wasn’t until the fifth century AD, however, that Sigiriya rose briefly to supremacy in Sri Lanka, following the power struggle which succeeded the reign of Dhatusena (455-473) of Anuradhapura. King Dhatusena had two sons, Mogallana, by one of the most desired and finest of his queens, and Kassapa, by a less significant consort. Upon hearing that Mogallana had been declared heir to the throne, Kassapa rebelled, driving Mogallana into exile in India and imprisoning his father, King Dhatusena. The legend of Dhatusena’s subsequent demise offers an enlightening illustration of the importance given to water in early Sinhalese civilization.

Threatened with death if he refused to reveal the whereabouts of the state treasure, Dhatusena agreed to show his errant son its location if he was permitted to bathe one final time in the great Kalawewa Tank, of which the construction he had overseen. Standing within the tank, Dhatusena poured its water through his hands and told Kassapa that this alone was his treasure. Kassapa, none too impressed, had his father walled up in a chamber and left him to die. Mogallana, meanwhile, vowed to return from India and reclaim his inheritance. Kassapa, making preparations for the expected invasion, constructed a new dwelling on top of the 200-metre-high Sigiriya rock – a combination of pleasure palace and indestructible fortress, which Kassapa intended would emulate the legendary abode of Kubera, the god of wealth, while a new city was established around its base. According to folklore, the entire fortress was built in just seven years, from 477 to 485 AD.

The long-awaited invasion finally materialized in 491, Mogallana having raised an army of Tamil mercenaries to fight his cause. Despite the benefits of his indestructible fortress, Kassapa, in an act of fatalistic bravado, descended from his rocky abode and rode boldly out on an elephant at the head of his troops to meet the attackers on the plains below. Unfortunately for Kassapa, his elephant took fright and bolted leading the battle. His troops, thinking he was retreating, fell back and left him to face off the battle. Facing capture and defeat, Kassapa killed himself. Following Mogallana’s quest, Sigiriya was handed over to the Buddhist monks, after which its caves once again became home to religious ascetics seeking peace and solitude. The site was finally abandoned in 1155, after which it remained largely forgotten, except for brief periods of military use by the Kingdom of Kandy in the sixteenth and seventeenth centuries, until being rediscovered by the British in 1828.

The Boulder Gardens and Terrace Gardens

Beyond the Water Gardens the main path begins to scale up through the unusual Boulder Gardens, constructed out of the huge boulders which lie tumbled around the foot of the rock, and offering a naturalistic wildness as opposed to the neat symmetries of the water gardens. Many of the boulders are notched with lines of fissures — they look rather like rock-carved steps, but in fact they were used as footings to support the brick walls or timber frames of the numerous buildings a which were built against or on top of the boulders – complex to imagine now, although it must originally have made an extremely picturesque sight.

The gardens were also the centre of Sigiriya’s monastic activity before and after Kassapa: there are approximately twenty rock shelters hereabouts which were used by monks, some containing inscriptions dating form between the third century BC and the first century AD. The caves would originally have been plastered and painted, and traces of this ornamentation can still be seen in a few places; you’ll also notice the dripstone ledges which were carved around the entrances in many of the caves of to prevent water from running into them. The Deraniyagala cave, just to the left of the path shortly after it begins to ascend through the gardens (there’s no sign), has a well-preserved dripstone ledge and traces of old paintings including the faded remains of various Apsara figures very similar to the famous Sigiriya Damsels further up the rock. On the opposite side of the main path up the rock, a side path leads to the Cobra Hood Cave, named for its strange decoration and a very faint inscription on the ledge in archaic Brahmi script dating from the second century BC.

Follow the path up the hill behind the Cobra Hood Cave and up through “Boulder Arch No.2” (as it’s signed), then turn left to reach the so-called Audience Hall, where the wooden walls and roof have long since disappeared, but the impressively smooth floor, created by chiseling the top off a single enormous boulder, remains, along with a five-meter-wide “throne” also cut out for a hall, though it’s more likely to have served a purely religious function, with the empty throne representing the Buddha. The small cave on the path just below the Audience Hall retains colorful splashes of various paintings on its ceiling (though now almost obliterated by contemporary graffiti) and is home to another throne, while a couple of more thrones can be found carved into nearby rocks.

Carry on back to the main path, then head on up again as the path – now a sequence of walled – in steps – begins to climb steeply through the terrace gardens, a series of rubble – retaining brick and limestone terraces that stretch to the base of views back down below.

The king’s Upper Palace is located at the flat top of the Sigiriya Rock. In the middle terrace is the Lion Gate and the Mirror Wall, with its frescoes. The king’s Lower Palace clings to the slopes below the rock. The moats, walls and gardens of the palace extend for a few hundred meters from the base of the rock.

Visitors arrive outside the outer moats, with a magnificent view of the rock rising above the trees in the mid distance. Paths through the complex of moats and gardens lead to the foot of the slope. Stone stairways are found along the steep slope at the base of the rock, winding through the remains of the lower parts of the palace, reaching a terrace that traverses along the lower edge of the vertical face of the rock. The rock above this terrace, known as the mirror wall, was at one time adorned with frescoes, some of which can still be seen, though unfortunately now much are faded. At the end of the terrace beneath the highest part of the rock, the terrace opens out into a substantial courtyard.

From here the climb to the top of the rock is via a modern iron stairway that reaches the rock face through the remains of the original brick gateway, the Lion Gate, now degenerated to a massive pair of brick paws. The ruined paws are all that remain of a huge head and fore paws of a lion, whose open mouth served as the main entrance to the royal palace. The route continues around, across and up the cliff face via a rather airy iron staircase, a modern replacement for the original brick stairway – that vanished along with the lion’s head during the 1400 years since the palace was constructed.