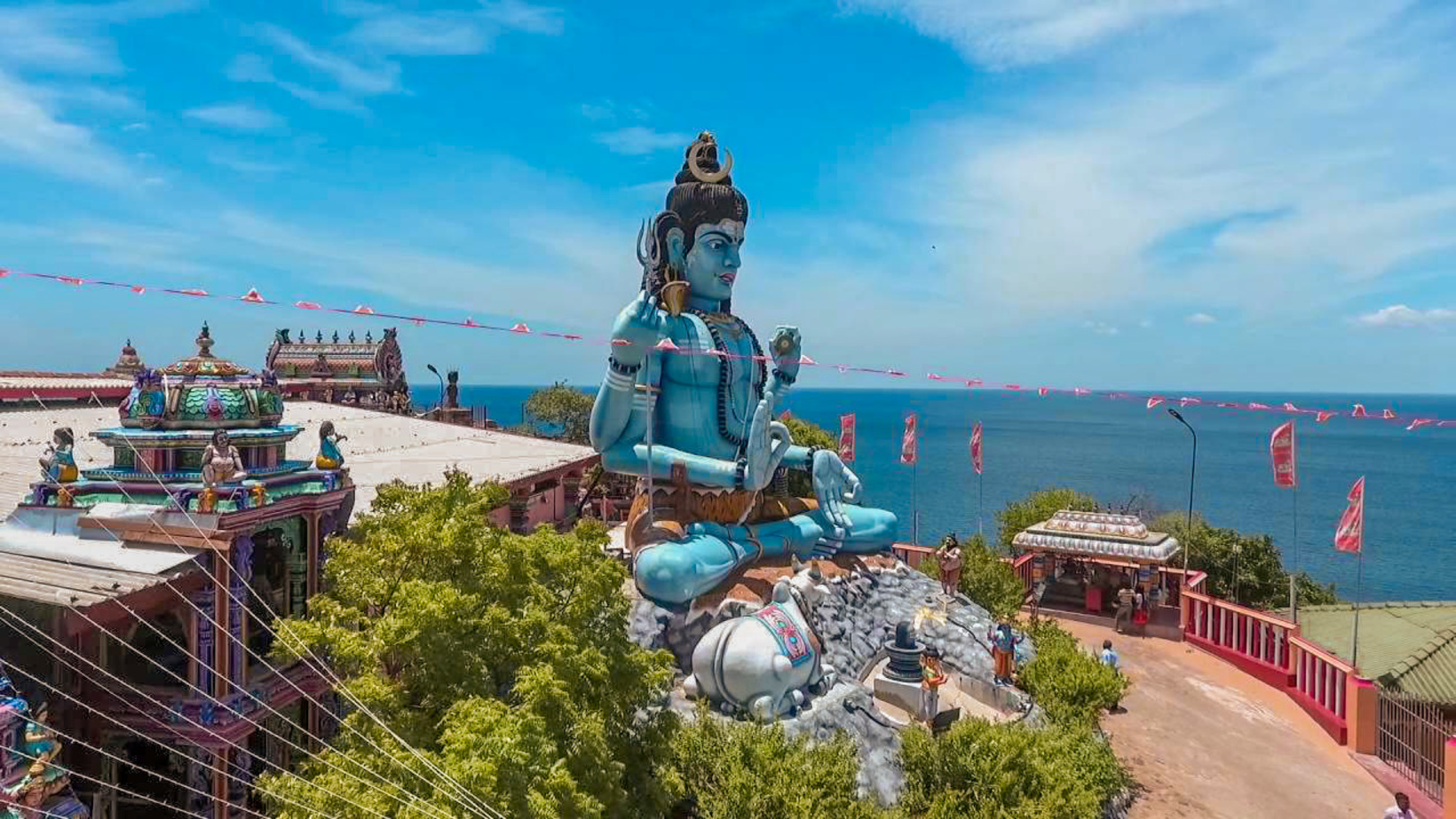 Trincomalee, one of the finest natural deep-water harbours in the world is located 257 km north-east of Colombo, which is considered as the commercial hub of Sri Lanka. Trincomalee is home to the fine beaches of Nilaveli, Uppuveli and the off-shore Pigeon Island. Recently Trincomalee has become popular as a Whale Watching destination as well. The Dive centres at Nilaveli and Uppuveli offer touriststhe opportunity to enjoy their holidays in diving, snorkeling and swimming. The Trincomalee district, referred as Gokanna or Gokarna in the historical chronicles and inscriptions, is studded with a multitude of ruins of ancient Buddhist temples and is considered a major Buddhist cultural and archaeological site of Sri Lanka. The seven hot springs at Kanniya located a mere 8km from Trincomalee attract regular crowds throughout the year in view of the therapeutic properties of the water as well as the varying temperatures from one well to the other.

Gokarna in Trincomalee, Mantota in Mannar and Dambakolapattuna in Jaffna, among others had been great sea ports of ancient Sri Lanka since 543 B.C. Trincomalee known as Gokanna, Gokarna or Siri Gonamala is an ancient sea-port town and as records in the historical chronicles of Sri Lanka states, is the harbour where Prince Panduvasudeva, King Vijya’s nephew sailed into Sri Lanka from Sinhapura, India. “Badda Kachchayana who later became the queen of King Panduwasdeva (505-474 B.C.) with her party of royal maidens too landed in Siri Gonamala harbor. She was a sister of Prince Digha, the founder of Dighavapi.

In an essay entitled, Aryan Settlements and Early Kings, published in the Concise History of Ceylon by Sri Lanka’s foremost historian a pre-eminent archaeologist Dr. Senarath Paranavithana writes about the king who ruled Ceylon (Sri Lanka) after the first king Vijaya “Panduvasdeva with thirty two followers, it is said, arrived in Ceylon in the guise of mendicant monks. They landed at the mouth of the Mahakandara River at the port of Gokanna, the modern Trincomalee according to the commentator of the chronicle (Mahavamsa)”.

E. T. Kannangara, in “Jaffna and the Sinhala Heritage” wrote, Trincomalee during the periods of the Sinhala kings was one of the chief trading centres in Sri Lanka. Sri Gokarna, Siri Gokanna, Sri Gonapura, Siri Gonamala, Gonagamaka Pattana, Gonagama-Patuna, and much earlier Gokannatitta were some of the names attached to this place in the chronicles. The present Sinhala name Thirikunamala is apparently a derivation from Siri Gonamala. The conversion of the name follows the pattern that Sinhala names Somapura, Kokavila, Mampe and Valigama Madakalapuva being converted into Sampur, Kokuvil, Manipay, Valikamam and Mattakalapu.

The conversion of Gokarna between ‘Tirukonamalai’ first appears in a Tamil inscription dated to 10th or 11th century A.D. Buddhist Vihara at Gokanna called Sri Gokarna Vihara built in the reign of King Mahasen (276-303 A.C.) was the earliest religious edifice in Trincomalee. Being on a rock it was also called Vehera Gala (Vihara on a rock). Gokanna Buddhist Vihare Temple was expanded by King Agbo V (718-724 AD) and demolished by the Portuguese to build a fortress in the 16th century. Gokanna Vihare is one of the 74 Buddhist sites identified at Trincomalee district by the Department of Archaeology of Sri Lanka. Swami Rock, the highest point in Fort Frederick is an ancient site where there had been a number of Buddhist shrines.

Some of the other locations are as follows.

Velgam Vehera Buddhist Monastery : TheVelgam Vehera ancient Buddhist Monastery is located 16 km north-west of Trincomalee off the Trincomalee – Horowupothana road. An inscription is found on a rock halfway up the hill on the summit on which are the remains of a stupa belonging during the reign of Batiya Maharaja or King Bhatika Tissa II (circa 149 A.D.). It records the gift of revenue from certain fields to the Abagara Vihare (Abhagiri or Amaragiri Vihare) at Velgama by a General named Abaya. Dr. Paranavithana Reviews that this record proved that the name by which the shrine is addressed was known in the eleventh and twelfth centuries. It was Dr. Paranavithana’s view that the date of the original foundation of the vihare was no doubt considerably earlier than the reign of King Bhatika Tissa II.

Galmetiyawa in the Kinniya AGA’s Division: Below the Galmetiyawa reservoir some four miles off the 102nd mile along the Trincomalee road. A Buddha statue sculptured in marble was found here. Although the statue appeared to have been worn out by the action of flowing water it was beautifully sculptured in the Amaravati style. Around the statue were the remains of ancient buildings. Bricks and pieces of pottery were found lying around.

Ancient site at Kuchchaveli: The torso of a limestone Buddha statue was found at this site. The statue is a beautiful work in the Amaravati style. Pieces of flat tiles and bricks were found in large quantities. It is possible that there was a monastic establishment of the Anuradhapura period located at this site. On a boulder of rock at the foot of a hillock is a sculpture consisting of 16 dagaba presentations. The Buddha statue was transferred to the Archaeological Museum in Trincomalee.

Ancient site at Kantalai: (Tract 13 of Kantalai sugar farm) At this site two broken Buddha statues were found along with its guard stones. There were also pieces of bricks and tiles. The Buddha statue depicted as seated under the nine hooded Muchalinda Naga Raajaya (about four feet in height) has been transferred to the Archaeological Museum in Trincomalee.

Ancient site Mahaweli River Ford in Koddiyar Pattu: Here are the remains of a structure with 42 pillars. On one of these pillars is an inscription.

Ancient site at Etabendiwewa: (on a by-road between 87th and 88th mile post on the Horowupotana—Trincomalee road).There are remains of a dogaba built on a square terrace which has been vandalised. On each of the four sides of the terrace is a flight of steps with plain guard stones and a moonstone. West of the dagoba are the ruins of a building.

Ancient site Pulmodai: About 1 1/2 miles away from the Ilumnite factory is an ancient site where there are a number of caves. In one of the caves is a Brahmi inscription. Close by is a pillared building with the torso of a Buddha statue.

Trincomalee had been home to numerous Buddhist temples and Vihara (Monasteries) since the reign of King Dutugamunu (161-137 BC). The Hero of the nation, King Dutugamunu is believed to have built many viharas and monasteries at Gokanna in the second century B.C. A map prepared in 1982 by M.H.Sirisoma, from the Department of Archaeology listed 276 sites of ‘archaeological interest’ in the northern and eastern provinces.

Triyaya, Weligam Vehera Seruwila Raja Maha Vihara and Kuchchaveli are living Buddhist heritage sites of the Trincomalee district. A Modern Hindu shrine named Koneswaram Kovil was erected in the nineteen forties.” The so called historical kovil was built only recently after dismantling the ancient Buddhist Temple at the same place. There are people who have seen the Buddhist temple in the forties,” Professor Nalin de Silva, 25th July 2003.

The city of Trincomalee had served as a major conduit for Sri Lanka’s seaborne trade during the Anuradhapura and Polonnaruwa kingdoms.

Captain Robert Knox Snr. accompanied by his son Robert Knox, Jnr. set sail by the ‘Anne’ in London on January 21, 1658 on a trading expedition to East Indies under the British East India Company. After a voyage of about one year and nine months, the crew encountered stormy Weather along the Coromandel Coast and Bay of Bengal. With the mast broken and the sails torn,“Anne” landed near Kottiar Bay (estuary of Mahaweli Ganga,) on November 19, 1659. The crew of the ship was invited ashore and was taken captive on the orders from the King Rajasinghe II (1629-1687 A.D.) in Kandy.

Trincomalee during the colonial era

Trincomalee’s strategic location has made it a flash point during the colonial era. Trincomalee’s long military began in 1617 when five Danish ships sailed into Koddiyar Bay under a commander named Ove Giedde. King Rajasinghe the second having a lively appreciation of the Port’s value, Giedde’s negotiations proved fruitless; and he sailed away, leaving one wreck behind. The Portuguese, already having sway in the coastal areas of Sri Lanka, now set themselves upon capturing Trincomalee and in 1624 completed the construction of a fort there.

This fort – it had but three bastions –built by the Portuguese in 1624, was taken by the Dutch in 1639 only to be abandoned soon afterwards. In 1675, the fort was re-fortified and named Fort Frederick after Frederick the Great. It is part of those walls and gate that still stand, as the next focal point of interest in Trincomalee besides the harbor.

E. T. Kannangara, in “Jaffna and the Sinhala Heritage” referring to more recent times says in the treaty between the Sinhala king and the Dutch East India Company signed in 1766 AC Batticaloa is mentioned as Puliyanduwa and Trincomalee as Thirikunamala.

In 1795, a British fleet lay off Trincomalee, ostensibly come to protect the Dutch against the French, but under secret orders to capture Trincomalee at all events, for its growing strategic importance. The bedevilled Dutch, unsure where loyalty or expediency la, hesitated. But Colonel James Stuart, opening a practicable breach in the walls after a four-day bombardment, clinched the matter. And Trincomalee became – England’s first possession in Ceylon. By the British takeover in 1795, the city had changed hands another seven times.

The British and the Allied Powers chose it as the chief naval base for the entire South East of Asia and Far East Command during World War II, The Japanese attack at Trincomalee’s harbour in 1942 wasn’t successful in spite of a suicide attack on the Trincomalee fuel tanks. Sri Lanka, then called Ceylon, did not face a real threat of an invasion by the Japanese at any point during the war.

(SKU: LK60220100) Whale and Dolphin Watching Tour in Trincomalee You will have to wake up early and travel to the Trincomalee Harbour where you will be met by ou...
Book now

(SKU: LK60220200) Deep Sea Fishing in Trincomalee Located on the eastern coastline of Sri Lanka, Trincomalee is one of the most perfect locations for anglers to...
Book now