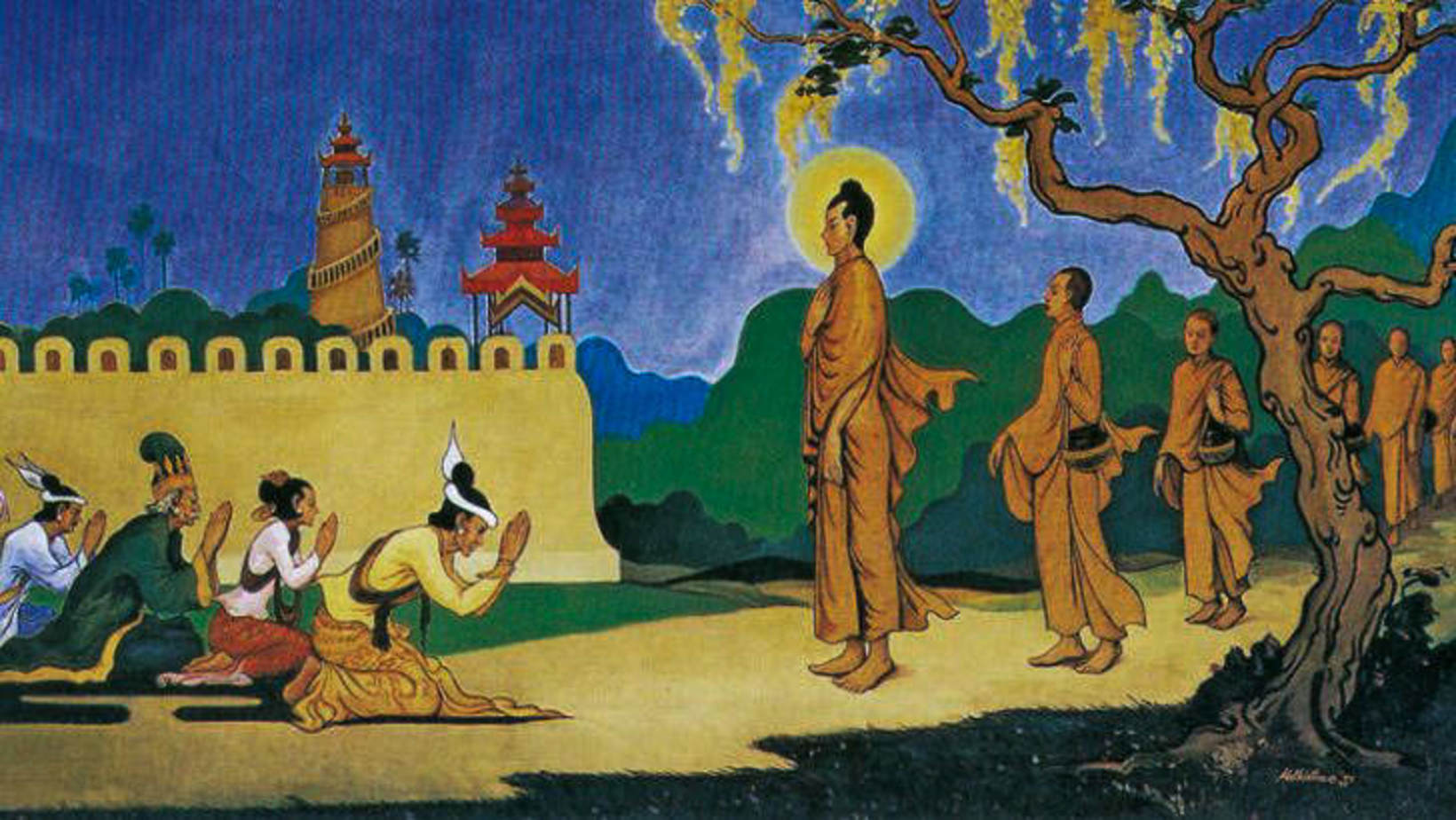 Medin poya is the day when Buddha visited his father King Suddodhana for the first time as the “Samma Sambuddha” (Fully Enlightened One). Medin Poya falls in March.

It was in the seventh year after the enlightenment of Sakyamuni Siddhartha Gautama Buddha that He, together with 20,000 bhikkus set out from Rajagahanuwara to Kapilawasthupura, His birthplace in response to an invitation sent by His father, King Suddodhana. He was visiting his father’s kingdom for the first time as the “Samma Sambuddha” (Fully Enlightened One) and was conducted to the palace by Minister Kaludai whom the King had dispatched to the Veluwana Monastery in Rajagahanuwara where Lord Buddha resided, with instructions to bring back his beloved son. Minister Kaludai was the only successful messenger who was able to accomplish this mission assigned by the King. Previously, nine courtiers, each accompanied by a thousand men had set out on the same mission, but had attained Arahantship and joined the Bhikku order on hearing the Buddha’s preaching. Minister Kaludai was able to convince the Blessed One to return home to visit his dying father, Princess Yasodhara, son Rahula and the many relatives and friends who resided in Kapilawasthupura.

On that Medin Full Moon Poya day many centuries ago, Lord Buddha returned to His birthplace and during that visit many significant events occurred that would be commemorated with reverence in the centuries to follow.

Returning after many years to visit His father, the Buddha was able to preach the Dhamma to King Suddodhana, who listened to this message and attained Sothapanna a few days before he died. Furthermore, Mahapajapathi Gothami, Siddhartha Gauthama’s stepmother too wished to join the order of the Sangha on hearing the lectures delivered by Him. As a female she was prevented from doing so as there were no ordained female bhikkus at the time. She however, followed the Buddha back to where he resided and was finally allowed into the order, and ordained along with hundreds of other female devotees as the first Bhikkuni. Mahapajapathi Gothami occupies an important place in the life of the Buddha. She was his mother’s younger sister and became his foster mother and thereafter his stepmother after the death of His own mother, Queen Maha Maya seven days after His birth.

Princess Yasodhara, wife of Siddhartha Gautama too became a follower of the Dhamma teachings on hearing his lectures, even though she had suffered tremendous grief for seven years at his departure. Furthermore it was during this visit that His only son Rahula was, at age seven, ordained as the first Samanera or novice monk. However this happened without the consent of Rahula’s mother or grandfather, King Suddodhana, who on hearing of the ordination requested the Buddha to ordain a minor only with the blessings of his parents or guardian. The Buddha acceded to this request. Subsequently Rahula attained Arahantship and remained one of the Buddha’s followers.

Another member of the royal famiy Prince Nanda, stepbrother of Lord Buddha had wed the beautiful Janapada Kalyani, but renounced these worldly desires to become a follower of the Dhamma.

For Sri Lanka it is a national holiday, and Buddhists all over the country flock to Temples with offerings of flowers to meditate and listen to the Dhamma teachings. Business too is almost at a standstill as the country commemorates the special events in the life of Lord Buddha which make this day significant.

Buddhists in Sri Lanka today mark this historic event with respect for the tremendous impact the Dhamma brought to bear on these individuals, and absorb the preaching of prelates in the beautiful Temples around the island. Whether it is a Poya day or any other day, such noble religious beliefs are what the people of this island live by.