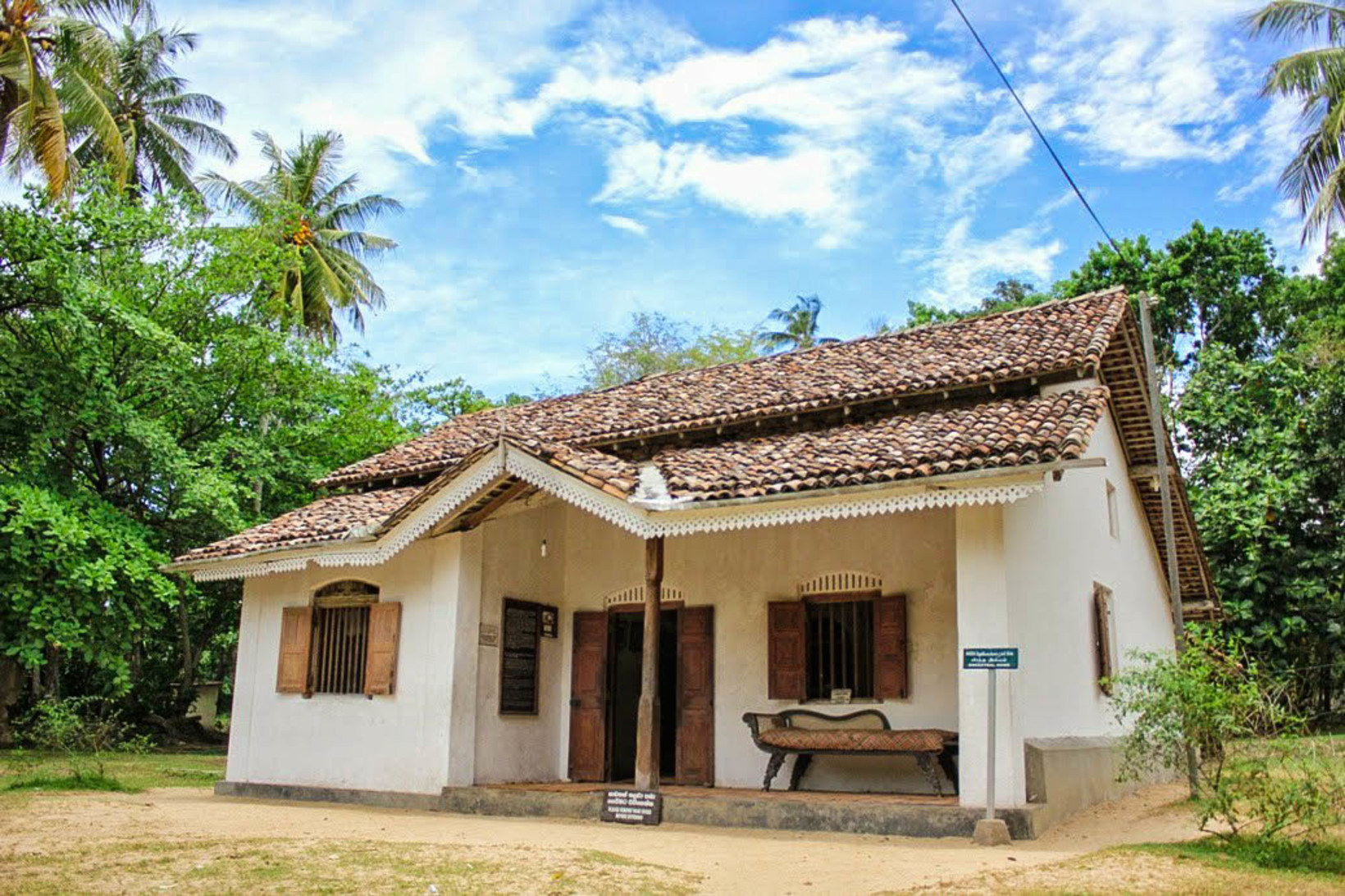 The writer Lama Hewage Don Martin Wickramasinghe, popularly known as Martin Wickramasinghe, was born on the 29th of May 1890 in the village of Malagama (in the area of Koggala) near Galle.. The area lay between a reef on the coastal end and a swampy lagoon where the tributaries of Koggala River drained into. The lagoon had many mangrove forests along the shores, and was studded with delightful islands to explore. It was a place filled with nature and adventure, a place that was perfect for a growing boy and his sisters. His  childhood environment definitely played a huge role on his future writing.

When Martin was 5 years old, he was taught to read and write Sinhala by the village monk. He was very quick at picking it up, and therefore the monk also taught him the alphabet of the ancient manuscript language Devanagari. This allowed him to read the Buddhist manuscript of Hitopadesa. While it is unknown whether Martin truly understood it at that young age, he did also manage to memorize and quote several long sections out of the manuscript.

Taking note of his genius language abilities, the monk had him sent to a nearby vernacular school. He gained expertise in the Sinhala language during the two years that he studied there. Later in 1897, he was sent to learn English at school named Buono Vista in Gallle. Two years later Martin became fluent in not only English, but also Latin.

But the growth was not to last. Shortly after little Martin’s father passed away. The family faced financial difficulties. Martin had to give up on studying at Buono Vista, and reenroll  at local vernacular school in Ahangama. But there were so many problems at home and nobody to encourage and listen to Martin. He had lost his biggest support with the death of his father. The sudden change, almost drop, in environment was not very good for little Martin either. Soon he lost interest in school and studies, and stopped going.

Several years passed. During this period, Martin became a child who wandered around the swamps and wilderness around his village, together with a gang of other village boys. He enjoyed exploring the unknown depths of the swamps and lived the fun life of an adventurer. This period became key to his mindset and formed a base for many of his future stories.

In 1914, at the age of 24, Martin formally began his career as a writer. His maiden work was the was the novel ‘Leela’. He went on to write several other novels, prose and essays until the 1940s, when he became a literary critic in conjunction with being a creative writer. His works were mainly in Sinhala. Martin Wickramasinghe is famous for authoring the trilogy with the books Gamperaliya, Yuganthaya, and Kaliyugaya in the 1940s and 1950s. The story is of a successful family in a Southern village who experiences the gradual replacement of traditional economic and social structure in the village by commercial city influence. The books were used for  film by the renowned Sri Lankan director Dr. Lester James Peires.

Martin’s most heralded work was Viragaya written in 1956. Its significant theme and sophisticate technique made it popular as the greatest work of Sinhalese fiction. It follows the spiritual problems of a fragile Sinhalese youth raised in a traditional Buddhist home after being confronted the shades of adulthood and the responsibilities that come with it, while also having to face the complexities caused by the modernization of society. Written as a first-person narrative, it puts forth the autobiographical story of the antagonist in sparkling vignettes, rather than in chronological order. The writing style that Martin Wickramasinghe displayed in the novel served as origin to a spate of imitators, but very few managed to capture the essence of the style.

Towards the l950s and early 60s Martin was involved in a Sinhalese poetry movement known as Peradeniya School. He wrote the book of poetry known as Teri Gi during this period. However, he later had an argument with the members of the movement due to belief that the other poets did not follow traditional literary values and copied, what he called, “decadent” western and post-war Japanese literature. This caused the huge conflict among the movement and ended in their dissolution.

As his last major piece of writing, Martin Wickramasinghe wrote a modernized biography of Lord Buddha titled Bava Taranaya. It attained much recognition among Buddhist circles. Martin passed away on the 23rd July 1976 at the ripe age of 86. Martin Wickramasinghe won several national and international awards as a writer, Several of his books, such as Madol Doowa and Viragaya, were translated into a number of other languages.

When passing by the Galle or Aluthgama areas, on the southern coast of Sri Lanka, you can easily get directions to the Martin Wickramasinghe Folk Museum. Visiting it is a delightful low cost venture that will give better understanding into tropical Sri Lanka’s olden day cultures and traditions.

The Museum is located near the Koggala Free Trade Zone, alongside the Galle-Matara Main Road. As such it is easily reachable. The Museum is open from 9:00 am to 5:00 pm daily, and tickets are priced at a standard rate of Rs 200. The Museum is in the family home of the author, which has an age close to 200 years. The cottage has quite a history in itself, having been one of the few houses to survive the Second World War.

The History Behind the House

As the story goes, the entire village, that was located around the house, was taken over by the Royal Air Force during the war. Residents were given just 24 hours to vacate the area. Most homes were then destroyed to make space for an airstrip. Martin Wickramasinghe’s home was slated for destruction too. However, as it was not in the middle of the airfield planned, and due to its simple but sturdy structure, it caught the eye of a high-ranking female Air Force Officer. She stopped the destruction of the home and made it her personal quarters for the period of the war.

The airfield played an important role in the war when a Catalina Aircraft launched from the airstrip was the one to first alert the British Forces of a fleet of Japanese Zero Fighters on the way do an air raid on Ceylon. Leonard Birchall who raised the radio alarm on the 4th February 1942, was shot down and he and his team taken prisoners by the Japanese. Despite the warning, the British did not respond properly to the air raid and raise an alarm among civilians – assuming it to be a prank – and caused the loss of almost 100 civilian lives. However, the Navy did take note and move their ships out of the Colombo harbor, avoiding the event of another Pearl Harbor Raid. Birchall , who raised the alarm, survived the war and became decorated and hailed as the ‘Savior of Ceylon’.

The grassy mound to the right of the cottage bears the ashes of the author Martin Wickremasinghe and his wife Prema. Within the house itself is a ‘Hall of Life’. The home chronicles the story of Martins life through a series of photographs, antique furniture, souvenirs, awards and other memorabilia. Clear descriptions and/or name boards in both English and Sinhala explain the importance of each display object. Take note of the writer’s desk with its spindly antique chair and many cubbyholes.

Behind the cottage are some other structures. One is an old traditional rice storage hut made of mud and wattle, and raised on stilts to avoid pests. You can peek inside. The other larger structure is the Folk Museum.

While he was alive Martin Wickramasinghe has the dream of creating a folk museum to display Sri Lanka’s culture and traditions. He collected a large number of curios and stored them in this building. After his death, the Martin Wickramasinghe Trust made his dream a reality by not only displaying the curios that he collected, but also adding to his collection.

Today you can see a variety of objects such as olden day traditional clay pots and pans, grinding stones, iron smelting furnaces that make use of the winds of the yearly monsoons, old wooden bullock carts and elephant carts with dry woven palm roofs, horse carriages and rickshaws, puppets, masks, metal craft artifacts, fishing artifacts, traditional musical instruments and dance costumes, and much more form a mishmash of strange and interesting objects that capture your eyes wherever you look. The museum also sells a collection of Martin Wickramasinghe’s books in several languages. So you can purchase them if you want to try reading them.

The gardens around the house are an attraction too. The 7 acre plot of land grows wild with a carefully restored ecosystem of hundreds of indigenous trees and shrubs. This haven plays home to s variety of birds and small animals. So it’s a delightful place to take a walk in.

In summary, the Martin Wickramasinghe Folk Museum is a place with much to see. So don’t forget to take your cameras for some awesome photographic memories. 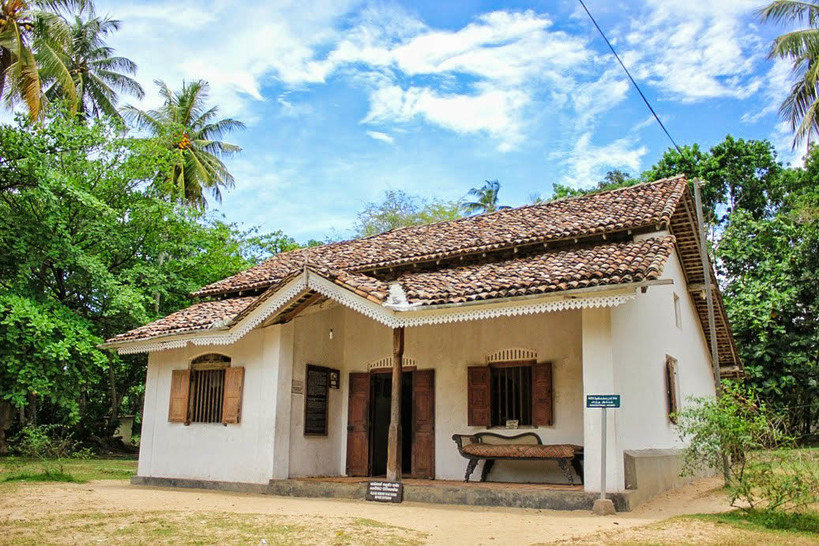 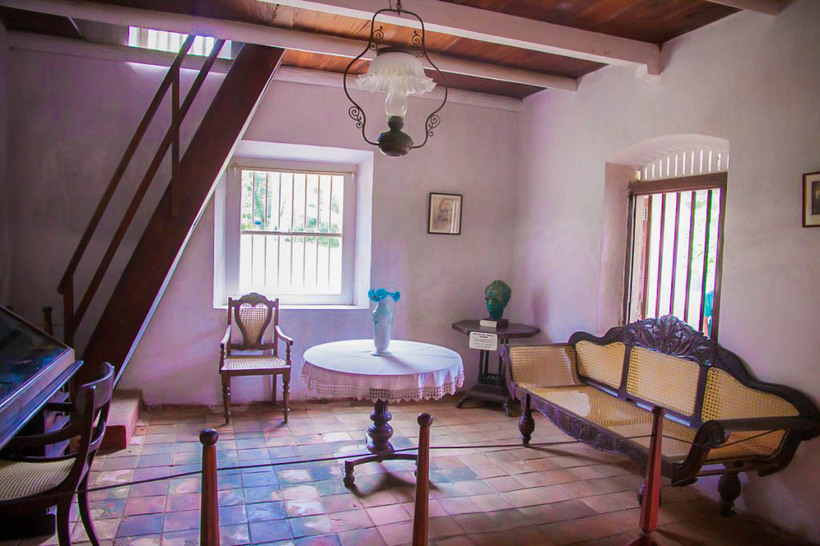 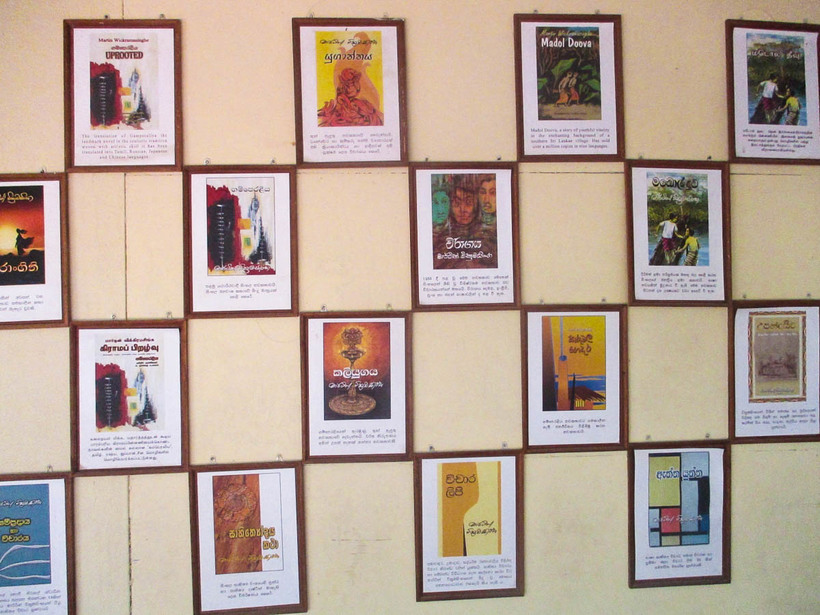 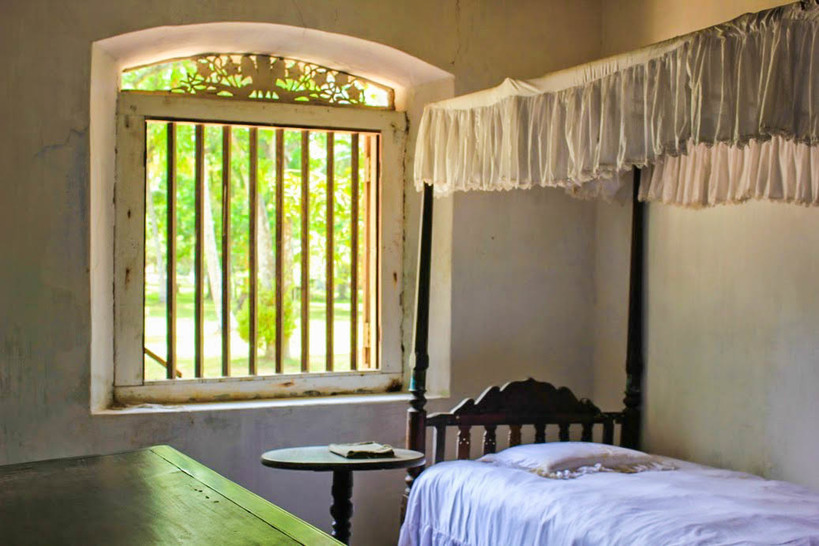 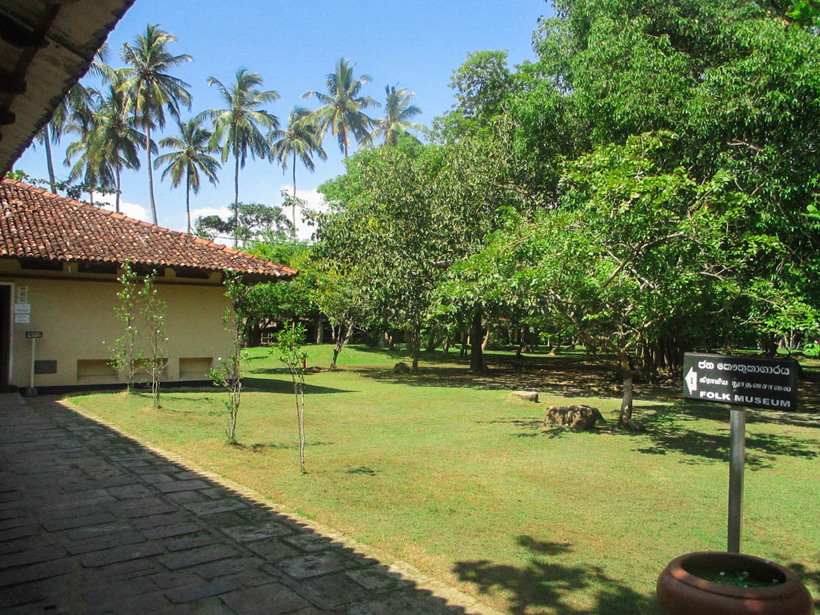 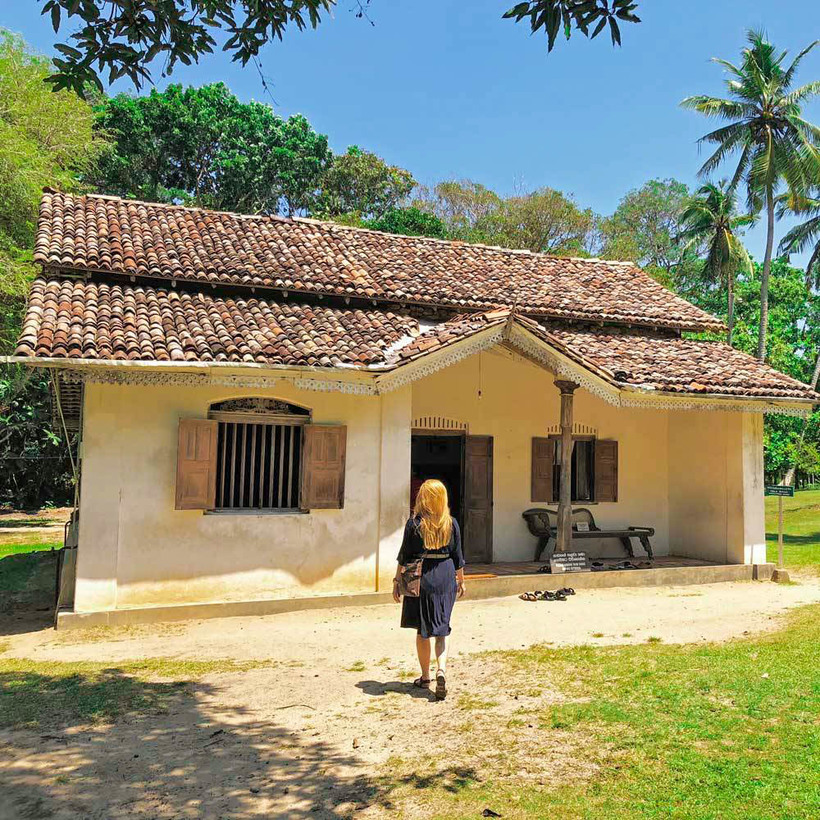