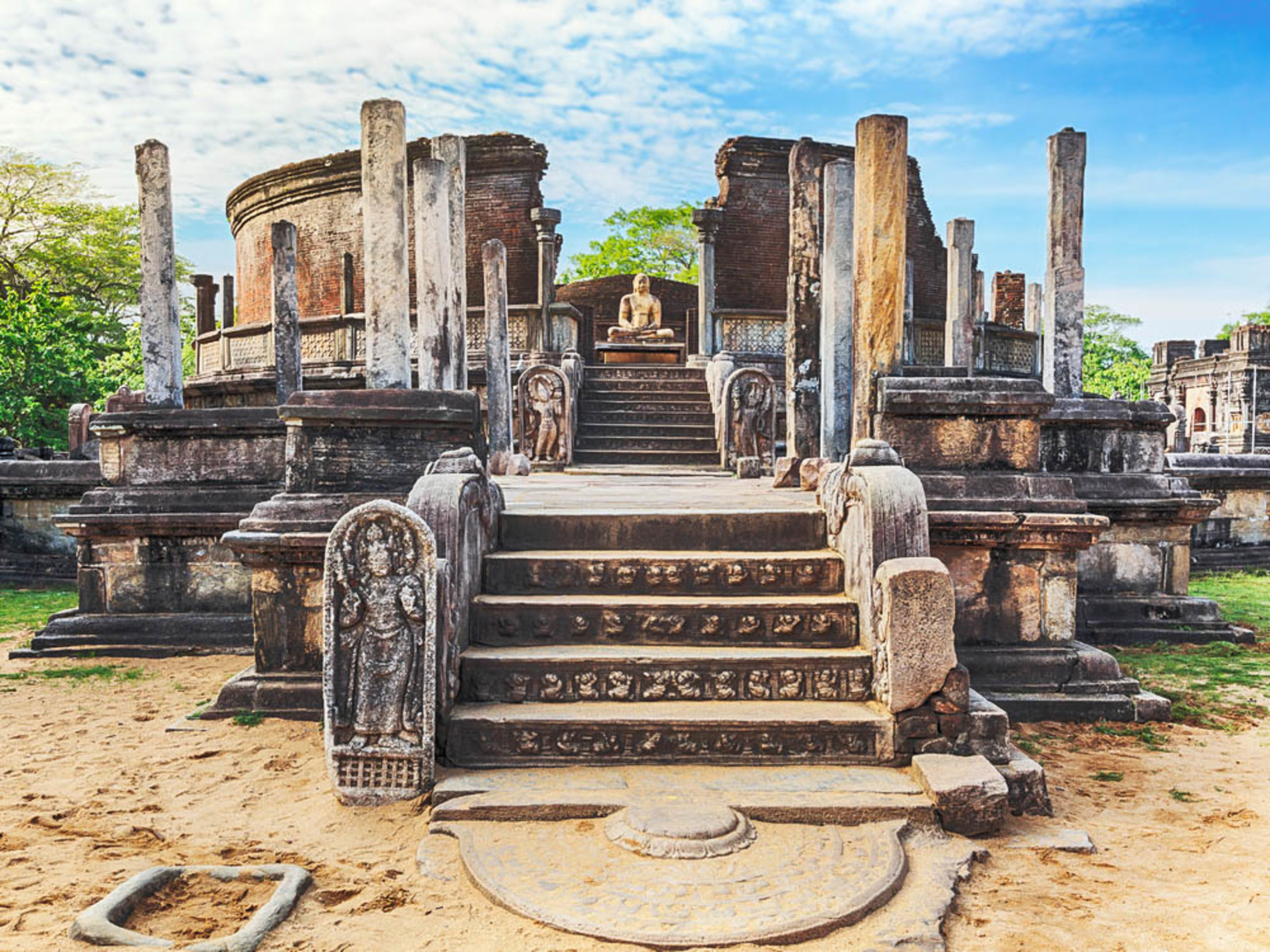 This pyramid-shaped, seven storied building called Satis thought to be an unusually shaped stupa built during the Polonnaruwa Period (11th -13th century). It is said that similar Stupa’s can be seen in Cambodia and in Siam.

Sri Lanka has two large monsoon seasons, each lasting about three months. The rest of year remains dry and hot, except for a few short heat induced thunderstorms at night.

The North Central Plains of Sri Lanka which belongs to the dry zone of the island is mainly covered in thick shrubbery forests and isolated mountainous outcrops which are surrounded by flat land.

According to inscriptions found in the caves which honeycomb the base of the rock fortress, Sigiriya served as a place of religious retreat as far back as the third century BC, when Buddhist monks established refuge in the locale. It wasn’t until the fifth century AD, however, that Sigiriya rose briefly to supremacy in Sri Lanka, following the power struggle which succeeded the reign of Dhatusena (455-473) of Anuradhapura.

Sri Lanka is one of Asia?s richest treasure troves of both natural and man-made wonders. Royal and sacred cities, colonial strongholds, temple caves and virgin forests with no fewer than seven World Heritage Sites in Sri Lanka declared and listed by UNESCO.

Museums in Sri Lanka offer a rich insight in to the history and evolution of Sri Lanka as one of the most distinctive countries in the world. As in any other place in the world, one gets to know all about the past of a country through the exhibits housed in the museums.

Moonstones and guard stones are being considered as some of the most important sculptures among the classical Sinhalese sculptures. Some of them rated among the world’s best artistic achievements.

Galle Fort, in the Bay of Galle on the southwest coast of Sri Lanka, was built first in 1588 by the Portuguese, then extensively fortified by the Dutch during the 17th century from 1649 onwards

Mask making is a popular tradition in Sri Lanka. Many Sri Lankan mask artisans ply their trade along the Western, South Western and Southern coasts of the island. Of these, the Ambalangoda area on the South Western coast of Sri Lanka is renowned for its talented artisans.

Old Colombo Lighthouse or Colombo Fort Clock Tower is a clock tower and was a lighthouse in Colombo. The lighthouse is no longer operational, but the tower remains and functions as a clock tower. It is located at the junction of Chatham Street and Janadhipathi Mawatha (formerly Queens Road) in Colombo fort.

The Port of Colombo (known as Port of Kolomtota during the early 14th Century Kotte Kingdom) is the largest and busiest port in Sri Lanka as well as in South Asia.

The National Museum of Kandy in Kandy, Sri Lanka is located next to the Temple of the Tooth in part of the former Royal Palace of Kandy. The primary exhibits are housed in the Palle Vahala building, which was the former home of the King’s harem.

From the hustle and bustle of the City of Colombo, the commercial hub of the island you are now in the national Capital Sri Jayawardenepura, Kotte, once the seat of the kings and the centre of poets and artistes.

The Old Parliament Building, is the building that houses the Presidential Secretariat of Sri Lanka. Situated in the Colombo fort facing the sea, it is in close proximity to the President’s House, Colombo.

The Prison of the Last King of Ceylon

The prison cell of the last king of Sri Lanka, is one of the unnoticed historic monument located at the heart of Colombo. Many of you have passed this location, without noticing the historic value of this small structure, which is currently in middle of the car park in Colombo Ceylinco Headquarters premises.

Lunuganga Estate was the country home of the renowned Sri Lankan architect Geoffrey Bawa. Started in 1947, the garden led Bawa, a lawyer called to the Bar at the Inner Temple in 1940, to decide to become an architect. As he went on to become Sri Lanka‘s and one of Asia’s most prolific and influential architects, the garden at the Lunuganga estate remained his first muse and experimental laboratory for new ideas.

The Nuwara Eliya Post Office is located in the centre of Nuwara Eliya and is one of the oldest post offices in Sri Lanka.

Udugampola is a small town in the Gampaha District of Sri Lanka and was a sub kingdom during reign of the King Sakala Kala Wallabha of Kotte Era.

One of my dreams has been to climb a lighthouse and enjoy the sunset from the tower. This dream came true during a lighthouse tour of Sri Lanka.

Fa Hien Cave, also Pahiyangala Cave is situated in the district of Kalutara, Western Province, Sri Lanka and according to a rural legend, named after an alleged resident during historical times, namely Buddhist monk Faxian (also Fa-Hien, or Fa Hsien).

Richmond Castle is a Edwardian mansion, located near Kalutara. Built between 1900 and 1910, it was formally the country seat of Mudaliyar Don Arthur de Silva Wijesinghe Siriwardena (1889–1947).

Fort railway station is a major rail hub in Colombo, Sri Lanka. The station is served by Sri Lanka Railways, with many inter-city and commuter trains entering each day.

Central Point. The Central Point is a completely refurbished building behind Dutch Hospital, run by the Central Bank. It’s a beautiful space which…

Gem Museum. What is the Crown Jewel Philosophy? It is our pledge to deliver products of impeccable quality and unmatched value through ethical business…

Traditional Puppet Art Museum. The ‘rukada’ figures have been handcrafted by traditional puppet artists with remarkable attention to detail.

Historical Mansion. More of an antique store than a museum, this Fort townhouse (which dates back to the Dutch days) contains the private collection…

Black Fort Galle. Black Fort, also called Zwart Fort, which can be reached after walking along the Galle fort wall is the oldest built bastion…

Raja Museum. Raja, the great tusker, which carried the Sacred Relic Casket for more than half a century, is honoured by the Dalada Maligawa by preserving…

Balana Fort. Balana fort was built by the Kingdom of Kandy near Alagalla Mountain Range, Sri Lanka. The fort was functioned as a strategic rock fortress…

Dolmen of Padavigampola. About four miles to the north of Rambukkana, in the heart of a village on the plain beside a plantation of jak, is a curious…

Mologoda Pottery Village. Believed to be one of the oldest pottery villages in the country whose history, according to folklore, runs back to the…

Fort Fredrick. Fort Fredrick, also known as Trincomalee Fort or Fort of Triquillimale, is a fort built by the Portuguese at Trincomalee, Eastern Province…

Demodara Railway Station. Demodara railway station is the third last station on the Main Line, and is 277.71 km (172.56 mi) away from Colombo…

Cargills Square. Cargills Square is a shopping mall in the city of Jaffna in northern Sri Lanka. The mall is located in the heart of the city…

Isurumuniya. Isurumuniya is a Buddhist temple situated near to the Tissa Wewa (Tisa tank) in Anuradhapura, Sri Lanka. There are four carvings of special…

Kuttam Pokuna. One of the best specimen of bathing tanks or pools in ancient Sri Lanka is the pair of pools known as Kuttam Pokuna (Twin Ponds/Pools)…

Ranmasu Uyana. Ranmasu Uyana is a park in Sri Lanka. It sits on approximately 40 acres (16 ha), and is a noted example of Sri Lankan garden architecture…

Galle Harbour. Galle Harbour is a natural harbour, located in Galle, on the south-western coast of Sri Lanka. Currently Galle port serves as one…

Magampura Mahinda Rajapaksa Port. The Hambantota Port (also known as the Port of Hambantota) is a maritime port in Hambantota, Sri Lanka…

Thivanka Image House. If you are looking for ancient art in Polonnaruwa I suggest you take a drive to the Tivanka Pilimage or the Tivanka…

Gal Potha. Gal Potha (Stone Book) is one of the famous works of King Nissanka Malla (1187-1196) which describes himself, his rule and the eligibility…

Kandyan Art Association & Cultural Centre. This is the busiest dance-show venue and in high season it can be overwhelmingly crammed with tour groups… 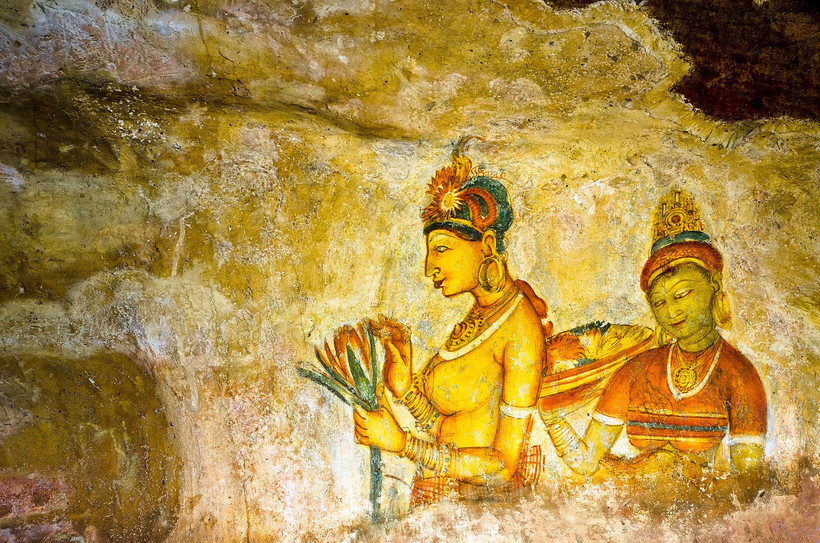 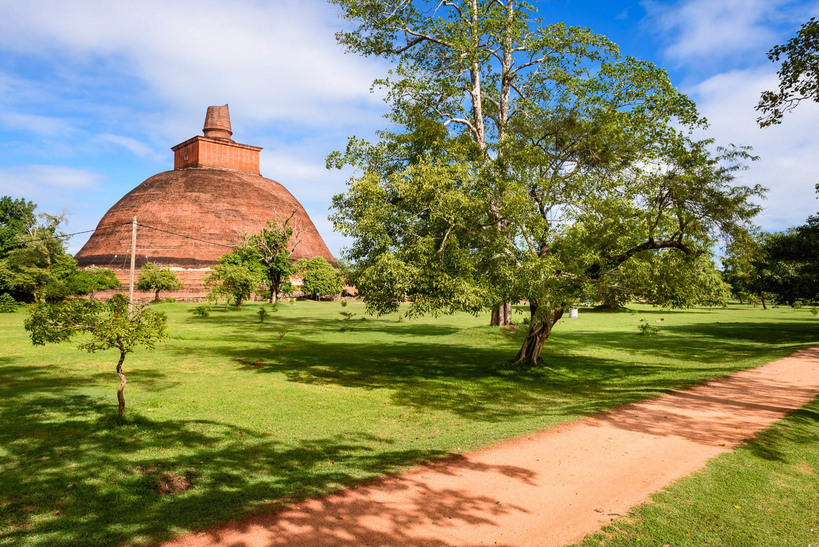 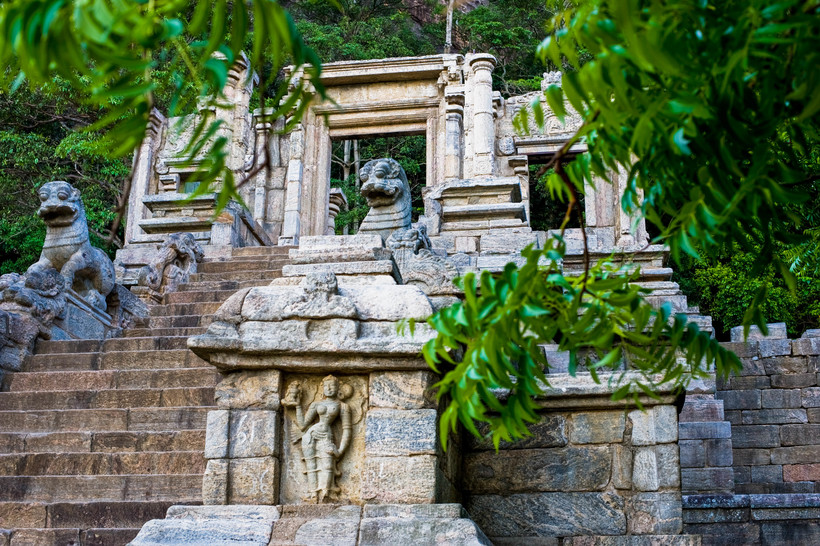 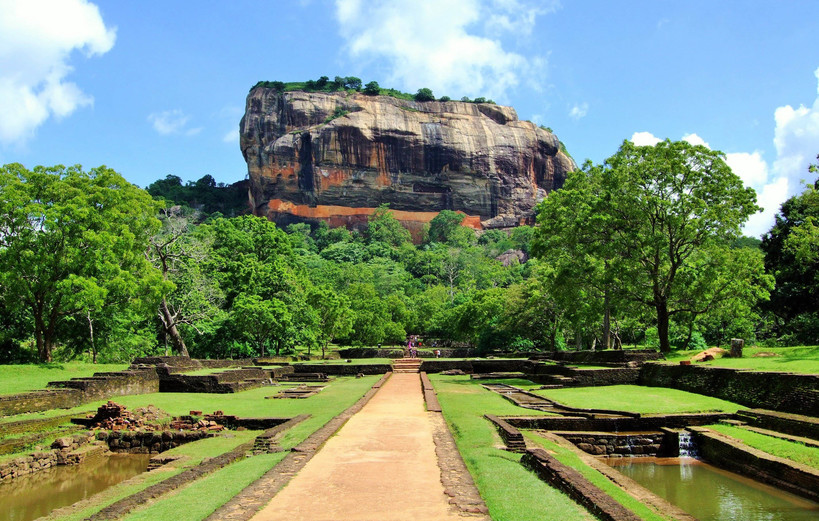 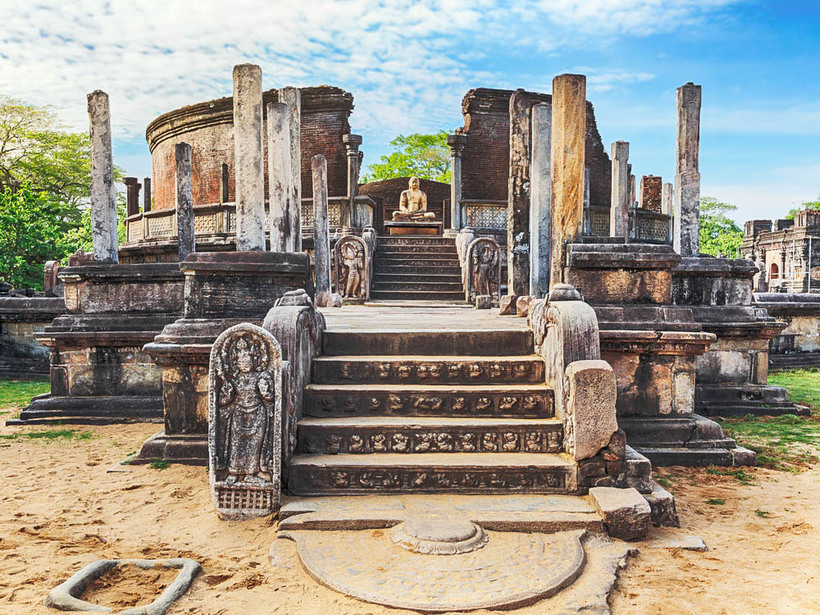 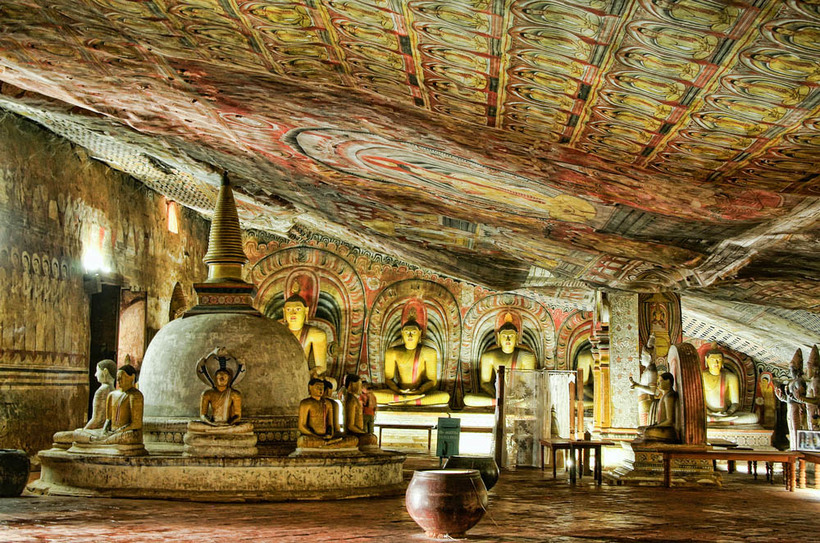