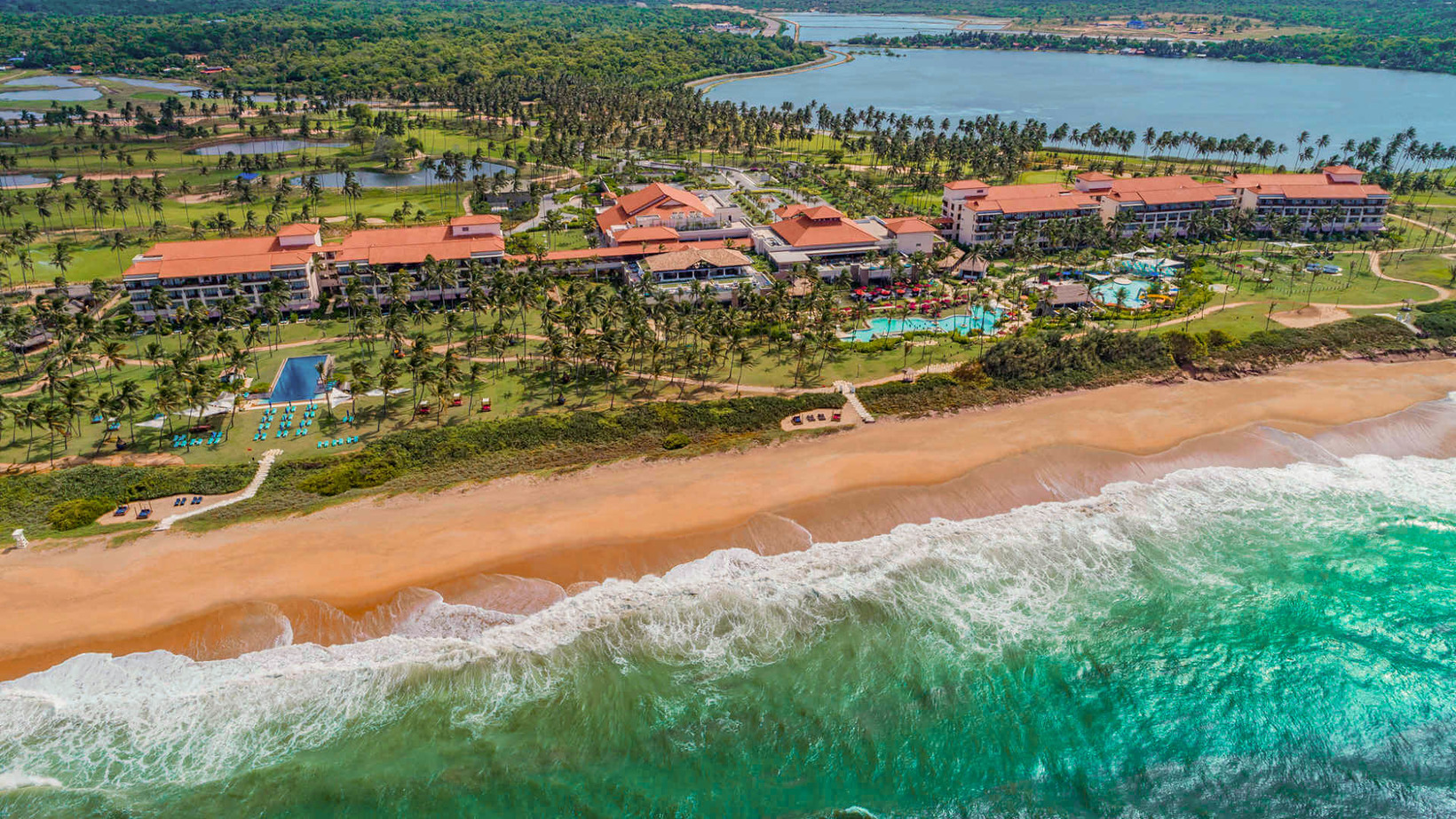 Hambantota city is located 241km (along A2 coastal motor way) south of Colombo in Hambantota district of the Southern Province of Sri Lanka.

Hambantota can be reached by scenic A2 coastal motor way (241km) from Colombo as well as by A8 motor way and A18 (221km) motor way travelling through the country side.

With the opening of Southern Expressway running from Kottawa to Matara, Hambantota is reached in a much shorter period of time though the total distance is still at 242km, i.e. Colombo to Matara (152km) and Matara-Hambantota (91km along A2 coastal road).

ed Southern Expressway running from Kottawa to southern coastal town of Matara (126km) is proposed to be extended to Hambantota.

Though, as at present, Hambantaota cannot be reached by Railway, the matter is taking a turn now. The ongoing construction of Matara-Kataragama Railway Line running a distance of 114.5km began in April 2010 is set to connect Hambantota.

The key objectives within the GHDP are: Magampura Mahinda Rajapakse Sea Port

The island of Sri Lanka located at the southern tip of Indian subcontinent has no land whatsoever to the south of it till the Indian ocean meets the ever desert ever frozen continent of Antarctica. The location of Sri Lanka, thus lies in the key shipping route between the Malacca Straits and the Suez Canal, which links Asia and Europe.

Colombo, the main port of Sri Lanka being too small to grab the opportunity to service a significant part of the estimated 36,000 ships, including 4,500 oil tankers, that use the sea-route annually, a new harbor was opened in Hambantota in the year 2010. However, the newly opened Magampura Mahinda Rajapakse Sea Port found a stumbling block in the form of bedrock at a depth of 7 meters where the depth of the harbor basin (55.5 ha.) and channel (32.1 ha.), was planned to be of 17 meters. As a result the first phase of the project is yet to be completed while the second phase is yet to be launched.

It will also serve as the secondary hubs for Sri Lankan Airlines and Mihin Lanka. It was initially planned to build an international airport serving the south of Sri Lanka at Weerawila, but the plans were scrapped due to environmental concerns. The site was then moved to Mattala, a small town 15 km north

of Hambantota. Construction on the $209 million first phase of the airport began in November 2009; it will be opened on 18 March 2013.

The new international airport is expected to expand the local aviation industry whilst being a catalyst for the country’s economic development enabling international trade, tourism, vocational training and employment. It is being implemented as an eco-friendly project. The airport is estimated to cost US $210 million and, by the end of construction, will cover 2,000 hectares. It is being built to be compatible with the latest Airbus A380 aircraft and has been designed according to recommendations of the International Civil Aviation Organization.

The airport is designed to facilitate for over 800 foreign passengers at peak hours and several local passengers per every 1000 km² inside the buildings. It will be made to support air-sea cargo transshipment in conjunction with the nearby Hambantota Port, which is about 15 miles away, and would act as an alternative to the Bandaranaike International Airport (BIA) from the date of its completion in 2011. The Chinese government is providing financial assistance for the project.

The airport is being constructed by the China Harbour Engineering Company. Upon completion, the airport will be operated by Airport and Aviation Services (Sri Lanka) Ltd. The runway, apron and taxiways were fully constructed by the end of February 2012. Inaugural test flight landed in the airport at 12.38 p.m. on 16 October 2012.

Sri Lanka’s first Dry Zone Botanical Garden is being established at the village of Mirijjawila on Colombo-Kataragama main road with six main objectives: conservation of dwindling trees and shrubs in the dry zone and arid zone; studies on lesser known and under utilized plants in the dry zone; in dry zone landscape improvement; promoting cultivation of medicinal herbal plants; imparting education and training on botany and horticulture to the younger generation; eco tourism promotion. The irrigation of the garden is supported by the nearby Beragama irrigation reservoir. The plans have been made to construct several small tanks within the Gardens too. Spreading over an extent of 300 acres, Mirijjawila Botanical Garden also features ornamental flower cultivation, commercial flower cultivation and facilities to undertake studies on trees.

Hambantota is home to the main salt pans of Sri Lanka. The coastal line of Hambantota is dominated by shimmering expansive saltpans that stretch along bordering the main road for about 15km. Salt is produced by means of allowing the sea water into the pans called Lewayas that makes the seawater evaporates leaving only salt to be scraped up and collected. The salt pans attract a large number of waders and shore birds, including greater flamingo, spot-billed pelican, several species of plover and tern, gulls, ducks, egrets, sandpipers and many others.

The Wind Energy Resource Atlas of Sri Lanka compiled by the National Renewable Energy Laboratory (NREL) of the United Sates confers that Sri Lanka has a wind resource potential of 24,000 Mega Watts (MW). However, it was concluded that only 200 MW can be actually utilized within system operation limitations. As at present Sri Lanka make use of only 3 MW of this enormous potential, by means of Hambantota Wind Farm of the Ceylon Electricity Board that spans over 17 hectares of woodlands. The wind farm with a total installed capacity of 3 MW generates up to 4,500 MWh of power annually. The wind power station consists of five NEG Micon M1500-600 wind turbines of 600 KW each.