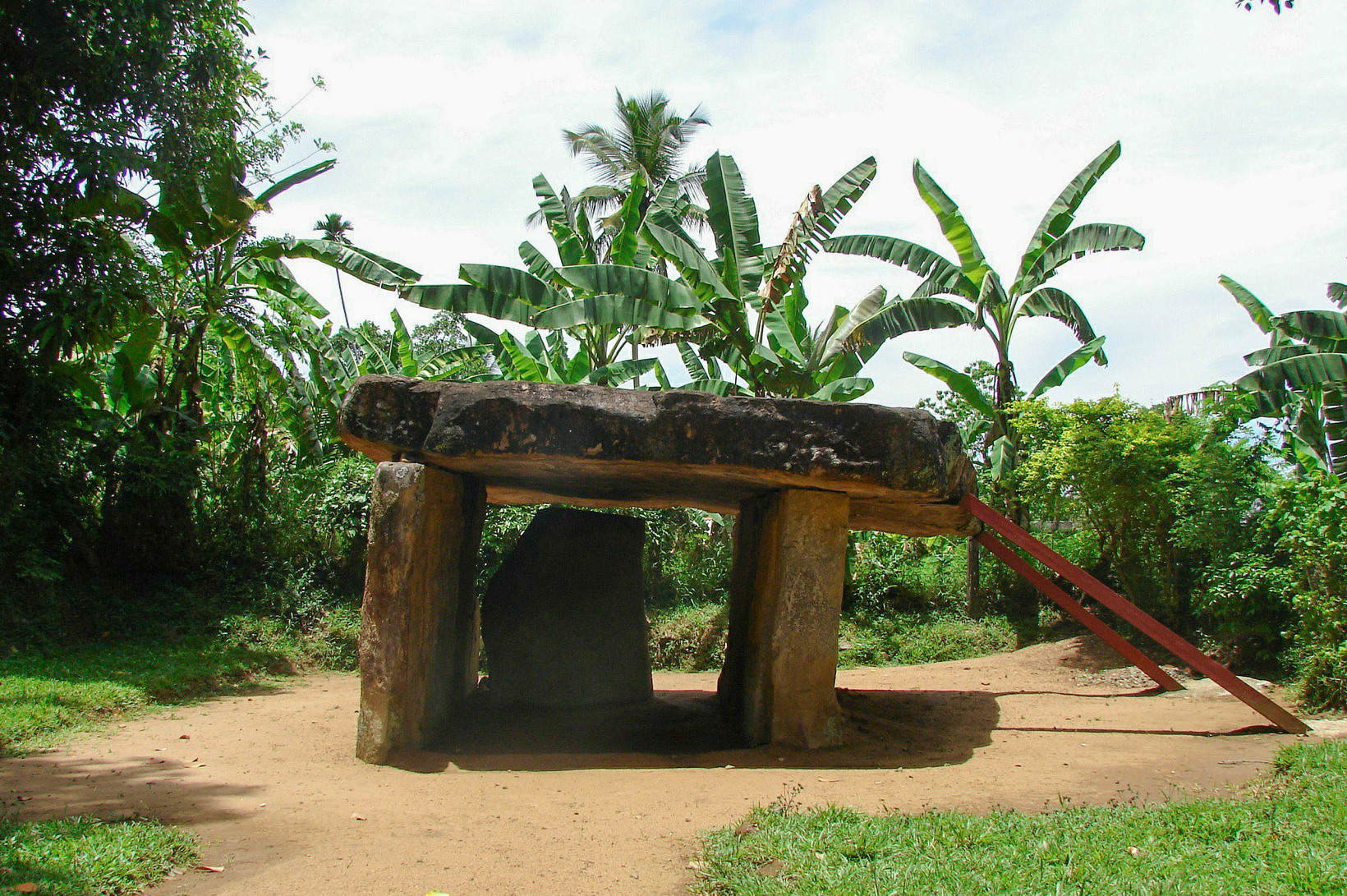 A hamlet in the heart of rural Rambukkana, surrounded by paddy fields and huts, flanked by low hills and rivulets, little known to the outside world, and taken for granted by the locals- Padavigampola, at first glance, may seem like an ordinary hamlet, displaying no visible sign of being an important centre on the historical and cultural map of Sri Lanka.

I felt it was worth making the trip to this unusual and obscure place. As we neared Padavigampola, located close to the Padavigampola School which can be reached by travelling approximately 1.5 kms from Dehen Pauwa junction, itself four kms on the Rambukkana-Walgama road, I realized it was not really a road less known or travelled. Padavigampola is famous for its ancient tomb-like rock structure or dolmen, belonging to the Stone Age.

History has always fascinated me, and, therefore, we were game for a little bit of walking to unravel the story that literally dates back to the Stone Age. Eventually, we discovered the place. We walked on till we spotted a stone chamber. Our excitement grew at the thought of coming face to face with history.

Before proceeding to the dolmen we saw a huge signboard erected toward the tar road proclaiming “Purana Sri Maliyadeva Galmessa Viharaya-Padavigampola” flanked by a massive age-old Bo tree. A few yards away from this is a freshly whitewashed temple, an abode to a pious Buddhist Bhikku, Ven. Alapitiye Pannasara Thera (58), who lives in this temple just outside the dolmen.

Almost hidden in the site, if any visitor comes to visit this dolmen, he or she should cross the temple premises to get a better view of this stone marvel and he or she cannot avoid meeting the Bhikku of the temple. We came across a huge dolmen, belonging to the Megalithic Age. Believed to be built by Neolithic tribesmen, this dolmen is called ‘Galmessa’ by the locals.

Made of three vertical stone slabs and covered by a fourth one called the cap stone, this dolmen was probably a burial chamber in ancient times. Among the pre-historic sites identified in the Sathara Korale, Alulena, Dorawaka and Padavigampola are the most prominent.

The historically important Padavigampola dolmen (Galmessa) is believed to be one of the most significant historical monuments among a number of archaeological artifacts scattered over the Kegalle district in the Sabaragamuwa Province. The dolmen is believed to be a construction done prior to the arrival of Prince Vijaya circa 5th century BC.

According to ancient chronicles, this period is known as the early Iron Age. Hunting was an important part of the daily life of the inhabitants, and they lived in the villages. Agriculture also became a major part in the life of the villagers who built small tanks to irrigate their fields. They buried their dead in stone cemeteries.

The dead were interred in pits or urns and stone monuments erected over their remains. Places such as, Ibbankatuwa in Dambulla and Ranchamadama in Embilipitiya are fine examples, where the dead were cremated and their remains placed inside small stone chambers fitted with capstones as cremations and urn burials were clearly a common practice by this time. This was a culture rich enough and sophisticated enough to erect stone tombs and cairns over the graves of their chieftains. It is in this context that we should view the massive dolmen at Padavigampola where three huge slabs of stone stand upright on the ground. Over the top lies another enormous slab over two feet in height, larger than the rest. This Iron Age society has evolved into a sophisticated urban civilization a few hundred years later.

Since there is no proper excavation of the Padavigampola dolmen, we are unable to ascertain its true origin, but I learnt later that the nearly seven feet high dolmen was used to bury people of high social status such as, village chieftains, while urns were used to bury the common people. The dolmens with raised roofs perhaps served even as dwelling places, though no explanation is provided as to why people would have lived in these burial sites.

Apparently the first sign of building in Sri Lanka, this pre-historic dolmen in Padavigampola is the first of its kind to be discovered on the island. Inside it is eleven feet across and nearly seven feet high, so you can just about stand upright. Smoothly engraved on the inside of the right hand slab is a symbol from the Megalithic era.

This is probably believed to be a fixed door to the rock chamber in ancient times. Massive, monolithic, unexplained but definitely man-made, it is the first solid link with our early past. One could only wonder how such massive pieces of stone were fashioned, how they were moved and how they were raised, one above the other.

When I visited this place a decade ago, it was a less developed site with a small shrine room and the path was overgrown with thorny shrubs and there were no buildings.

The massive Bo-tree was the sole exception. But today, the surrounding area is highly developed with urbanization.

Ven. Alapitiye Pannasara Thera, who has been residing in the Maliyadeva Guharamaya Vihara since 2009 adjoining the dolmen told me that the place was developed as a tourist destination for local and foreign tourists who come to visit the world famous elephant orphanage of Pinnawela, just seven kilometers away from this site.

There is folklore interwoven around this site. One says, the dolmen had erupted abruptly for the Maliyadeva Maha Rahat Thera, who is believed to have been the last Arahat Thera in the country. The story goes, while the Thera was staying at Wattarama, the adjoining village of Denagamuwa where he visited one of his sisters, and on his return trip, he had rested awhile under the Bo-tree at Padavigampola.

While resting under the tree, it is said, a sudden rain was experienced in the area and to protect him from the rain, this dolmen had erupted at the site due to the Thera’s meritorious deeds.

Rectangular in shape this curious structure is shaped somewhat like the dining table of a giant and I could almost imagine the stone seat or chair that would go with it.

However, more recently it has been attributed by the folks to the shelter and dwelling of the Maliyadeva Thera and so they call it the Galmessa and the Purana Sri Maliyadeva Galmessa Viharaya-Padavigampola.

Some scholars who have analyzed the structure say, they were chambers for the dead or temples of a primitive cult. However, Charles Godakumbura, a prominent archaeologist and a former Commissioner of Archaeology in Sri Lanka has expressed the view that these places could have been used as shelters of pre-historic inhabitants.

The huge rock slab on the top around two feet in height is leaning to the right side and the two huge iron bars have been put up to stop the sinking of the rock slab, by the Department of Archaeology, in the recent past.

“Now, the right side rock slab is gradually subsiding and one day it will sink completely. So, I kindly request the Department of Archaeology to look into this matter and take necessary action to restore it,” said Ven. Pannasara Thera pointing out the sinking rock slab of the dolmen at the site.

“As a large number of schoolchildren around the country come to the site on field tours, the protection of the dolmen remains a big task and documentation would help describe the contribution of Padavigampola which links to pre-historic era, as a historically important place for future researchers,” the Thera said.

It was hard to believe that we were barely four kilometres away from the bustling town of Rambukkana. But then, one finds peace and tranquility in the most unexpected of places, Padavigampola being a fine example. 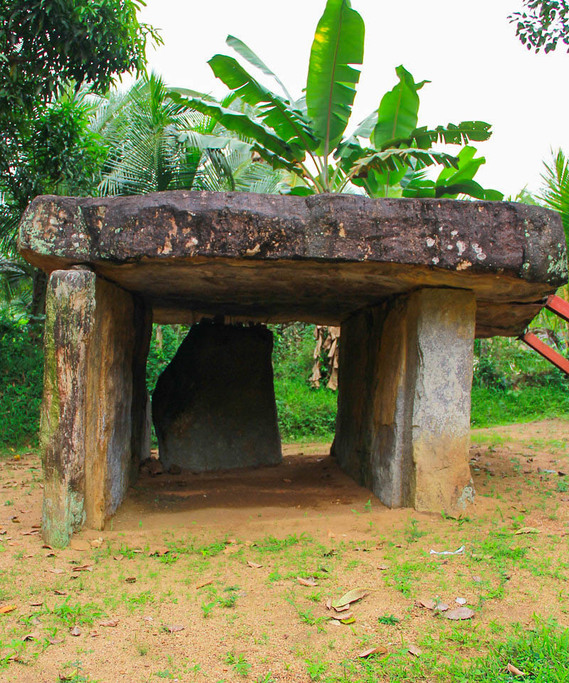 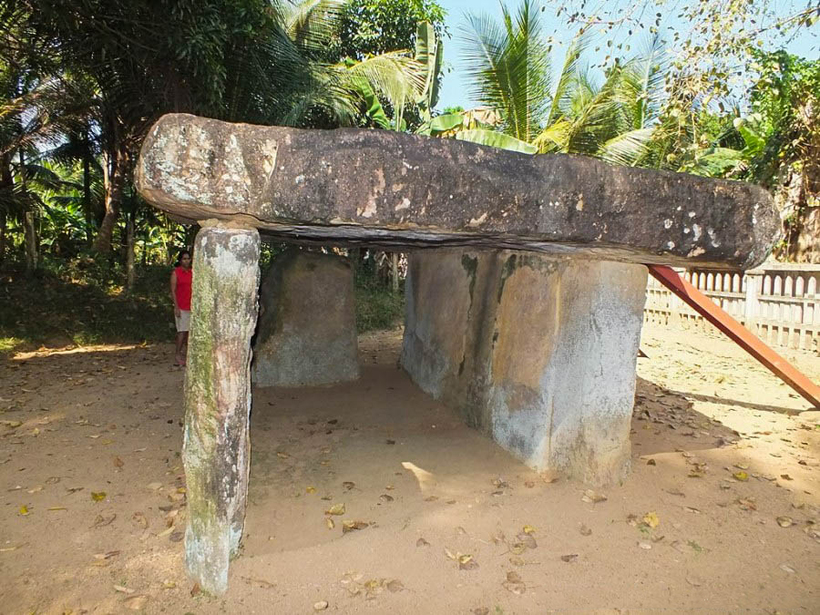 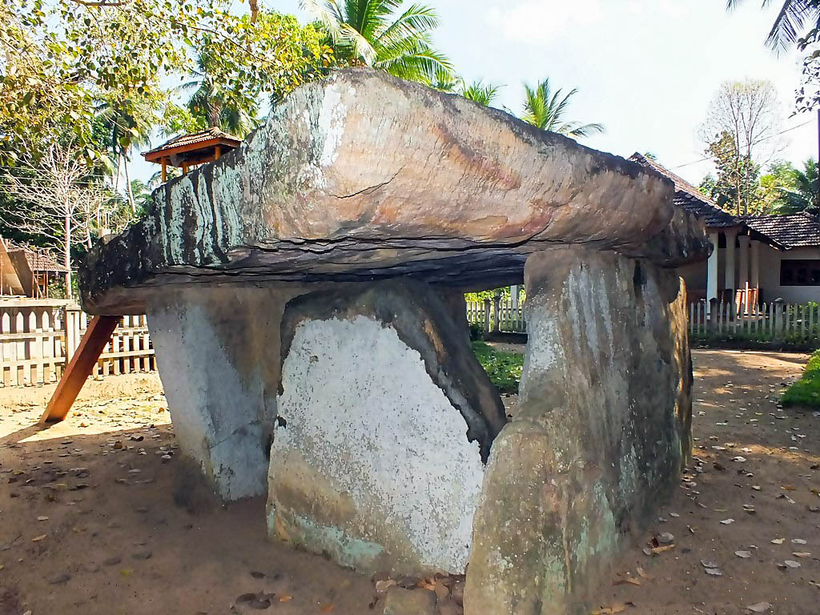 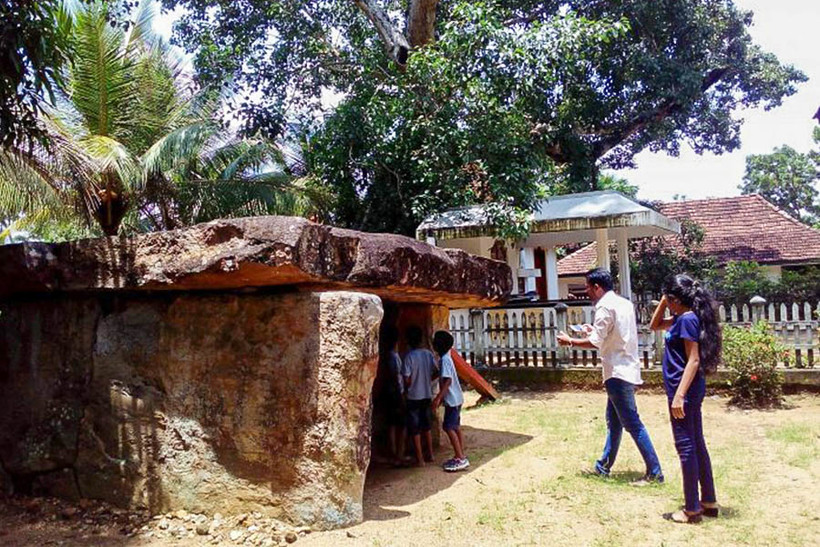 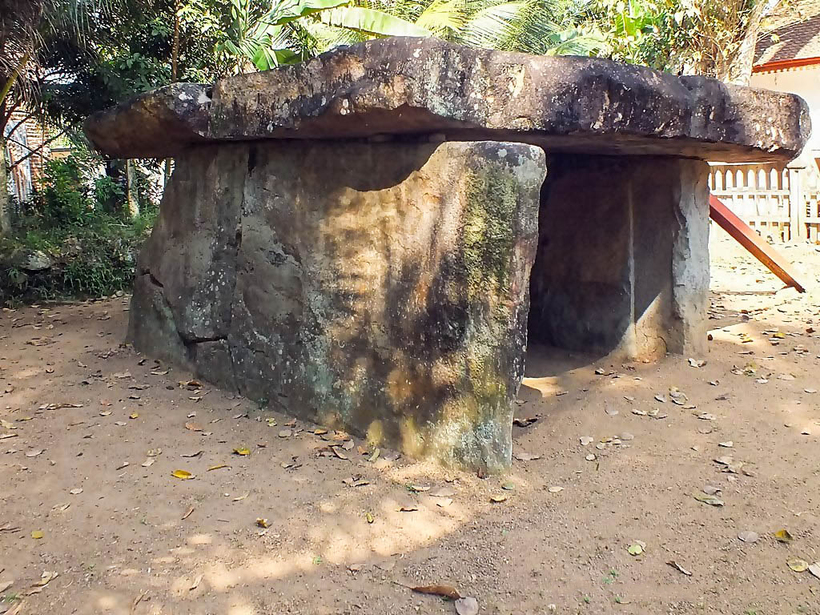 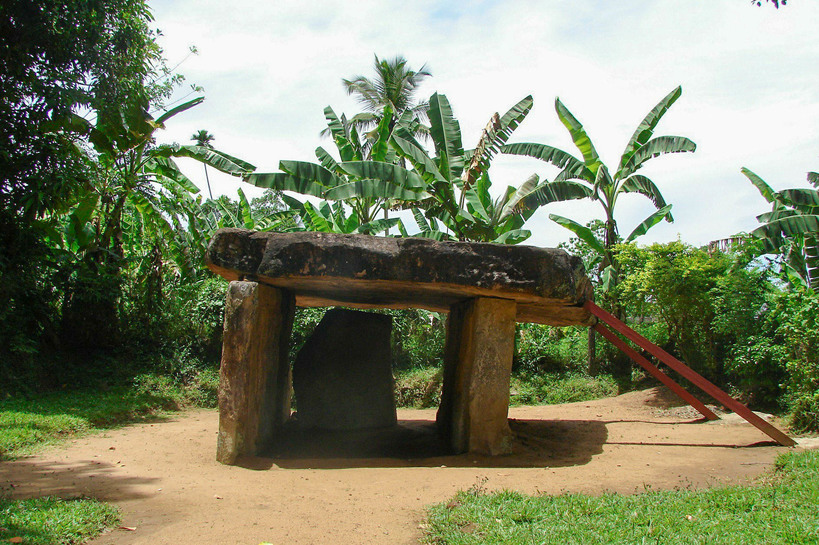